Breaking News! Little did we all know, but both Rush Limbaugh and Karl Rove are actually disguises! See the story and photos below.

Well, sorry folks. If you came here to view Rush Limbaugh’s secret identity, it has been removed.  The copyright owner contacted me and…. Well, let me explain in more detail. You see, I found that image I had previously posted here, and only the image, floating around Facebook. Hell, most of what is on there is created by Facebookers who have pages, especially during this past election. It’s natural to assume that image I had posted here was one of them. Well, apparently not. It was created by a website called Citizen Schwartz, and he actually got rather nasty. Accused me of stealing the image and altering his story. Well, I can neither have stolen nor altered his story if I had no clue who wrote it and what site it came from. Normally I am very happy to credit back the owner as the few who have contacted me have been so kind. They’ve actually contacted me just to let me know who the owner is. So I happily provide the credit to them. But this person wasn’t nice. So I removed it all.  Oh, and if he bothered to scroll down to my info at the bottom, it clearly states that if I do not have the credit listed for whatever media I am sharing, it is because I do not have it nor know it. One thing about me, and all my subscribers will attest to this, is I DO NOT STEAL WORK NOR GRAPHICS.

Oh, btw…. Did you get approval from FOX News for using an image from their broadcast and includes their logo? I didn’t think so.

The internet has grown at an exponential rate these past few decades. And with that, there is still a lot of gray area about what one can do and cannot do on the internet. Now, the reason I say this is because I have a rule I tend to stick by… If it is my work, my graphic, my story, etc., and I post it on the internet, then I have accepted the fact that I have basically given the keys to my car to anyone that needs to use it. That’s just the way the internet is. Doesn’t mean it’s right . Doesn’t mean it’s wrong… it just is. With that having been said, if there is something I do NOT want people grabbing and sharing, then I simply do not post it on the internet. I have many graphic designs not available to the internet public. And the few I do have on the internet are watermarked in big letters across the image. If someone is good enough to clone over the watermark, then they deserve that image. That’s not an easy task to do and keep the image looking untouched. Sure, if people share my stuff, I would appreciate the acknowledgment, but if it doesn’t happen, then it doesn’t happen. There’s something about that warm and fuzzy feeling of personal satisfaction I get when I see that something I created was used by someone who thought it was worthy enough to share. That’s good enough for me, and actually means more than a credit link back.

There are so many other things to worry about in this world first. Time to put this at rest.

First, though, the comment to “remove or credit” is down in the comment section if you care to check it out. Yeah, I got a bit nasty back. Guess I am in one of those ornery moods tonight. Damn Boehner is pissing me off….. He’ll never change. He just needs to be voted out, end of story. Anyway….

Okay, one more comment…. I actually just returned from checking out a few stories on the Citizen Schwartz website. I have to admit, there’s some pretty good stuff on there.

On the other hand, I did create the Karl Rove and canned ham story. I created the image, but the ham with glasses was taken from Facebook as well. The story is lame. Still, Rove does look like canned ham.

After Karl Rove’s meltdown on FOX News on November 6th, when it was announced that Obama got Ohio, Rove was seen acting very oddly in his dressing room. More oddly than normal. He was overheard mumbling to himself, “I am Hormel. I am NOT a cheap piece of Oscar Meyer or Plumrose. If they only knew who I really (h)am…” Then Rove began attempting to push cloves into his forehead, again, muttering under his breath, “…not spam…” over and over again.

Later that same night, the astonishing news was released that Karl Rove is, in fact, actually a slab of canned ham. 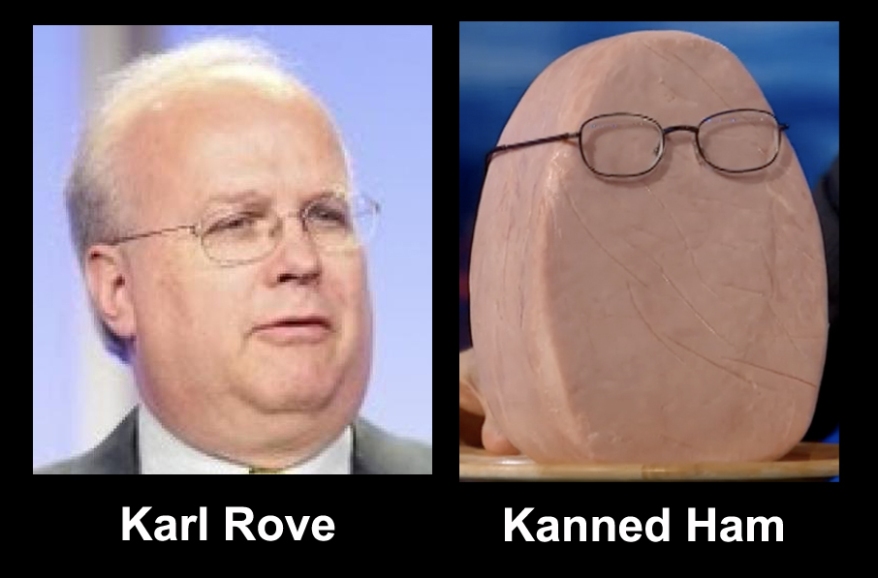 Truth really is stranger than fiction.