Did you know that Trump removed White Supremacist groups from Terror Watch Program?

While the country is up in arms over the multi-country ban put in place by Trump, he stealthily removed the KKK and other white supremacy groups from the “Countering Violent […] 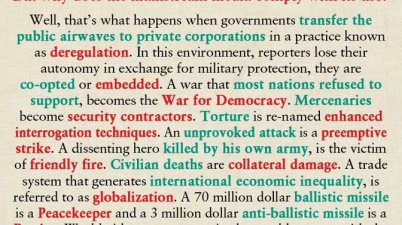 Government Doublespeak | To deceive and confuse

“Doublespeak. The deliberate use of ambiguous terms in order to deceive the public, is designed to make lies sound truthful and murder respectable, and it’s the kind of language we […]

TEPCO released footage for the first time on Wednesday of the Fukushima Dai-ichi nuclear power plant Unit 3 reactor’s spent fuel pool. The fuel rods, covered in debris from the […]

In light of the 25th anniversary of Chernobyl, which has followed the news of the disaster at the Fukushima Daiichi Nuclear Power Plant, I did a bit of poking around […]