Three pickup trucks of TransCanada’s Keystone XL construction workers are arriving on Highway 2088 outside Winnsboro, Texas. Their purpose? Tear down the trees, clear the brush, flatten the land, and […] 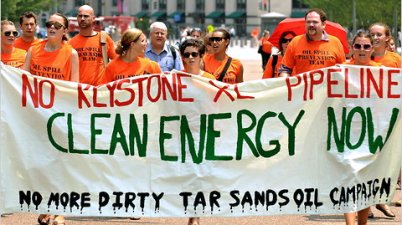 The Keystone XL pipeline was denied today by Obama – at least for now. TransCanada will be allowed to refile. This is hailed as a huge victory by those opposed […]

Today, the Sierra Club is gathering with allies from around the country to encircle the White House with 5,000 people and rally against tar sands. Can’t make it to D.C.? […]

Actress Daryl Hannah has joined the over 500 people who have been arrested since August 20 for a sit-in protest outside the White House.

Tar Sands: The Most Destructive Project on Earth

Environmental Defence has released a report calling the Alberta Oil Sands the most destructive project on Earth. Few Canadians know that Canada is home to one of the world’s largest […]