The Greatest Protest in History Has Just Started

There have been so many large protests throughout the history of mankind, but in my opinion, so many sites going black ranks now as Number One!  The organization, the participation […] 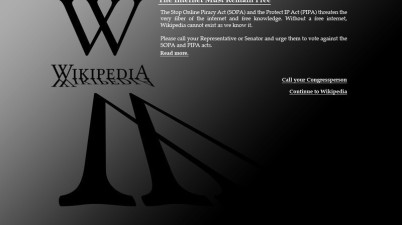 Wikipedia has apparently joined the ranks of several high-profile websites that are planning a “blackout” on Wednesday, January 18, in protest of Congress’ proposed anti-piracy legislation. During the blackout period, […]

US to Extradite UK Student for Copyright Infringement

Want to understand just how insane things may get under SOPA/PIPA? Just take a look at what’s already happening under today’s laws. Back in 2010, one of the first websites […]

“The potential for abuse of power through digital networks – upon which we as citizens now depend for nearly everything, including our politics – is one of the most insidious […]

WordPress Comes Out STRONGLY Against SOPA/PIPA

I have been doing the “happy dance” since I read that WordPress is now strongly voicing their opposition to SOPA/PIPA.  If you are not sure what SOPA/PIPA (yeah, I know… […]

Stopped They Must Be; On This All Depends | SOPA PIPA

Just blogged today on Reddit’s blog: The freedom, innovation, and economic opportunity that the Internet enables is in jeopardy. Congress is considering legislation that will dramatically change your Internet experience […]