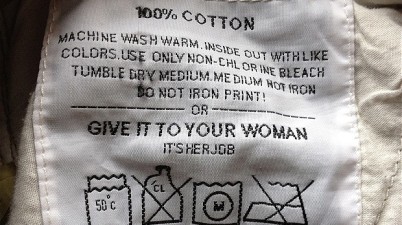 A British clothing company known as Madhouse has put a statement on the washing label, immediately underneath the washing instructions such as “Machine wash warm”, that says, ” – OR […]

Reports that Republican presidential candidate Rick Santorum will be receiving Secret Service protection this week has kicked off an unlikely competition in the Twitter-sphere. Political commentators The Young Turks are […]

One of the recent hot trends on Twitter now is to replace a word in a film title with vagina and being posted with the hashtag #ReplaceFilmsTitlesWithVagina. How this was […]

Two British tourists were barred from entering America after joking on Twitter that they were going to ‘destroy America’ and ‘dig up Marilyn Monroe’. Leigh Van Bryan, 26, was handcuffed […]

One Year Ago #jan25 The Hashtag Tweeted Around the World

It was one year ago I was one of many who sat glued to the internet watching the birth of a revolution which grew worldwide. Yes, it was first in […]

The Best Statement Yet On Why Stopping SOPA/PIPA Must Succeed

By far, this is the best summaries I have seen yet about why it is important to stop SOPA/PIPA…. It’s not a coincidence that the Global Democracy Movement is happening […]

Wikipedia has apparently joined the ranks of several high-profile websites that are planning a “blackout” on Wednesday, January 18, in protest of Congress’ proposed anti-piracy legislation. During the blackout period, […]

It Is “Pick On Twit” Night… I mean, Mitt

One awesome (and anonymous) person decided to put together a short but sweet Google Doc called “SOPA For Dummies” to help explain this bill is simplistic terms. Here is the […]