Bobby Bradley reached a new height this morning after becoming the youngest person to fly solo in a balloon.  The 9-year-old took off at dawn in Tome, N.M., near Albuquerque.

He was joined by three other balloons in his brief flight as family, friends and a crowd of 50 supporters cheered him on from the ground.  Bobby landed safely after about 26 minutes in the air.

Bobby already has 30 hours of flight experience with his mother and father, and has been practicing with the balloon tethered to the ground or a truck. He wears a harness and a helmet.  “This was his idea,” said Tami Bradley, his mother. “He started taking control of the burner when he was 4 years old.”

Under FAA regulations, he would be too young to fly a full-size balloon until he turns 14. His homemade airship, the Heavenly Dream, weighs less than 150 pounds and may reach an altitude of 1,000 feet.

My experience in a hot air balloon, Albuquerque NM

I only live about 5 minutes from the Albuquerque International Balloon Fiesta Park, and when I flew for the first time last summer, I had no idea just how much work is involved with piloting.  I’ve seen them set up the balloons many times during the annual fiesta, and was quite aware of the organization and coordination involved, but the actual piloting is much more detailed and technical than I was aware.

The pilot I flew with, Don, was highly experienced with thousands of hours of flight time under his belt.  He just relocated to Albuquerque to assume the job as the director of the annual balloon fiesta.  Don also pilots a special shapes balloon “Paddy“, and flying a special shapes requires even more training and flight time.  Plus additional crew members are required simply due to the size of the balloon itself.

There are many aspects to flying a hot air balloon of which I was aware of before I flew, but did not actually become concrete to me until I was soaring ever so serenely hundreds of feet above the Rio Grande river.  On that day, there were approximately a dozen or so other balloons flying, and Don was very aware as to the position and travel pattern of the other balloonists.  This was not to avoid collision, as that is very rare, but he watched to determine what the thermals and air stream was doing at each balloon location.  Depending upon ones altitude, the flight path may change greatly, and it takes a very wise and well-seasoned pilot to use these thermals to ones advantage.

During the main part of the flight, the winds peacefully float us along while we would take in the scenery, and marval at the miniature homes, traffic, people, horses, and dogs spread out beneath us.  The dogs.  Dogs simply just do not like hot air balloons.  For two years, I lived in the typical flight path of the “box” effect (see below).  My dogs, as well as all the neighbors dogs, were literally crazed… running back and forth constantly in a barking frenzy.  During the fiesta, the majority of responsible dog owners simply bring their pets inside during the morning flights.  When lofting in the air that day, I must admit that watching the dogs go crazy was mildly amusing.  From the dogs point of view, a large strange behemoth approaches from above frequently putting out a thunderous blast.  Dogs duty:  run, bark, and chase… must rid the skies of this beast overhead.  Threat floats off.  Job completed.  Do not get me wrong, I have raised and trained dogs my entire life, and am a true hard-core dog-lover.  But there is always humor in everyday life, and watching the miniature dogs from above was entertaining.

Box Effect: Part of the reason for the success of the Fiesta are the cool Albuquerque morning temperatures in October and the Albuquerque box. The “box” is a set of predictable wind patterns that can be exploited to navigate the balloons. At low elevations the winds tend to be southerly (from the south), but at higher elevations they tend to be northerly. Balloonists use these winds to navigate in a vertical box: they ascend slightly from the launch park, move south, ascend further, move north, descend, and repeat the box or land back in the launch park or quite nearby. During events involving on-field targets, such as the “Key Grab” (where pilots attempt to grab prizes, including a set of keys to a new vehicle, from atop tall, flexible poles), it’s not uncommon to see the same balloon make 5 or 6 passes at the targets, simply by working the “Box” to keep returning to the field. 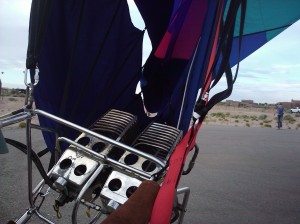 The landing appeared to me to be the most technical part of the flight, both with piloting the balloon and coordinating via radio with the chase crew on the ground.  The pilot, having watched the flight pattern and winds during the entire flight, would take advantage of watching the other balloons ahead as they descend through the various thermals.  A large field with road access is the prime spot to land.  With skill and expertise, Don would carefully time both hitting the burner and releasing air from the envelope in order to land in the targeted spot.  The chase crew leader is well-seasoned and just as experienced as the pilot.  They were waiting ever so faithfully on the ground to assist with bringing the balloon down safely.  The basket touched briefly, re-ascending a few feet, while still moving forward, then eventually came down in a perfect landing.  The chase crew now having surrounded the basket and using weight and expertise to halt our movement.

I still chuckle to myself… another person along for the ride was a local news anchor-woman.  She is from New Mexico, and with the Albuquerque International Balloon Fiesta being the an international event as well as the largest in the state, all news stations heavily cover the event and know it very well.  As we began our descent and Don was relaying our landing plans to the chase crew, the anchor-woman asked, “We don’t land where we took off?”  Without blinking an eye, nor cracking a smile, Don politely replied, “Nope, these are one-way trips only.”

What this young 9-year-old boy did was not an easy feat.  From my limited experience, it is easy to see that there is much more involved than hitting the burners, ascending, releasing the air, descending and landing.  Especially the landing.  Having lived in Albuquerque for 10 years now, and especially during the fiesta, balloonists do not always land where they want to.  They have landed in the middle of intersections – which maneuvering through the power lines is as delicate as walking a tightrope; landed in the river when they were targeting an open area next to the water; in the middle of a herd of cattle; and so on.  There has been occasion where the not-so-lucky tangled up with the power lines, which turns in to a life-or-death situation.

I am sure Bobby will keep looking up to the skies and will very soon have his pilot’s license.  He has very wise, experienced, and supportive parents along his side.  He will achieve his dreams.