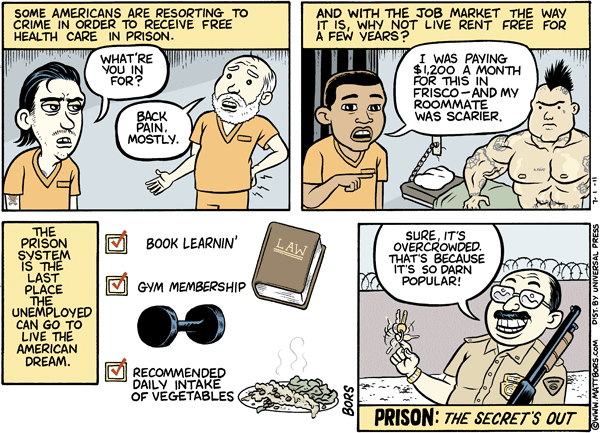 James Richard Vernone of North Carolina put 17 years of work into Coca-Cola, following “the rules” by being a productive member of society, only to be laid off three years ago.  After his layoff, he did not just sit around trying to live off of unemployment, he found employment – during the time when our economy was collapsing – as a convenience store clerk.  He understood it was a job, while many Americans snub their noses at such unemployment, and did what he had to do to bring in a paycheck.

However, like many businesses and jobs, health care was either non-existent, or too expensive based upon income to purchase.  I’ve been there, I know.

Eventually, he developed arthritis and carpal tunnel syndrome, and noticed a large protrusion in his chest – the pain soon become intolerable to unbearable.  After being denied disability by our government, he made a very difficult decision – one of which he felt he had not choice to do – and robbed a bank for one dollar in order to receive health care.

It was a very passive robbery by simply passing a note to the teller, then waiting quietly and patiently for the police to arrive.

What’s sick is it costs the taxpayer a whole heckuva lot more to incarcerate someone than to just give them the healthcare they need. Between stories like this and the millions of people who get their primary care in emergency rooms, we would be spending WAY less if we just provided basic universal coverage. Why is that so hard for people to grasp?

When people say “why should I pay for someone else’s healthcare?” I tell them “You already are!  You’d just be paying a lot less if we had a single payer system!”

And for those who argue on a tangent that our prisons are luxurious and we “spoil” our inmates….  I suggest you go stay in one for a while then give us your report post-incarceration.  I will be you’ll be singing to another tune then.  That is, IF you make it out alive….

Mr Verone is now receiving medical care – which is minimal in lock-up, but better than none.  The doctor is accusing him of manipulating the system, to which he responds, “If it’s called manipulation, then out of necessity because I need medical care, then I guess I am.”  Talk about manipulation… how about those people like the Koch Brothers who spend millions of dollars in lobbying to control what our elected officials do… These are the people who vehemently oppose public health care.

The United States is the only wealthy country that does not offer comprehensive universal health care to every citizen; in no other rich country would anyone be faced with such a choice that Mr Verone was forced to make.

Shame on us… Shame on the Tea Party/GOP’s… and shame on the insurance companies for putting gross amounts of profit above the purpose of your business… to supply medical treatment for those in need.