More details about the Random Number Generator and it’s results that “predicted” 9/11?

Since my recent posting – more like a ranting – about the Princeton Random Generator which “predicted” 9/11, my curiosity rose.  My abhoration for statistics had stopped me from researching previously.  But now, this EGG contraption was eating away at my mind like termites devouring pine.  So, off to the internet search engines I go.

My first task at hand, what is an EGG?  I was not satisfied by my previous finding.  I wanted more detail.

Naturally, my first source to search is the main site about the Global Consciousness Project, which is the ultimate name of the research conducted which resulted in the 9/11 prediction.  Here, sadly, I am only able to find a rather generalized reference to the existence, placement and usages of said EGG’s around the world.  No tangible description of the what type of information an EGG collected.  Next source, Wikipedia.  If you are not aware of the background of Wikipedia, this is one of the most reliable open source databases on the internet.  The highest number of PhD’s per capita of combined authors provide their insight from several points of views and resources.  References are always provided in footnotes for every topic or subject.  This helps minimize biasness in descriptions when multiple sources are integrated into one compilation.

I did search through other various sites, but found that Wikipedia did provide the best description (you may reference their site on Global Consciousness Project for more details):

“The remote devices have been dubbed Princeton Eggs, a reference to the coinage electrogaiagram, a portmanteau of electroencephalogram and Gaia. Supporters and skeptics have referred to the aim of the GCP as being analogous to detecting ‘a great disturbance in The Force.’ “

I love the reference to “The Force.”  That’s good!  In a nutshell, though, these EGGS record the electrical transmissions emitted from humans en masse.

Now I am satisfied.  I do not need to know the specific makings of an EGG.  It is a long known fact that the human mind produces electrical transmissions via neurons.  Anyone who is familiar with an EEG (electroencephalogram) knows this.  Therefore, it is assumed that the inner makings of an EGG is not unlike how an EEG is designed and built.  There may be a drop of Holy Water just for added assurance….

I still take my eggs over-easy if you don’t mind.

Next… 9/11 EGG results.  From the Princeton site, it is described:

“The GCP instrument is a network of random number generators (RNGs, sometimes called REGs) spread around the world. There are currently about 65 or 70 nodes in the network, and at each one, random data trials are recorded continuously, one trial per second, day after day over the past 13 years. The result is a database of synchronized parallel sequences of random numbers. The data are archived on a server in Princeton, and subjected to formal analysis testing whether there are departures from expected randomness corresponding to global events.”

In my previous posting, I challenged Princeton to send me more information about their EGG’s not having predicted other worldly catastrophic events.  Well, they didn’t – which I never expected – but I did find a posting on their GCP site listing what they feel are a long list of events which corresponded with the flux in data accumulated at that point in time.  Here is an snapshot image from their site.  This is an IMAGE so the hyperlinks are not linked… click here to go to see the full list. 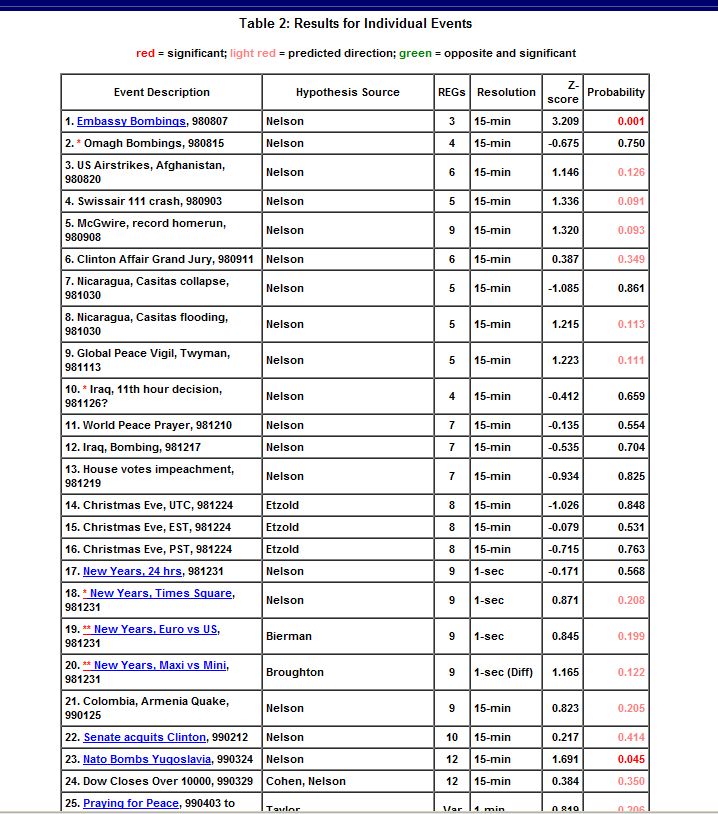 Sounds amazing right?  Well, from the researchers of the GCP it is.  But that is THEIR point of view…

A quote from one of my Geology professors I previously posted:

“Statistical numbers must be used carefully.  They can provide you with factual data, or a bunch of $#!&@!.  It is no secret that the same set of statistics can be provided to several different groups.  And each group, working independently of the others, are able to achieve different results dependent upon what outcome they are striving to achieve.”

The best manner in which to come to any conclusion is to gather data from various sources.  So, in using the Wikipedia sources located at the bottom of the GCP page, I find a “Global Consciousness Project: An Independent Analysis of the 11 September 2001 Events.”  Here a research team has taken the same numbers which the Princeton crew used and came up with DIFFERENT RESULTS simply by changing the odds parameter.

By viewing the above charts, with the odds at 6 hours, the spikes occur at similar times to the major times of tragedy of 9/11.  If you use an over all curve, it is primarily one bell curve during the 9/11 duration.  Now, adjust the odds to 3 and 1 hour(s), peak occur prior to 9/11.  At 8.3 minutes, nothing really stands out.

Now, who dictates, or writes in stone, that the 6 hour window is the only correct parameter to use?  Well, the Princeton team because THAT IS THE PARAMETER WHICH GIVES THEM THE RESULTS THEY WANT TO SEE.

Have I made my point?

Now, there is still another task at hand… the long list inserted above of the other “major” events which occurred during the flux in data retrieved from the EGG’s….

Here is my argument for this data… At any given window of time at any point in time, there is always something going on somewhere in the world.  Right now, there may be a mass prayer in Timbuktu for all we know.  So, when a variance in data is found, let us search around the world to see what may have been occurring during that window.  And this list gives those results.

“Oh, a spike in data.  Let’s see what this may correlate to…”

The machine, again, does not predict major events.  The GCP team has taken data and skewed it to achieve the results they want.  Who knows… maybe the data is recording the electrical impulses from a abnormally high amount of people around the world all achieving orgasm simultaneously?

I am now finished with the topic.  Please, folks, think logically.