Bystanders LIFT a burning car to save trapped motorcyclist 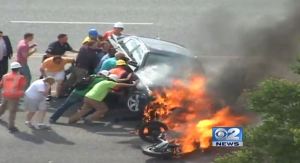 A motorcyclist who was dragged beneath a car Monday in Logan was rescued by bystanders who helped police lift the burning car and pull the man out from under the wreckage. He was reported to be in critical condition Monday night.

Brandon Wright was riding east on U.S. Highway 89 about 11:40 a.m., when a driver steered his BMW 530XI into the motorcycle’s path from a parking lot across the street from the Utah State University campus, said Assistant Logan Police Chief Jeff Curtis. The driver of the BMW did not see Wright, who laid down his bike and slid into the car.

The motorcycle and Wright were pulled under the car, where the motorcycle’s gas line was severed, causing the bike and the car to catch fire while he was trapped underneath, Curtis said.

Several bystanders rushed to the car and lifted it off Wright while officers and other witnesses pulled him out and moved him to safety.

Wright suffered broken bones, cuts and burns, Curtis said. The driver of the BMW was not injured but “was shaken up, obviously,” he said.

Firefighters put out the flames shortly after the crash, Curtis said.

All, News: US
bystanders, lift burning car, motorcyclist, save, trapped, trapped under car