On Saturday, a retired bishop was among more than 50 people arrested after the Occupy Wall Street movement stormed another New York City park in an attempt to find a new home.

Former Episcopal bishop George E. Packard was led away in cuffs after climbing a ladder to illegally enter Juan Pablo Duarte Square in the west SoHo neighbourhood of the city during the demo.

Retired Episcopal bishop George E. Packard is pictured climbing a ladder to illegally enter Duarte Square during an Occupy Wall Street march in New York City. He was promptly arrested for his actions

He was one of hundreds of demonstrators, members of the clergy and elected officials who descended on the park and scaled a chain-link fence by a lot they’re eyeing as a new campsite.

Packard, who is affiliated with the movement, writes a blog under the title ‘Occupied Bishop‘.

He wrote a post just minutes before leaving for the demonstration, writing: ‘What awaits us I do not know.’

Following his arrest, his wife updated the blog with details of the day’s events, claiming she was repeated ‘kneed’ by a police officer.

She wrote: ‘On the other side of the chain link fence, the push came from the police. And it was intended to hurt… It was mayhem.’

Of her husband’s arrest, she wrote: ‘I am heartened to know he looks pretty happy in the paddy wagon!’

The protest came on the three month anniversary of the movement, police said. The park is owned by Trinity Wall Street Church.

According to NBC New York, church officials said that while they support the protestors, the space is not theirs to occupy.

Packard was taken to a bus waiting by the demo in Duarte Park, near the city's SoHo neighbourhood 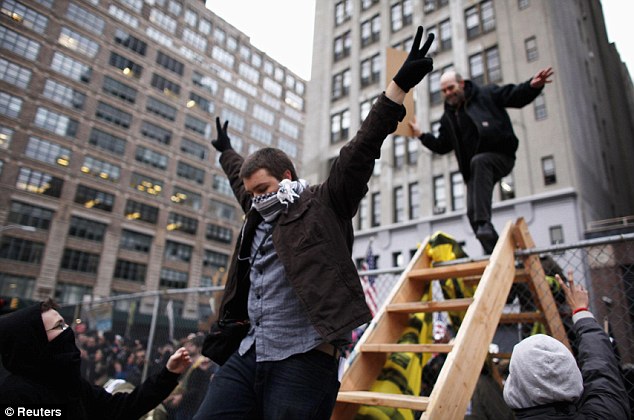 Occupy 2.0: Protesters descend a wooden ladder into a private area of Duarte Park in West SoHo to what they hope is their new encampment 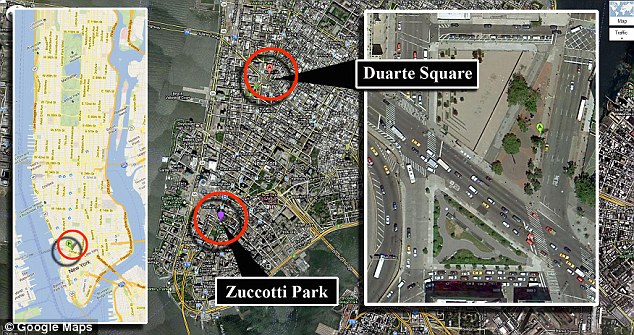 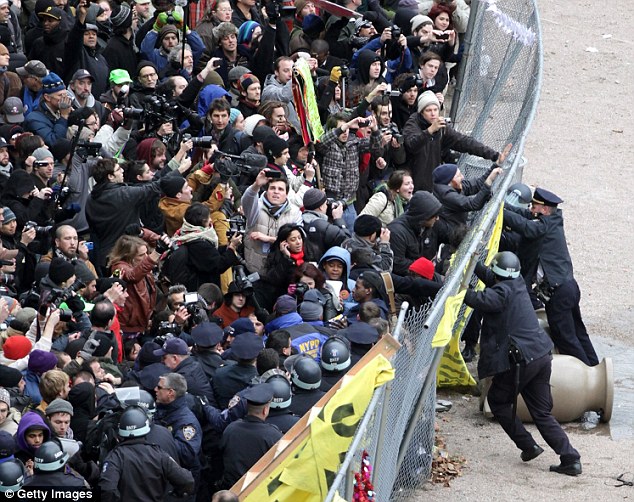 Three against a thousand: NYPD officers tried to hold back the crowd as they pushed through the fence

Re-occupy now: Protesters storm the park as they tear down the chain-link fence

In cuffs: At least 50 people were arrested after today's demonstration, police said