During the summer of 2011, which happens to be one of the worst droughts on record for those of us here in the United States Southwest, fires erupted all over causing mass destruction in many states.  I reside in Albuquerque NM, and we were very fortunate here in the city.  No large fires.  A few small ones sprang up in the Rio Grande Bosque, but were quickly put out with little damage.  However, Albuquerque, as well as a large part of the state, were victims from the mass amount of smoke and ash from the Arizona Wallow fires in June 2011.  The first picture below is one I took from my back yard late one afternoon.  No, it is not a setting sun… it is pink due to the thick smoke in the air.  Ash covered everything for several days, choked our swamp coolers, and caused a large increase of asthma related problems in the hospitals.  Below that are three photos I took from the north side of Albuquerque of the smoke pouring from the fires in Los Alamos (the Las Conchas fire), which threatened the nuclear lab facility there (home of the A-Bomb.)  Los Alamos NM is approximately 70 miles how the crow flies.

Following are other pictures taken from various fires, and drought, throughout the Southwest.  Arizona and Texas having the worst damage of them all. 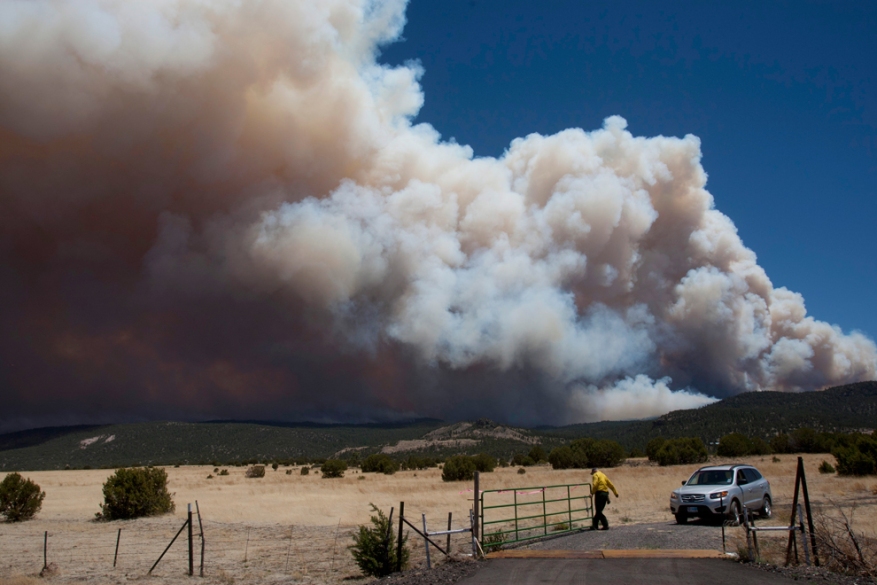 Arizona Department of Transportation workers prepare to close off a section of U.S. Highway 60 due to the Wallow Wildfire in Springerville, Arizona. A wildfire believed sparked by inattentive campers blazed unchecked for an 11th day in eastern Arizona leaving at least 600 square miles of pine forest blackened and menacing several mountain towns near the New Mexico border. The monster blaze, ranking as Arizona's second-largest wildfire on record, has chased up to 2,000 people from homes in and around two communities in immediate danger, Eagar and Springerville. (Joshua Lott/Reuters) 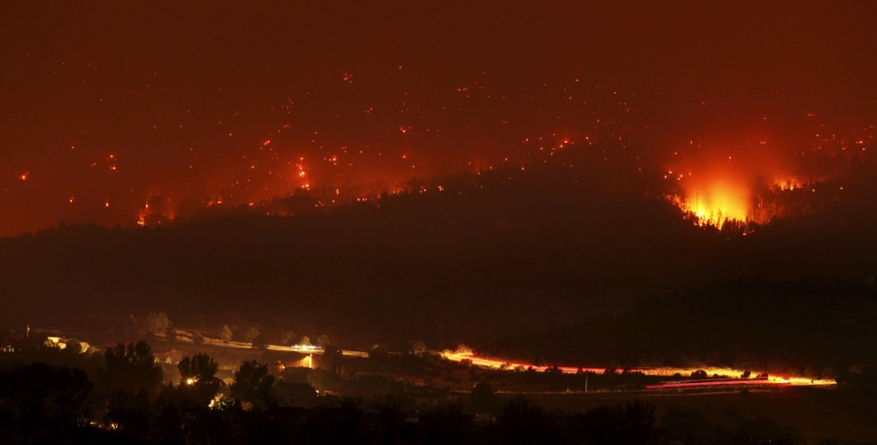 Firefighters sleep between trucks at the incident command post for the Wallow fire, June 8, 2011 in Springerville. (Eric Thayer/Getty Images) 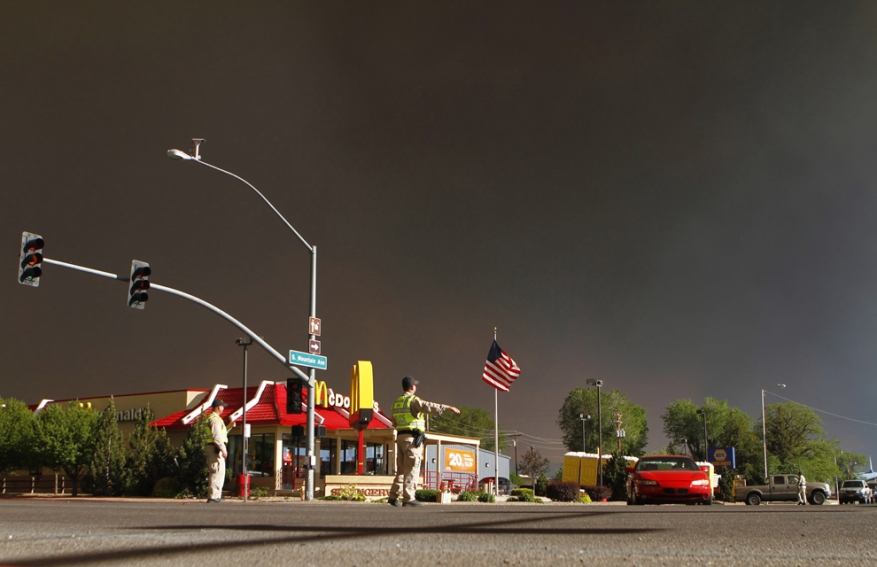 A vicious wildfire burns near the Los Alamos Laboratory in Los Alamos, N.M., on June 28, 2011. The Las Conchas fire spread through the mountains above the northern New Mexico town, driving thousands of people from their homes as officials at the government nuclear laboratory tried to dispel concerns about the safety of sensitive materials. (Jae C. Hong/Associated Press)

A NASA image taken by a crew member aboard the International Space Station, flying at an altitude of approximately 235 statute miles on June 27, 2011, shows the Las Conchas fire in the Jemez Mountains of the Santa Fe National Forest in north-central New Mexico. The fire is just southwest of Los Alamos National Laboratories. (NASA/Associated Press)

A tree burns near Los Alamos, N.M., on June 29, 2011, as crews fight to keep the wildfire from reaching the country's premier nuclear-weapons laboratory and the surrounding community and as scientists sample the air for chemicals and radiological materials. (Jae C. Hong/Associated Press)

Smoke from the Las Conchas fire turns the setting sun red over the Jemez Mountains behind the town of Los Alamos, N.M., on June 28, 2011. (Jim Thompson/Albuquerque Journal via Associated Press) 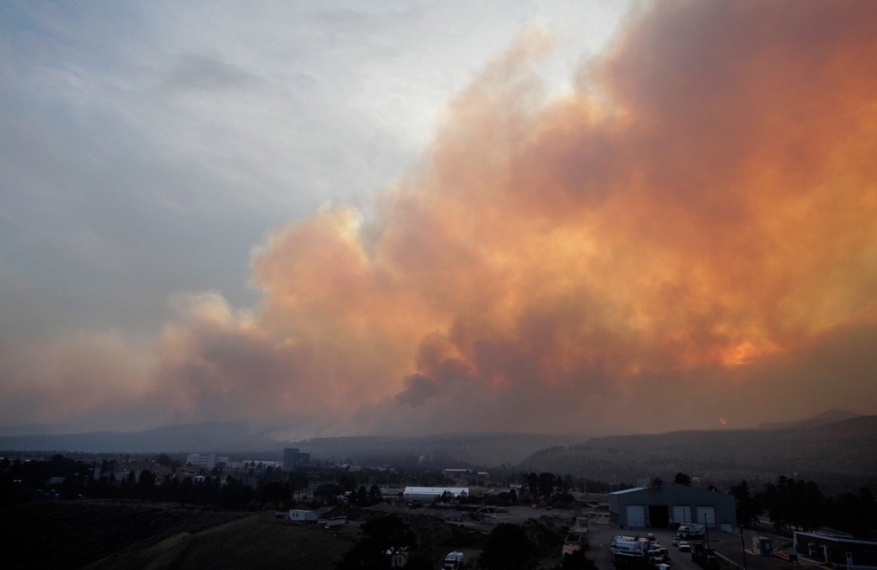 The top of a plume of smoke from the Las Conchas wildfire in the Jemez Mountains billows in the clouds, as seen from miles away in Rio Rancho, N.M., on June 26, 2011. Fire officials say the Las Conchas fire charred more than 3,500 acres since starting Sunday afternoon. Voluntary evacuations were issued for Los Alamos and White Rock. (Susan Montoya Bryan/Associated Press)

Michael Morgan hangs out in the Red Cross evacuation center set up at the Santa Claran Hotel in Espanola, N.M., on June 28, 2011, after evacuating from Los Alamos because of the Las Conchas fire. (Eddie Moore/Albuquerque Journal via Associated Press)

An air tanker drops fire retardant on a fire in The Cliffs development on August 31, 2011 near Possum Kingdom Lake, Texas. (Ron Jenkins/The Fort Worth Star-Telegram/AP)

Sailboats are left high and dry at Benbrook Lake in Benbrook, Texas on August 16, 2011. (LM Otero/AP)

A cryogenic tank from the Space Shuttle Columbia was discovered in an evaporating lake bed on the shoreline of Lake Nacogdoches in east Texas, part of debris from the 2003 Columbia disaster, on August 3, 2011. (NASA/Nagodoches Police Department/Reuters)

Dead fish sit mired in the mud of O.C. Fisher Lake on July 25, 2011 in San Angelo, Texas. The 5,440 acre lake which was established to provide flood control and serve as a secondary drinking water source for San Angelo and the surrounding communities is now dry. (Scott Olson/Getty Images)

Charred appliances and a fireplace are all that remain of a home in Possum Kingdom Lake, Texas on August 31, 2011, the day after a wildfire swept through the area. (LM Otero/AP) 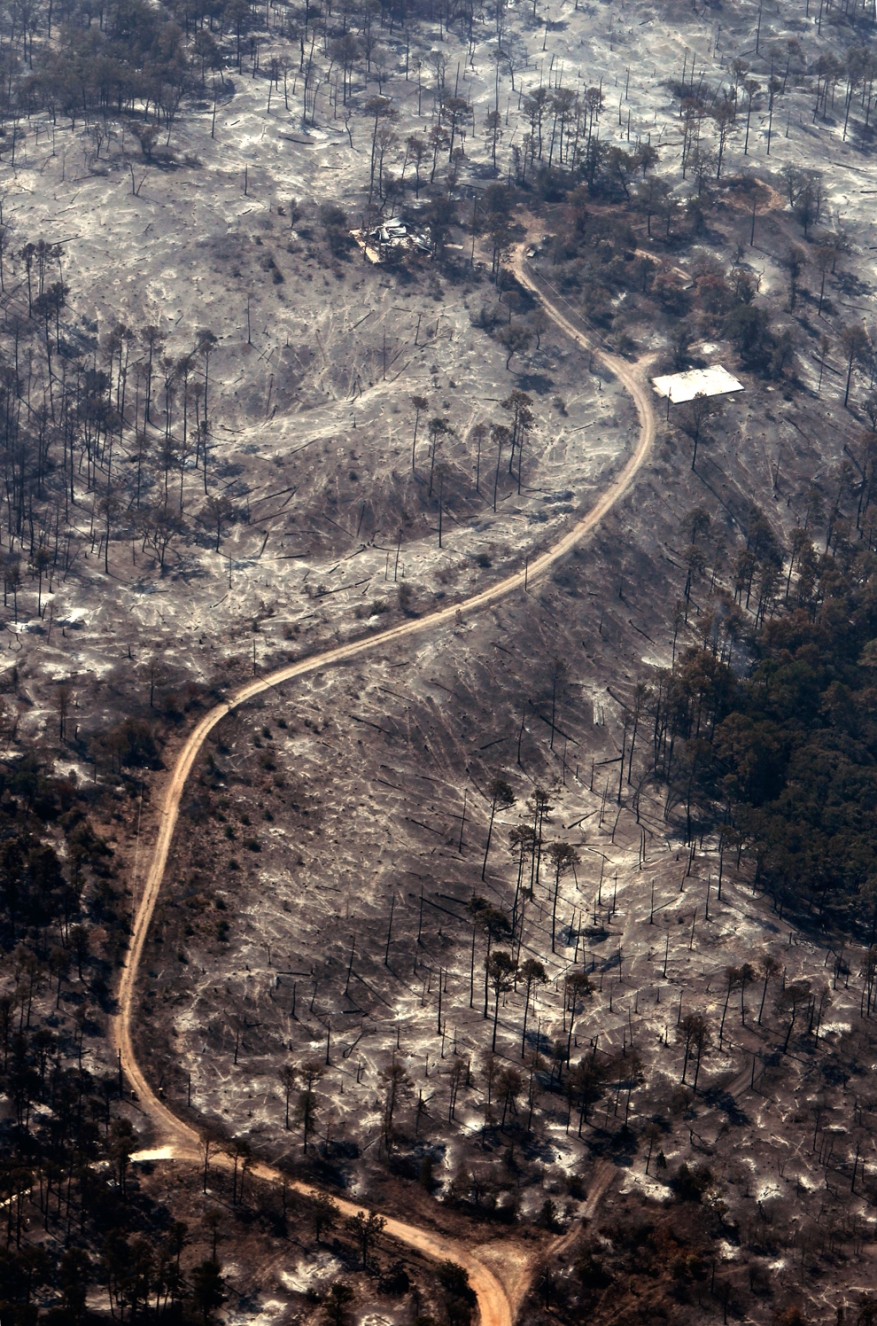 Flames engulf a road near Bastrop State Park as a wildfire burns out of control near Bastrop, Texas September 5, 2011. (Mike Stone/Reuters) 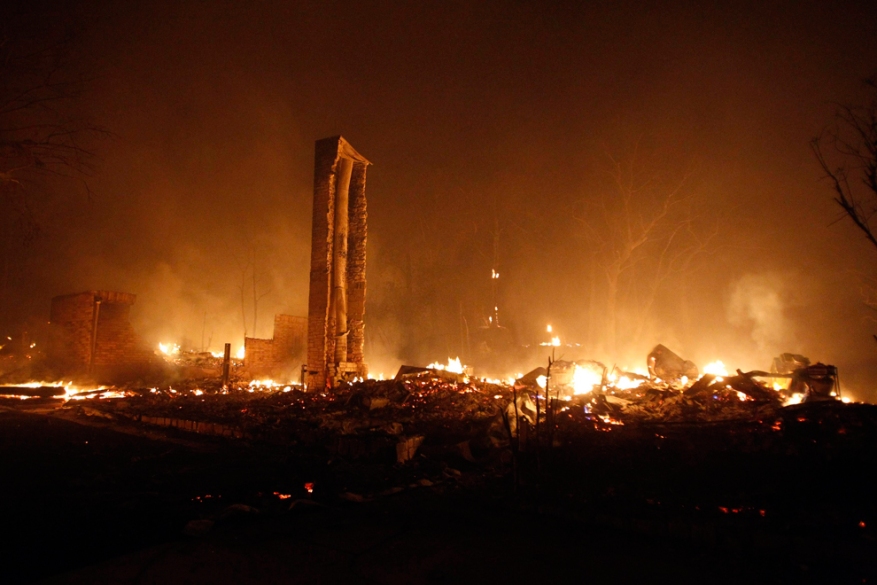 The chimney of a house remains standing as the rest of the building burns to the ground near Bastrop, Texas September 5, 2011. Sixty separate wildfires, whipped by strong winds, were burning across Texas on Monday. (Mike Stone/Reuters) 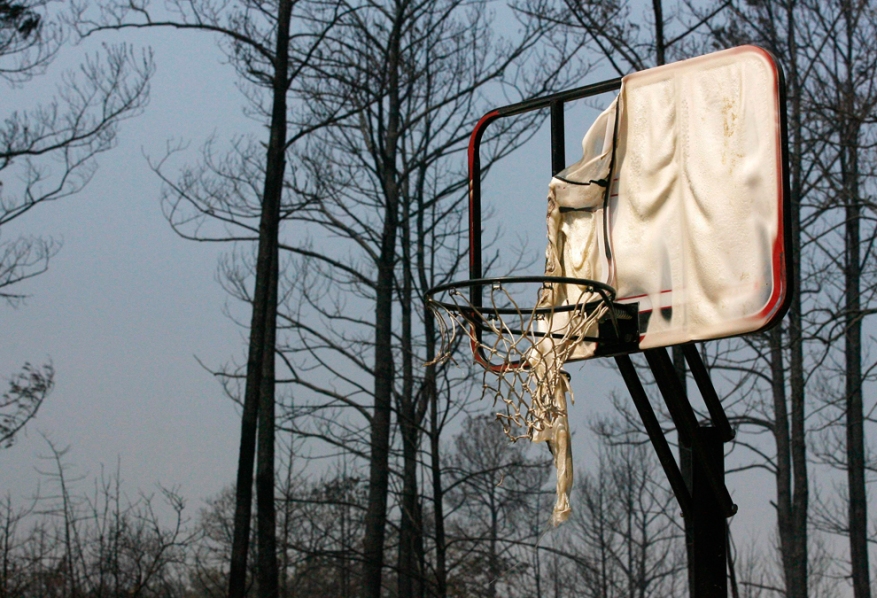 A melted basketball goal remains after a wildfire near Bastrop, Texas September 6, 2011. The Bastrop County Complex fire has destroyed up to 600 homes, the most of any single fire in Texas history. (Mike Stone/Reuters)

A statue stands charred in front of the remnants of a home on the east side of Lake Bastrop on September 6, 2011 in Bastrop, Texas. (Erich Schlegel/Getty Images

Astronauts aboard the International Space Station photographed east-central Texas on September 6, 2011, highlighting numerous smoke plumes caused by wildfires burning across the state. Smoke plumes are clearly visible to the east of Austin; to the north of Houston; to the northwest of Lake Sam Rayburn and Toledo Bend Reservoir; and to the west of Shreveport, Louisiana. Diffuse smoke is moving offshore into the Gulf of Mexico. Part of an ISS photovoltaic radiator panel is visible at image top center. (Reuters/Nasa Earth Observatory/Handout

Source:  Myself (Motley Photos/News) and Boston.com The Big Picture