On the eve of the second anniversary of the much-despised Citizens United ruling, activists with the Other 98% and Backbone Campaign put a giant dollar sign light projection, along with a few other messages, on the Supreme Court building to protest the ruling that undermined government of, by and for the actual people by defining corporations as people and money as speech.

Two years ago, the Citizens United ruling opened the floodgates to secretive and unlimited corporate political contributions and permitted far-right special interests like billionaires David and Charles Koch to wield undue influence over the Court and U.S. politics.

Watch this video… this is great! And the music only adds to it.


.
“The Kochs and their kind are engaged in a hostile corporate takeover of our nation’s political system,” said John Sellers, co-founder of The Other 98%. “We’ve come to the scene of the crime today – the U.S. Supreme Court – to tell the justices exactly what we think of the infamous Citizens United ruling that made that takeover possible.”

On the second anniversary of the much-despised Citizens United ruling, protesters gathered at the Supreme Court and unfurled a large banner reading “U.S. Supreme Koch” to protest the undue influence that far-right special interests and billionaires like the Koch brothers wield over the Court and U.S. politics. 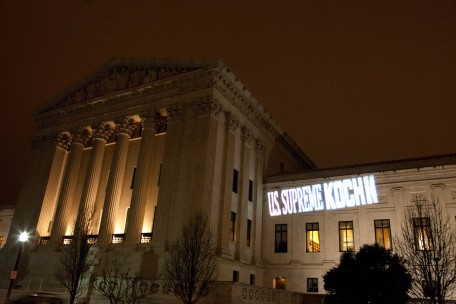