This is a guest post feature by a Republican Party member, Ron Hill, from his site republicans4freedom. As Ron states, he is “For the rational wing of the Republican party,” and expresses his frustration with the hijacking occurring within his party. Here he expresses many of the same concerns as I do in addition to many other Democrats and Liberals alike for the lack of common sense shown by Santorum. If the GOP as a whole would come to their senses and have the same beliefs as Ron Hill expresses here, then our country would have no choice but to move forward and grow strong once again. I absolutely love his closing sentence and is very refreshing to hear this from a GOP’er. I just subscribed to his site because I already respect what he has to say and am anxious to read more.

Take it away Ron….

“The whole purpose of this blog is to point out the extremism that has become popular in my party. My hope is that rational conservatives will then work to help bring the GOP back to the common-sense middle. The truth is that our party has gone off the deep end. It’s as if we’re watching the slow, painful death of a major political party. First it was Sarah Palin who couldn’t name one major newspaper she read, much less string together two logical sentences. Then came Christine O’Donnell who spoke out against masturbation and dabbled in witchcraft. About the same time we had Sharon Angle who suggested that armed insurrection was a possibility in opposing the policies of elected democrats. Then we had Michele Bachmann, whose only redeeming quality was making Sarah Palin look informed and thoughtful by way of comparison. Ms. Bachmann brought along her not-at-all gay husband, an unlicensed psychologist with a degree from an unaccredited on-line school. Their family business was found to be practicing the widely discredited and scientifically unsound “ex-gay” therapy. Both Bachmann’s apparently believe Jesus is too busy not curing the gays to bother with minor matters like ending war, African famine, Asian epidemics, or Americans murdering one another in large numbers. Most recently we were treated to Newt Gingrich, the thrice-divorced serial adulterer who – ironically – was the darling of the “family values” crowd. Among other extreme views, Mr. Gingrich seemed to imply that America should bring back child labor.

“The GOP race just keeps getting more and more bizarre.

“I expected some nutty statements from Rick Santorum, but his recent attack on Obama for not sharing true ”biblical values” went beyond the scope of decency ; it was appalling. As they would say in the South – where we reserve the “t-word” for only the most serious of offenses – it was Tacky.

“It’s beneath the dignity of a presidential candidate to question the Christian faith of his opponent based merely on a difference in theology.

“If I sound harsh on a Republican – it’s only because I expect better from the party of Lincoln, Eisenhower and Goldwater. The nation as well as the GOP deserve better; the consequences of an intellectually stagnant and moribund Republican party are simply too awful.

“It’s pretty amazing that Rick Santorum claims the mantle of Christianity while advocating against medical care for the poor, and while having no problem with middle class Americans losing everything and being forced into bankruptcy because they happen to have the bad luck of experiencing a serious medical problem.

“According to Rick Santorum’s “biblical values” it’s ok to cut taxes on the wealthy while slashing health care for the poor. Jesus never said anything about the poor or the sick, did he?

“According to Rick Santorum’s “biblical values” we should oppose science-based health care education in favor of “abstinence only” education. However, as both the preponderance of scientific research and the experience of the socially conservative “Bible Belt” states show; Mr. Santorum’s policies would not only deny fact-based instruction, but would increase out-of-wedlock teenage pregnancies, would increase the abortion rate, increase poverty, increase “shotgun” marriages (and then increase the divorce rate), and increase the incidents of HIV, hepatitis C and other STD’s.

“We had 300 murders in my city last year – but Mr. Santorum see’s his Christian duty not to work to teach and promote non-violence but to oppose loving, peaceful American couples who simply want the same legal rights as other Americans.

“Ironically, by opposing gay marriage equality, Mr. Santorum opposes the one thing that would encourage greater monogamy in the glbt community, that would help reduce the incidence of Hepatitis C, HIV and other STD’s; that would promote stable, committed relationships (which is certainly a worthwhile goal of society whether one agrees with homosexuality or not), and which would provide greater stability for children being raised by a glbt couple. These are all good goals for society and government.

“It’s dangerous for any one party or politician to believe their values are those of God. Doing so suggest a dangerous arrogance and promotes an “us against them” mentality that divides Americans and pits one group of citizens against another. This is no way to lead a pluralistic society.

“The GOP can do better, and America requires better. I’ve been a conservative all my life, but would have no choice but to vote for President Obama if Rick Santorum is the GOP nominee. Privately, many Republicans tell me the same thing.

“For the rational wing of the Republican party” 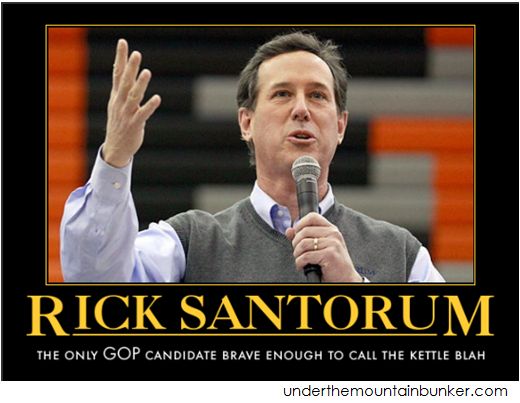