To Those in Wisconsin who Support SB 507 about Single Parents

I recently posted about Wisconsin State Bill 507 which will list single parents as a factor to child abuse and neglect. Then I came across this photo last night on the internet and thought that this would be a very good reminder to those supporting SB 507 – that President Obama and former President Clinton were both raised by single mothers. 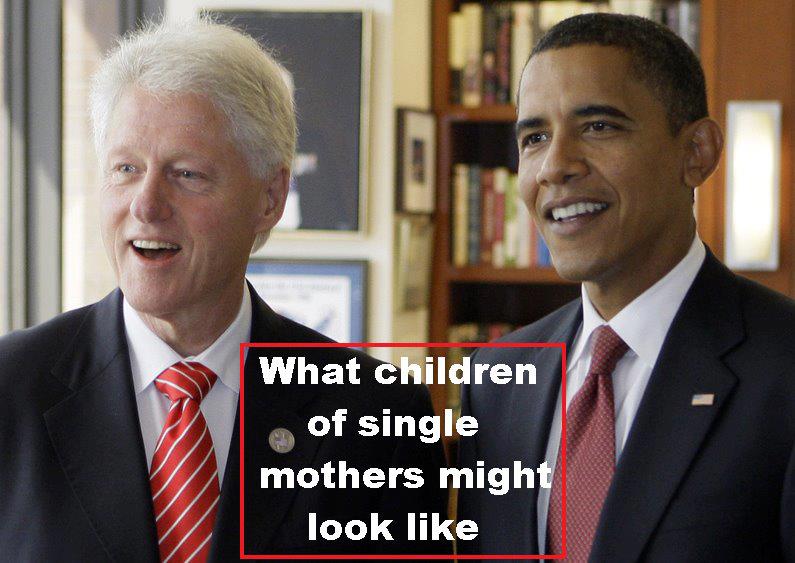 I also search on the internet for other presidents who were raised by single parents and there were five. And these are just presidents – I am sure there are thousands of others who have done very well in life and for the people who were raised in single-parent households.

Our very first president was raised by a single mother. George Washington was born to Augustine and Mary Ball Washington. George’s father died when he was eleven years old, and his mother raised him and even lived long enough to witness her son become the first President of the United States. Mary not only raised George but his four siblings, as well.

Another great American, Thomas Jefferson, lost his father when he was fourteen. His mother Jane Randolph Jefferson raised him. Jefferson got his love of books and learning from his father. Jefferson continued to study and excel in his studies and eventually attended the College of William and Mary for 2 years and then began concentrating on law. In 1768, he was elected to the Virginia House of Burgesses. In 1801, we went on to become the third President of the United States and was a primary author of the Declaration of Independence.

These next two Presidents’ fathers died before their sons were born. Andrew Jackson’s father died three weeks before he was born in a logging accident and was raised by his mother, Elizabeth “Betty” Hutchinson Jackson. Before he was elected the seventh President of the U.S. in 1829, he had been a U.S. Representative of Tennessee, a U.S. Senator, and a judge of the Tennessee Supreme Court from 1798 to 1804.

The forty-fourth President, Bill Clinton, also never knew his father. William Jefferson Blythe, Jr. died in a car accident on May 17, 1946, only a few months before the future President was born. In Clinton’s autobiography entitled “My Life” he says how his father inspired him to live a full life: “The knowledge that I, too, could die young drove me both to try to drain the most out of every moment of life and to get on with the next big challenge. Even when I wasn’t sure where I was going, I was always in a hurry (pg.7)”. Clinton made major accomplishments before becoming President.

He attended Oxford University and graduated from law school at Yale University in 1973. Shortly after graduating, he began teaching at the University of Arkansas Law School, Fayetteville. He was elected Attorney General of Arkansas in 1976 and in 1978 became governor of Arkansas.

And, of course, our current POTUS, Barrack Obama. President Barack Obama, was born to a Kenyan father, Barack Obama, Sr., and Ann Dunham from Wichita, Kansas. His mother and grandparents raised Obama after his parents divorced. Obama’s father left when he was only two years old and saw his son only one other time during a Christmas visit in 1971. Young Obama’s support system along with his own desire to succeed helped propel him to the top office in the country. Before becoming president he received a degree in political science from Columbia University in 1983. He was elected the first African-American editor of the Harvard Law Review and graduated magna cum laude from Harvard in 1991. He also taught at the University of Chicago Law School and served as Illinois Senator.

Who says a child raised by a single parent can’t be successful? These five men each had ambition and desired to do their best regardless of the circumstance. Examples like these show how children’s lives don’t have to be anything less than great just because their family doesn’t fit the American ideal.