The Swamp Cooler versus the Furnace

For those of you who live in a climate where swamp coolers are useless – be thankful. However, the desert southwest is not one of those areas. Born and raised in the midwest, I’d never heard of these beasts until I moved out here. The basic premise is water-cooled air by evaporation. Simple physics… air passes over water, water evaporates dropping the temperature of the air, and voila! The desert-version of A/C. When a home has a decent cooler, they’re not bad, especially when they function through the central air ducts. But some units just blast a wind tunnel of damp cool air out one duct right beneath it and sounds like a 747 landing in your house.

Luckily, I live in a house where both the cooler and furnace use central duct systems. However, they are completely separate units electrically. A thermostat runs the furnace, and two completely different switches (on/off and high/low) run the swamp cooler.

Today, Terry, the handy-man, came by the house to set up the swamp cooler. They’re actually very easy to do. Simple mechanics – but the one at my house is on the roof, and I’m not up for going up there nor is my roommate, Lyn. Plus, Terry is always needing some cash and will never take any unless he works for it. Good guy. Not the sharpest knife in the drawer, however…. which today he reaffirmed this little fact.

Terry kindly calls me when he’s done and asks if he wants me to leave the cooler on. Sure, why not. Sometimes they have an odor the first time they’re fired up. Plus best to make sure it’s working properly before the real heat of the summer sets in. Since I share a house, my two rooms (office and bedroom) face west with only one half-ass tree outside, and it’s a brick home. It gets pretty damn hot in my rooms, and I spoil my computer… I don’t like my baby overheating.

I arrive home, walk in, “Ahhhhhhh….” Nice cool air. I head to my rooms to boot up my system and to let my dogs out, as they are baby-gated to my section of the house (I live in a professional breeders home, so groups of dogs live in their own sections and are typically crated. My two are good kids, plus they’re rescues therefore fixed so they don’t mark the house like the stud dogs, so they are not crated). Then when I round the corner, BAM! I hit a wall of 100 degree heat! WTF!!! My two dogs are looking at me like this: 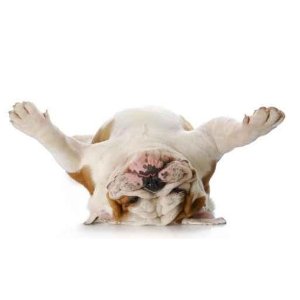 … panting and thinking, “Puhleeeeze, put me out of my misery!” And probably dreaming of this: 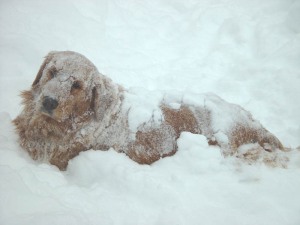 Terry, in all his infinite wisdom, forgot to turn off the furnace thermostat so a war was being waged between the swamp cooler and the furnace – and in my portion of the house, the furnace was winning.