Is Mitt Romney’s historical attitude a warning of what’s to come?

There have been many items within Mitt’s history that when combined together as one becomes a very frightening sense of foreshadowing of what is yet to be should he take office as POTUS. In review, first off, we all know the story of how Mitt and his family drove across country with his dog, Seamus, riding in a dog crate on top of their vehicle – for a 12-hour drive. Seamus ended up defecating in his crate so much that the feces ended up sliding down the rear window.

Whether Seamus relieved himself due to stress or because he was not walked properly and allowed time to relieve himself is unknown. However, either circumstance shows an inconsiderate “who cares” attitude from Mitt. Romney only cared about one thing, and that was getting to his destination. Selfish, uncaring, and self-centered.

Now recently in the news the story has emerged about how Mitt was a bully to another student at the private school, Cranbrook, that he attended as a youth. The story goes that another student had effeminate qualities which Mitt did not care for. A “fairy” as was the term back then. So, Romney and his friends tackled and pinned down the victim while Mitt cut off his long, blond hair.

Pure bully attitude. Another “who cares.” Romney had no sense of remorse and simply just did not care. More selfish behavior. Romney’s response when questioned about this incident is that he “does not remember.” This greatly concerns me. We have all picked on someone in our youth, some very minor, some more along the lines of Romney’s hair-cutting ordeal. Most people remember the meaner acts they did since those who have morals feel remorse later in life after they’ve matured when they have purposely hurt another person, especially when the victim was innocent and undeserving of the bully behavior.

Joe Klein, from TIME’s Swampland best responded to this:

I’m still waiting for the moment when Romney actually tells the truth about something difficult. He could have said, “You know, I’ve been troubled by the Cranbrook episode for most of my life, and I feel relieved, in a way, that it’s come out now. I did a really stupid and terrible thing. Teenage boys sometimes do such things and deserve to be punished for them. What I most regret is that I never apologized to John and won’t be able to now that he’s gone, but let me apologize to his family and friends. Bullying is unacceptable under any circumstances. It is especially unacceptable when prejudice — against one’s race, ethnicity or sexual orientation — is involved. If elected President, I will try to atone for my teenage behavior by campaigning against bullying all across this country. What I did back then should be an example of how not to behave. I hope we can all learn from this. I know I have.”

Next, enter in Bain Capital.

Here is the epitome of selfish, greedy and corrupt behavior which carries no concern for those who may be hurt during the push to profit.

Let’s follow a timeline of facts of the Bain Capital takeover of GST Steel in Kansas City.

Kansas City’s GST Steel was a successful company that had been making steel rods for 105 years when Mitt Romney and his partners took control in 1993. They cut corners and extracted profit from the business at every turn, placing it deeply in debt. When the company eventually declared bankruptcy, workers were denied their full pensions and health insurance, and the federal government was forced to step in and bail out the pension fund.

1993: Mitt Romney and his partners invest $8 million to acquire majority control of an Armco steel mill in Kansas City, Missouri, and rename it GS Technologies.

1995: Romney and his partners merge GS Technologies with a mill in South Carolina, calling the new company GS Industries. The company’s total debt grows to $378 million.

“In 1997, with Armco’s pension guarantees set to expire in one year, the United Steelworkers local at the Kansas City plant was worried that GS was not setting aside enough money to cover pension obligations and other benefits in the event of a shutdown.” Reuters, 1/6/12

“We were doing well and then Bain Capital bought us and they took everything they could out of the company without making the investments we needed to stay competitive. … They ran the company into bankruptcy.” — James Sanderson, who had worked at the mill since 1974 MCCLATCHY, 1/14/12

2001: With more than $500 million in debt, GS Industries files for bankruptcy and informs workers that the company will not honor the guarantees it had promised them — including severance pay, health insurance, life insurance and pension supplements.

“I worked hard all my life and played by the rules, and they allowed this to happen.” — Joe Soptic, employee for 28 years, whose wife died of lung cancer after he lost his GST health plan REUTERS, 1/6/12

2002: The U.S. Pension Benefit Guaranty Corporation determined that GST had underfunded its pension plan by $44 million. The federal agency stepped in to cover the basic pension payments, but workers never recovered the full pensions they had been promised.

Even with the bankruptcy and subsequent bailout, Mitt Romney and his partners made millions on the GST Steel deal. They played by their own set of rules, and profited even as workers lost their jobs and the local community suffered.

It’s this same experience that Mitt Romney now cites as his qualification to be president, and the same economic philosophy he would bring to the entire country.

Jobs Lost: 750
Bain Initial Investment: $8 million
Bain Profits: In excess of $12 million (not gross, but PROFITS AFTER the $8 million in purchase is recovered.

Again… Jobs lost: 750. No severance pay, health and life insurance lost, and pension lost – with some coverage by the government. Now, think about this… if it were all left in the hands of the corporations, then the employees would not have received one red cent. Thankfully the government stepped in and some pensions were gained – but all that they rightfully, and legitimately, put in by working an honest job was gone thanks to Mitt Romney and Bain Capital. 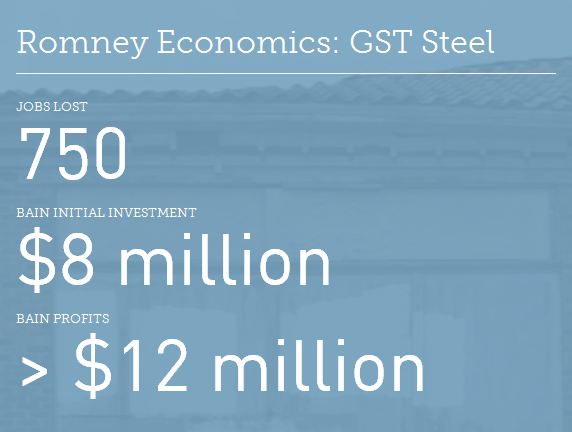 And then there is Dade Behring… a quick summation:

With Dade Behring, Mitt Romney and his investors took over a healthy company and loaded it with debt. Rather than sell the company, they then had Dade take out even more loans to buy out their shares, driving the company into bankruptcy. Nearly 3,000 workers lost their jobs, while Romney and his partners made more than $250 million in profit.

“Bain and a small group of investors bought Dade in 1994 with mostly borrowed money, limiting their risk. They extracted cash from the company at almost every turn—paying themselves nearly $100 million in fees, first for buying the company and then for helping to run it.”  NEW YORK TIMES, 11/13/11

1999:  Dade takes on $420 million in new debt to pay Romney and the other owners. Romney and his investors take home $242 million from the payout, a 700% return on their initial investment. 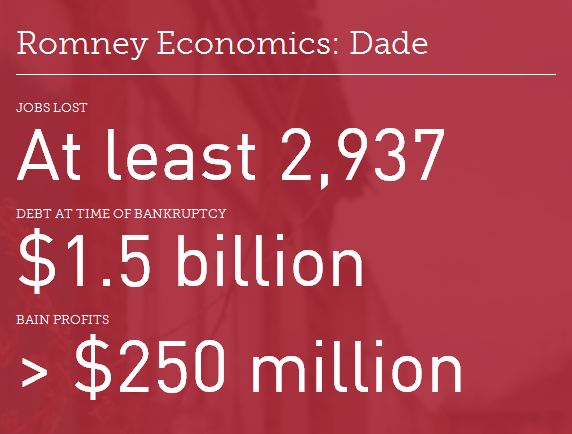 One more, for the record…. Stage Stores: Profit at any cost

In the late 1980s, Mitt Romney and his partners bought up hundreds of successful small clothing stores and combined them to form Stage Stores. Romney and his team loaded up the company with debt, and then, when the company was at its height, sold nearly all their shares at an enormous profit. In less than three years, the stock had collapsed and Stage was forced to declare bankruptcy. 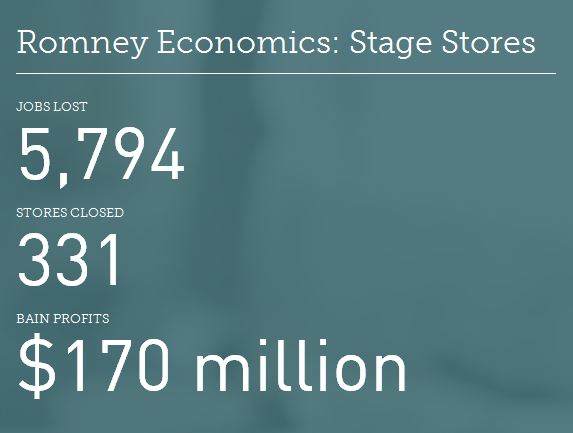 Mitt Romney wasn’t trying to build companies for the long term. His plan was to maximize short-term profits, and then resell all or part of the business before the debts came due.

The money that Mitt Romney is now hiding in the Cayman Islands and in Switzerland is blood money from all those who lost their jobs under the rule of Bain Capital.

Seamus…. who cares about the dog crapping on the car and stuck in the crate for 12 hours

Cranbrook…. who cares about the feelings of another student because he displayed homosexual traits

Bain Capital…. who cares about the employees. Let’s tear apart the company, pull all the profits we can, and bankruptsy it out.

Detroit auto companies…. who cares. Now he’s trying to take credit for the resurgence in Detroit. He would not have set up a plan to come back. He would have “let it run it’s course.”

Who cares…. If Seamus had been the only incident, it wouldn’t be quite so bad. Stupid, but not quite so bad. Likewise, had Cranbrook been the only incident, yeah kids will be kids. But in wrapping them up all in one package, this is not the type of character or personality I want in charge of our country. Is this the type of man you want to be President of the United States? He has absolutely no remorse. Takes no responsibility for hurting others. Mitt Romney just takes the money and run. Now, in all fairness, Bain Capital does have it’s success stories. However, these “failures,” combined with an attitude of no remorse, show a side of a man which should not be in charge of running this country. Mitt Romney will turn the United States of America into the United States of America, Inc.