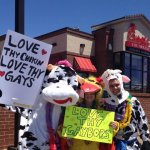 Recently, the current COO of Chick-fil-A, Dan Cathy, has declared publicly that he is opposed to same-sex marriages. On July 16, Cathy appeared in The Baptist Press:

Since then, a flood of reactions have occurred both supporting and opposing Dan Cathy and his restaurant, Chick-fil-A. Included are: Jim Henson Company pulling their toys from the restaurant; Former GOP presidential candidates Mike Huckabee and Rick Santorum declaring today, August 1st, as “Chick-fil-A Appreciation Day”; and the Mayors of both Boston and Chicago openly stating the Chick-fil-A is not welcome in their cities.

Chick-fil-A has grown into a multi-billion dollar chain with 1,614 restaurants as of April, 2012. The Cathy family has deep roots in the Southern Baptist Church and have both founded and donated to several organizations of which are clearly anti-gay. In fact, the Atlanta-based fast food chicken restaurant that specializes in Christianity, has used its more than 1600 outlets to fuel its zest for stopping same-sex marriage, spending $5 million between 2003 and 2010 on anti-gay organizations and hate groups, including $2 million in 2010 alone.

The WinShape Foundation is Chick-fil-A’s charitable arm, created by Chick-fil-A founder and chairman S. Truett Cathy in 1984. In 2010, WinShape donated $1,974,380 to a number of anti-gay groups:

In fact, Family Research Council’s president, Tony Perkins openly stated that, “They [homosexuals] are intolerant. They are hateful. They are vile. They are spiteful…pawns of the enemy.” You will hear him declare this at 0:43, as well as “many gays have an ’emptiness within them'” (:55) because they are “operating outside of nature” (1:09):

With all this information surfacing recently, there is one thing I will state for certain – I will never give one more cent to Chick-fil-A. Oh, sure, I enjoy their waffle fries which most fast-food restaurants do not have. But I can definitely live without them. It absolutely repulses me to know that my previous purchases have gone towards various hate-groups from Chick-fil-A. Well, no more. Will the Cathy’s miss my money? Of course not. But at least I have a clean conscience that I am no longer contributing towards ignorance and hatred. This is 2012 – I would have thought by now that, as a society, we would have advanced much further than we currently have. Of course, bigotry and racism will never be wiped out, but the volume that is still present is frightening.

To close this out, I would like to share some of the comments, both for and against Chick-fil-A, which have been left on the Facebook page, “Chick-fil-A Appreciation Day“. Since this is a public event, I am leaving the names intact:

David Gordon Went by our local Chick-fil-a and bought our lunch for today. enjoyed it. Thanks to Mr. Cathy for standing up and being counted for the right. From what i saw here, there are a lot more people that agree with his viewpoint than i thought. Lines were long in all directions.

Karen Witt Hubbard Hey Ashley just wanted you know I’m sitting in line at Chick-Fil-A 1/2 mile away from the drive through. You have inspired me & so many others. Rock on! God is sooooo Good! [Note: Karen changed her profile picture to the Chick-fil-A logo]

Josh Howatt I can only imagine the kind of progress that could have been realized today, had these thousands of people who spent hours waiting in line donated the cost of their lunch to something that truly demonstrates Biblical, CHRIST-like principles such as taking care of the homeless, food-less, family-less, those living in poverty stricken countries, or helping to advance cures for those suffering from terminal illnesses. That would have truly been a miracle. And THAT would have truly made God proud. Not this.

AdAm Santo fuck you Huckabee, your promoting hate and bigotry while embracing those who seek to deny equality to all.

Sarah Palin… somehow this does not surprise me