The Two Main Reasons You Should NOT Vote for Mitt Romney

Naturally, in being a liberal Democrat, I can think of dozens – if not hundreds – of reasons why Romney should not be president, and I’m sure Republicans feel the same way about Obama. However, there are two items about Romney which are key elements and shows the type of man that Mitt is – which is definitely NOT POTUS-material. There is nothing that Obama has done which can hold a candle to Romney’s deceptive nature. If you have been keeping up with the news on Romney, I’m sure you can guess at least one of the two.

Before I go any further with detailing out Romney, we should first look at what traits, morals and ethics should accompany the highest office in the United States. Of course, no one completely agrees with everything any President has done, prior or current, therefore I will be generalizing my points.

Naturally just to name a few positive ethics, we have honesty, empathy, compassion, and open-mindedness. All are excellent traits to have regardless if you flip burgers at a fast food restaurant; fly a Blue Angel; or are President of the United States. These features are desirable to have and are respected by all. Additionally, we must not forget about transparency. Transparency of the Chief Executive is also critical in maintaining a trustworthy relationship with the majority of the citizens of the US.

The President of the United States has always been an excellent role model, especially for our youth. How many children have said that when they grow up, they want to be President. And simply because they’re young, it is normal for most children to idolize the current President in office. I’ll get back to this point in a moment…. 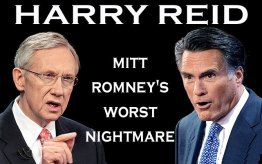 Then there is Mitt Romney…. Romney has been asked to provide his tax returns for months now, and he is flat out refusing to do so. His staff did provide some lame excuse of a partial tax return, but definitely not the full paperwork. Senate Majority Leader Harry Reid (D-Nev.) claims that a former Bain Capital employee told Reid that Romney has not paid taxes in over ten years.

What is he hiding? Is this the type of person you want our children to believe in and follow as a role model? Our country completely functions on taxes of all kinds. Without taxes we would not have roads, police officers, teachers, bridges, government employees, animal control, and the list goes on and on. Therefore any person that runs for President of the United States of America should show that they are an excellent role model for paying their PROPER share of taxes, without loophole after loophole that are weak at their best – or perhaps not even filing taxes! I can just hear a child in their early teens now… “Mom… why do you have to pay taxes when the President doesn’t pay his? If he doesn’t, then you shouldn’t have to either. Now, can I get some new clothes for school this year since you won’t be sending what’s left in our account to the IRS?”

Romney’s overseas accounts tie in to this as well. The primary purpose – hell, the only reason for stashing money away in the Caymen’s, in Switzerland, or a few other places which keep your accounts completely private, are so that you do not have to pay taxes on these large amounts of money. Tax free!

Now, seriously… is this the type of person which should hold our number one position of this country? One that hides his tax returns so that the people do not find out what he has done – or hasn’t done. Then to top it off, he invests money elsewhere. No, overseas accounts are not illegal. But how can every citizen of this country rightly pay their own taxes when our own president does not pay his own share? I would definitely think about it with a solid defense that “President Romney” gets away with faulty tax returns, so can’t I? Mitt Romney’s own father, George Romney, once stated:

“Any politician who will not show multiple year taxes may be hiding something.”

Romney is a devious and very deceptive man. In 1994, Mitt demanded that Ted Kennedy needed to disclose his taxes to prove he has nothing to hide. Romney completely believes that this doe not pertain to him – that he is exempt. Romney will do anything he wants in order to get what he wants. And that may very well be the entire middle class of this country. He cares naught about the citizens and his repetitive repertoire of canned responses, but no actual answers, is becoming horribly boring.

Lastly, I am actually rather shocked that it is not a requirement for anyone running for President of the United States to disclose x-number of years of tax returns. Think about this… YOU have to show MORE tax documents when buying a house, or signing a car loan, than you do when running for President.

Something just is not right with that. 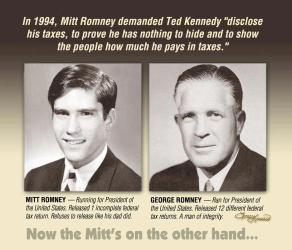 Please, I beg you… do not vote for Romney. This does not mean you have to vote for Obama – there are dozens more out there how are running for Executive Office. Gary Johnson, former governor of New Mexico, is running as a Libertarian. Hey, he is pro-marijuana, so for those who like a blunt now and then, he’s your man!

There are too many to list. But you may CLICK HERE to view all the people running for President. There are parties listed such as the Reform Party USA, the Socialist Party USA, the Justice Party, the Green Party – which I have heard some very wonderful things about Dr Jill Stein (MA), and many more.

Then there are the “write-ins.” Some of these people are a hoot! I bet they’d liven up the office as President. There is “Mad Mike” Hughes (Independent California), “Average Joe” Schriner (Independent Ohio), and Robert “Naked Cowboy” Burck (Independent-New York) – sorry, no website available for the “naked cowboy.”

Lastly, voting for any one of these off-shoot parties is NOT a waste of a vote. What is a waste is the deterioration of American lives, homes, jobs, and families is if you vote for Mitt Romney.