“Legitimate rape.” Every since Senate-hopeful Tod Akin (R-MO) said those infamous words, the media and people all over have blown up. When Akin claimed that women’s body “shut down during rape,” he mentioned that this information was from doctors. That had me wondering from that very moment… either Akin’s was flat out lying, or there is some quack out there. Come to find out that it’s neither.

Rep. Akin’s source of information about the rarity of pregnancy resulting from rape, is two pages in length, from Fred Mecklenburg’s 1972 book chapter, “The Indications for Induced Abortion: A Physician’s Perspective,” which came out of his book Abortion and Social Justice. These two pages have influenced two generations of anti-abortion activists hoping to build a medical case to ban all abortions without exception.

Mecklenburg cites a few reasons why women do not impregnate during rape, but the one that Akin seemed to focus on was Mecklenburg’s statement that a woman “will not ovulate even if she is ‘scheduled’ to [during rape].” This conclusion originated from experiments conducted in Nazi death camps.

That’s right. Nazi death camps. Akin’s ignored decades of studies, much more advanced in technology, education, and research, and chose to base his conclusion on a hypothesis which resulted from German Nazis torturing Jewish women in their death camps.

The Nazis tested this hypothesis “by selecting women who were about to ovulate and sending them to the gas chambers, only to bring them back after their emotional torture peaked as they thought they were going to their death. The Nazis studied what the effect was on their ovulatory patterns. An extremely high percentage of these women did not ovulate.”

There are many factors which would have attributed to the women in the camps not ovulating, but Mecklenburg chose to ignore them so his conclusion would appear more sound. Being malnourished, overworked, and living in terror not knowing that you may be tortured and/or killed at any moment are only a few. Regardless, any study must mirror the conditions of the target result – in this case, women living every day normal lives. Rape is an act of violence which can happen unexpectedly anywhere at any time.

When Does Life Begin? 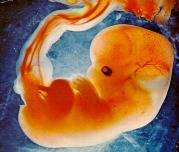 When life begins can never be a “proven” fact, and varies greatly throughout the world depending upon the culture. Is it the exact moment of conception? Is it when the lungs develop? Is it at the point where the child can live on it’s own outside the womb (without a million dollars of equipment keeping the fetus alive when it should be dead)? Or is it when the fetus is actually born? There is no “magic answer.” No neon sign will drop from the heavens and give us an answer. Doctors and scientists cannot conclude when life begins. If they cannot, with all the years of studying and research, then how can our politicians determine when life begins?

Contrary to today’s anti-choice activists, however, Mecklenburg was a strong supporter of Planned Parenthood and urged the anti-abortion movement not to object to family planning. At least he could see and realize what Planned Parenthood was and still is actually about and the good it provides women all over the country. Why can Akins and the RNP as a whole not live by this belief from Mecklenburg? Pick and choose. Pick and choose what is beneficial to serve one’s purpose.

Interesting enough, Mecklenburg’s book was edited by a doctor and a lawyer, and funded by Americans United for Life – the major legal arm of the anti-abortion movement. Additionally, Mecklenburg’s wife, Marjory, was an early opponent of abortion rights and was a chairwoman of the National Right to Life Committee. Personal beliefs skewing the Mecklenburg’s interpretations of the results of the Nazi studies thus allowing them to conveniently arrive at a conclusion which supports the Mecklenburg’s fight against abortion.

To the contrary of Akin’s and Mecklenburg’s belief that women do hot get pregnant from being raped is the recent study and release by the American Journal of Obstetrics & Gynecology. This study states:

“…among adult women an estimated 32,101 pregnancies result from rape each year.”

Clearly this was a matter of picking and choosing. Just like how the extreme Christian Right choose what they wish to use from the bible in order to demand that laws restricting women’s reproductive rights are limited and/or taken away from women. Same thing when it comes to gay marriage. Choice by convenience.

Rep. Todd Akin has since apologized. “What I said was ill-conceived, and it was wrong,” Akin said on former Arkansas Gov. Mike Huckabee’s radio show Monday. “I really just want to apologize to those that I’ve hurt.”

Sometimes apologies just do not matter. In this case, I firmly believe that Akins apologized purely due to pressure from the Republican Party – not because he felt he was wrong.

This just goes to show how horribly our Republican Party has changed. The party’s values and self-worth are now being heavily questioned – even by lifelong members of their own party. And now, topping off all the controversy is a statement which originated from tortured women in Nazi camps.