Just like the first night of the convention, some incredible people with wonderful, uplifting and inspirational speeches. The speakers came to an end with Former President Bill Clinton giving the last speech – and what a speech it was! He firmly committed his support for President Barack Obama. Additionally, he went through all the Republican Obama-lies one-by-one, dissecting and tearing each lie apart.

One battle that Clinton as well as many other speakers brought up was the fact that two years ago, Mitch McConnell spoke the infamous words that their primary goal was to make sure Obama is a one-term president. This has been a double-edged sword… for one, the Republican Party has fought everything Obama has tried to do; and the other side of the sword was that the Republican Party clearly showed how they did not care about the people of this country. That their hate for Obama overwhelmed anything and everything they did. Our country was not their concern – only getting Obama out of office. Clinton stated:

“…the Senate Republican leader, in a remarkable moment of candor, said two years before the election, their number one priority was not to put America back to work, but to put President Obama out of work.”

“Though I often disagree with Republicans, I never learned to hate them the way the far right that now controls their party seems to hate President Obama and the Democrats.”

As I am sure you know, when Clinton left office there was a budget surplus in the trillions. Bill Clinton knew what he was doing when it came to the budget.

“People ask me all the time how we delivered four surplus budgets. What new ideas did we bring? I always give a one-word answer: arithmetic.”

“…the Romney plan fails the first test of fiscal responsibility: The numbers don’t add up.”

Here is the video of Clinton’s speech should you like to watch it:

Former President Clinton ended by officially nominating Barack Obama to run for President of the United States. Every one in the audience second that motion.

Prior to Clinton speaking was Elizabeth Warren. Elizabeth Warren is the Massachusetts Senate candidate. She had a lot of wonderful, yet brutally truthful things to say. You can read her entire transcript here. The one admittance that really stands out was how she admitted that the system is rigged:

“People feel like the system is rigged against them. And here’s the painful part: they’re right. The system is rigged. Look around. Oil companies guzzle down billions in subsidies. Billionaires pay lower tax rates than their secretaries. Wall Street CEOs—the same ones who wrecked our economy and destroyed millions of jobs—still strut around Congress, no shame, demanding favors, and acting like we should thank them.”

Here is the video with the portion of her speech about the system being rigged:

“The Republican vision is clear: “‘I’ve got mine, the rest of you are on your own.'”

Elizabeth’s brutal honesty was actually such a relief to hear. Many of us see what it going on, yet it is very difficult – if not next to impossible – to reach out to our delegates, candidates, senators, representative, and so on, to inform them of how we feel, what we see, and to please help stop the hate so we can move forward as a country.

Although Sandra did not speak for very long, she had some very powerful things to say. She spoke of a country that “could be,” where men make the decisions on women’s reproductive issues; they redefine rape, and many others. Sandra also eluded about Rush Limbaugh’s asinine verbal abuse towards her – and that we now have a president that when he found out about Rush Limbaugh said, he thought immediately of his daughters. Not of his delegates, his donor, or any other such group of people. Sandra Fluke made it very clear that if Romney and Ryan were to be elected, it would radically change the lives for women in our country where we actually will go back in time. No equal pay, no Planned Parenthood, no abortions, redefining rape, and so on. Here is the video of her speech. It is not very long and worth watching:

Once again, it was a night of inspiration and hope. Comradery was even stronger than last night. Many of the speakers firmly stated that they want to work together with the Republican Party to come to a decision. And this is what our country needs. Opposing views often bring light upon something which was not seen by either party. An all Democrat or an all Republican government is sure to fail.

Clinton wrapped up the night with:

“I love our country – and I know we’re coming back. For more than 200 years, through every crisis, we’ve always come out stronger than we went in. And we will again as long as we do it together. We champion the cause for which our founders pledged their lives, their fortunes, their sacred honor – to form a more perfect union.” 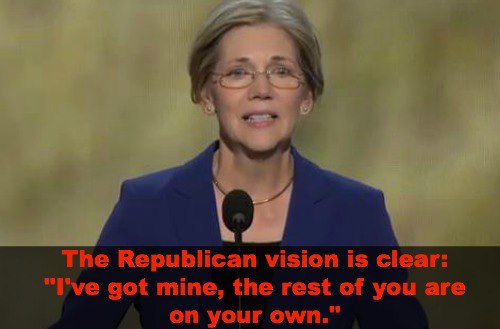