I was planning on working on one of my sites today, but never got around to it because I was checking out some awesome programs and apps I found on the internet. It all started out when I was checking the “Clicks” on my stat page. I watch all stats like a hawk and I want, and like, to know what links or images people are clicking on.

You may have already heard and used this online program I found, but it’s new to me and good enough to share. What that gophoto link took me to is an online program that is phenomenal!!! But let me back up just a bit.

Gophoto is an online viewing and editing program… well, it takes you to one. The actual gophoto site really is primarily a viewing app – but you can search for “like” images in google. I installed the extension on my browser. Okay, nice. Nothing to do the “happy dance” for. So I clicked on one of my own images on Motley News, it pops up in the gophoto window and there are some editing options. Okay, what the hell. Let’s try this out.

And where it took me was to a site that most people, non-professional photographers especially, need to know about. It is called Pixlr and is great! There are different “levels” one can use and it took me directly to a moderate level called “Pixlr express” and has many photo editing options. I tried out each and every one of them, and love it! This is actually much easier than using Photoshop when all I’m doing is some basic editing like getting rid of “noise”; sharpening an image; applying a vignette; changing the look to sepia; adding text; and many more. You can use images that are online, and you can also upload your own and edit them. The one down side to this site is that you cannot save a project. You have to finish it before you can close that browser tab.

Of course I played. Here are some “before and afters” that I cleaned. I found these on a Russian website (don’t ask, I don’t remember how I got to it) and the images had Russian captions on them. Couldn’t begin to tell you what they said. But I got rid of them and added some funny captions of my own to them. And yes, the girls are all dressed in condoms….

This is also the same program that Photobucket uses in their editing mode.

Now it’s time to explore this a bit more…. I clicked on the Pixlr logo and wham! I go to their website home page. Cool! Let’s check this puppy out! What’s that?? And “advanced” level?? I’m all over it.

What I found was a program that is mirrored after Photoshop and has quite a bit of the same features. Enough to do some real editing and photo manipulation. It has layering and masking capabilities, which is crucial to any creativity in Photoshop. I was – and I still am – very impressed. And this is FREE! I’m still in amazement… a free Photoshop-like program.

Naturally, I played for a while. Here is an example of layering and masking. I have a photo of the Sandia Mountains with the moon rising over them. Then I added a photo of a seagull flying that I took in the San Juan Islands. I masked out the water and everything else except the bird. In this example, though, the masking is NOT complete. I am simply showing that it masks just like Photoshop. Now, if you are a knowledgeable Photoshop user, the way you layer and reveal in Pixlr express is very different – and honestly, I don’t care for it. For example, when I turned on the masking layer, the image with the bird disappeared. I had to guestimate where it was and started hitting it with the brush to reveal it. I revealed more than I need so need to hide a bit. In this program the eraser is how you hide – not by using black and white in Photoshop. I fumbled around a bit until I figured this out. 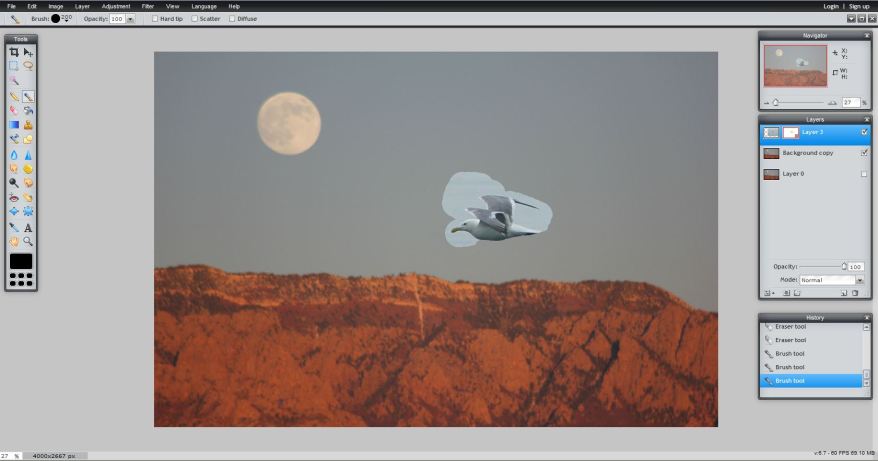 It is also a bit buggy. I use the keyboard commands a LOT, and the developer of Pixlr was smart and used the same keyboard commands as Photoshop (for the most part – I found one that was different). They were working fine… at first. Not sure what happened, but the keyboard commands quit working, shockwave crashed and I lost that image. Now, keep in mind, I have had this up and running for over six hours now, and this was my only crash. It happens – but losing the work does suck.

I found this program to be a wonderful replacement for Photoshop and GIMP which is another free open-source image editing software. I used it for months before I could finally afford my Adobe Production Suite that has Photoshop in it. Since I have Photoshop, I will not use this advanced level of Pixlr. I don’t need to. But if you don’t have Photoshop and can’t afford it, then I highly recommend this program.

What I will be using is the simple editing level. It’s so fast and easy. Often times, I don’t want to play with all the adjustments of an effect. Perfect example is a vingette. In Photoshop there are many different ways to create a vignette, but there is no actual “vignette” filter to use. So it typically take many steps. But the Pixlr editor makes the vignette a piece of cake.

For simple, quick and easy photo editing, Pixlr express is great! There is another version called Pixlr-o-matic (playful), but I have not tried that one yet.

That was my day of discovery. Well, I actually found a lot more cool stuff on the internet, but this post is long enough the way it is, so I will just stop here.

Give it a try and play. That’s how I have learned many programs that I am now very proficient in. Play. Here is an example of Pixlr express – another before and after. The original graphic was made by Mario Piperni. He is gifted in photo editing, restoring, and creating. Hope he doesn’t mind. My modified photo is not going anywhere but here for an example. It’s ugly anyway – just wanted to show what the express can do. I changed the color, pushed in Ryan’s cheeks, “bloated” his hair, made his nose look fat, added a grunge border and applied a fabric filter to it so it looks like it was created on some sort of material. Oh, and put old lady glasses on Mitt. And this is just scratching the edge of Pixlr express. I seriously love it! The last image is a screen shot from the Pixlr express showing all the options available to use. 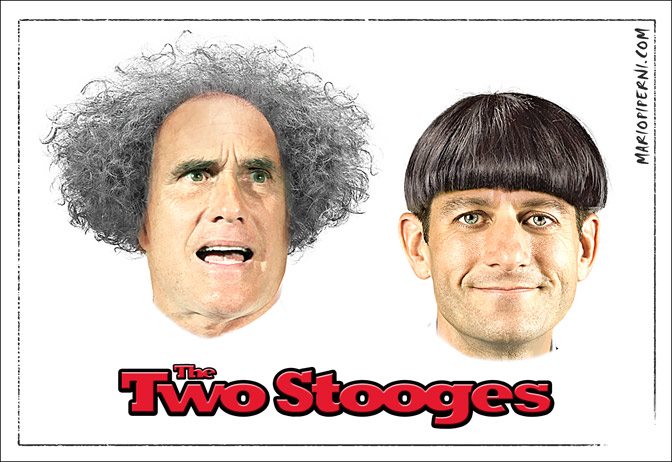 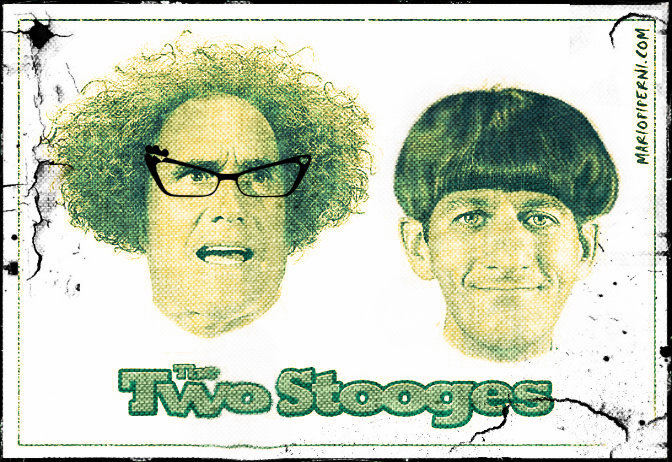