Numerology: The branch of knowledge that deals with the occult significance of numbers.

Today is 12-12-12, the last major numerical date using the Gregorian or Christian calendar for almost another century. The next time three numbers will align as they did on 9-9-09, 10-10-10 and 11-11-11 will be on Jan. 1, 3001, or 1-1-1. Several numerologists believe that today has special powers, some even believe it is the end of the world. In fact, here is one site which has determined that Mt Shasta in California is the “portal of ascension today.”

Unfortunately, if numerologists really understood the science of numbers, then they would know and understand that NO dates and NO numbers have any magical powers. Why? Because the numeric system we currently happen to be using as a whole is a base 10 which we call the decimal system. Why do we use this system? The answer is so simple that many people cannot believe it, but we use the base 10 system because that is how many digits we have on our hands. Seriously? As a heartbeat. Early mankind needed some way to count, so what was convenient and always available? You got it. Hands. Of course, many people cannot accept this as an answer and have created enormous explanations why we use Base 10.

This is not to say that there were not other numeric system generated, as there most definitely WERE. The Aztecs, for example, used a base 20 (vigesimal) numeric system. I guess they used their toes, too (kidding… maybe). But this is a whole other topic so I will leave it at that.

What is base system? To better explain, I’ll use base 10 since we all know this one. I’m also explaining in a non-mathematical way and adding visual. I find this an easier way to explain. But Ken Ward’s Mathematics Pages (website) provides the mathematical explanation if that suits you better. 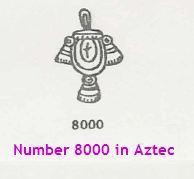 First of all, redirect your understanding of written numbers to see them as a squiggle to represent quantity. For example, the Aztecs used more of a pictorial numeric system. Next, imagine filling up columns with numbers. They all start with 0. The first column we fill is the far right with 0 to 9. Then we’re out of numbers, so we put a 1 in the next column to the left. Start over on the right with 0 to 9. Then when done we change the 1 to a 2 in the second column. And so on. When the second column hits 9, and the first column hits 9, we’ve maxed out, so have to add a third column (we’re now at 100). So we start all over again with 0 through 9’s until each column maxes out.

Now, let’s try a base 8 system. Throw away the symbols “8” and “9”. We start with the same set of columns all starting with 0. But we can only go as high as the number 7. The first column to the right goes from 0 to 7, now we’re out of numbers. So we put a 1 in the next column to the left and start over with 0 to 7 if the right column.

Catching on? A base system can be whatever you want it to be. In keeping this from turning into a Numerology Thesis, just take a look at this image showing how to count in a few example base systems. 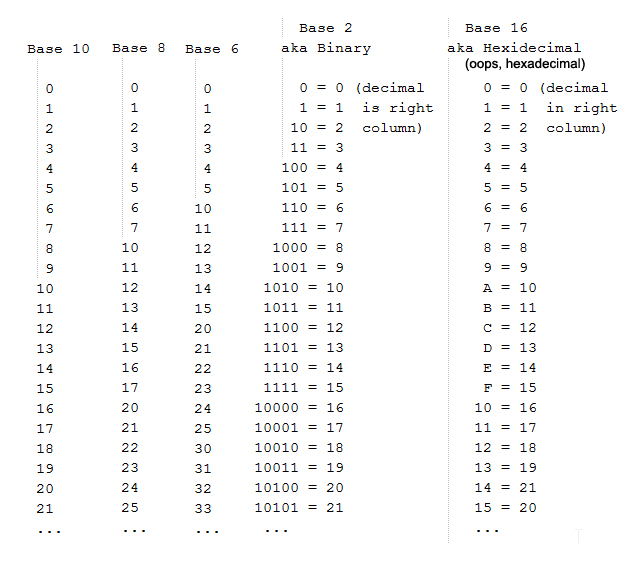 For the simple reason of the number of digits on our hands, then the base 10 system stuck. But you can change today’s date to any base system and it will no longer be the same number as today. However, with smaller base systems, then there are many more times that the date is the same for month, day, and year since we have to cycle and start a new column sooner than the base 10. Now if you use a LARGE base system, for example the Hex base (16 base), then the places from 0 to “15” all need to be unique. So A, B, C, D, E, and F needed to be used rather than 10, 11, 12, 13, 14 and 15. So, matching dates would be fewer and farther apart than now.

Quick side note…. Why a hex base? Computers. Google if you want more details, but computers work off of both a hexadecimal system as well as binary (digital is binary, either “on” or “off”).

Here are examples of what today’s date would be in the different bases: 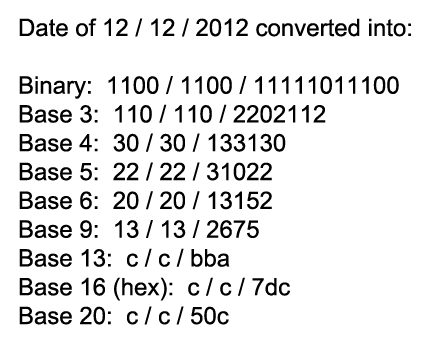 Get it? It’s one of those things that either makes no sense whatsoever or it makes complete sense. When learning for the first time, don’t be surprised to think, “huh???” But when the light bulb appears above your head, it’s almost like an epiphany. Understanding different base systems opens up the world of math, physics, and the universe. I hope you have been enlightened now if this is a new concept to you. There is nothing magical about today at all. Sorry if this deflated your balloon of mysterious events…. And I wonder how the folks are doing up on Mt Shasta…. ?

FYI, another side note…. Technically, today’s date is 12/12/2012, so not all 3 places match anyway, and haven’t since the first 12 years after we changed into our Gregorian calendar year. But hey, that’s splitting hairs, right? If the numbers don’t fit your needs, then just change the presentation. In other words, bend the rules and make it work, right? Sorry, hate to tell you this but the laws of science will always prevail over mankind and it’s folly.

Leave a Reply to The Hobbler Cancel reply