On Saturday, December 15th, with the murdered children and adults not even gone 24 hours, Shirley Phelps-Roger sent out a tweet that their Westboro Baptist Church would picket in front of Sandy Hook Elementary School in Newtown CT. This church is known for it’s extreme beliefs combined with pure hatred. Their members frequently picket at funerals of our military soldiers who died or was killed overseas.

Westboro will picket Sandy Hook Elementary School to sing praise to God for the glory of his work in executing his judgment.

A news site states that a blog post from the church praised the actions of the shooter and said that the deaths of children compared to adults was a “good ratio”; 26 people died in the shooting, 20 have been confirmed to be children aged 6 and 7. I have been attempting to pull up this blog post to confirm, but it just will not load. I’ve been waiting over twenty minutes now and it still hasn’t loaded, so this specific part of the WBC “God Hates Fags” website must have an enormous amount of traffic. On the Home page, however, I did find an excerpt which states:

“God sent the shooter to Newtown, CT. ‘Shall there be evil in a city, and the Lord hath not done it?’ Amos 3:6. He is punishing you for your sins against Him (e.g., fag marriage).”

Well, Karma can be a bitch and she flew in on the wings of an angel today as Anonymous hacked into Westboro Baptist Church’s computer system. YES!! Anonymous deserves a virtual standing ovation. The data dump included the names, phone numbers, e-mail addresses, and physical addresses of dozens of alleged members of the religious organization. The hackers group did not indicate where or how it acquired the data. Ohhhh… this is SO just. So just.

In Anonymous’ own words (video below):

FYI… you may wish to turn your speakers down for the last 20 seconds (I didn’t know to do so and about jumped out of my skin).  Here is another quote. Anonymous tells the church that it will…

“…progressively dismantle your institution of deceitful pretext and extreme bias, and cease when your zealotry runs dry.”

Additionally, a petition was started at the petition page of the Whitehouse.gov website which states:

Legally recognize Westboro Baptist Church as a hate group.
This group has been recognized as a hate group by organizations, such as The Southern Poverty Law Center, and has repeatedly displayed the actions typical of hate groups.

Their actions have been directed at many groups, including homosexuals, military, Jewish people and even other Christians. They pose a threat to the welfare and treatment of others and will not improve without some form of imposed regulation. Created: Dec 14, 2012

Prior to today, I have never given this church one fraction of a second of my time. I treat them the same way I do Rush Limbaugh and that is to totally ignore them. They’re only looking for attention, and I will not give it to them. To this cult, lack of attention is a thousand times worse than hate mail. I broke my rule today only because I always include sources as well as check out information for myself. I have to say, however, that I find their site to be sickeningly humorous, which is NOT their intent. There is so much hatred on their site that I find it hard to believe that these WBC members are human. First of all, the website is “God Hates Fags.” Really? Does he? Did the members have a Board of Directors meeting and not invite me? How gauche.

The WBC also lists their sister sites. I will not link them here as I do wish to keep links to them to a minimum, but the site’s names are:

Those are views I expect to see from this church. What I found more interesting were the statistical numbers they provide:

Now, drum roll please! I have to admit, I do like this last number they have posted:

0 – nanoseconds of sleep that WBC members lose over your opinions and feeeeellllliiiiiings.

Exactly why not giving them attention bothers them significantly more than hate mail. They probably fornicate over their hate mail.

Well, there ya go. This was definitely worth breaking my own rule just so I could post that Anonymous bent the Westboro Baptist Church members over and….

I’m sure that has happened more than once. 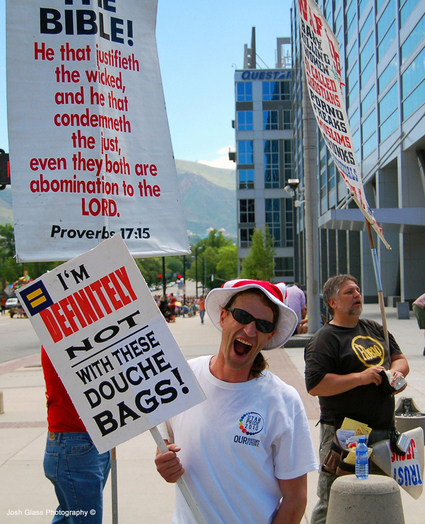 No, actually they were taught “hate” not religion. 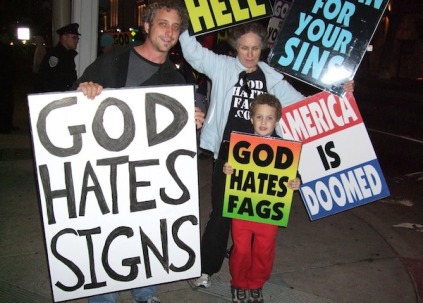 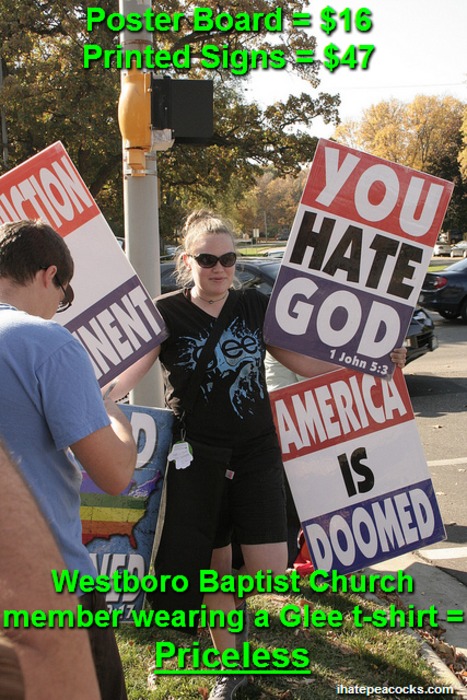 OMG! This is GREAT! Think… Glee has gay characters

Obama the Anti-Christ. Whatever… But he has silky legs.

Not too busy, though