This was a tweet from Bethany Danielle that came out over the twitter waves in regards to the five-year old boy being held hostage in a bunker in Alabama. 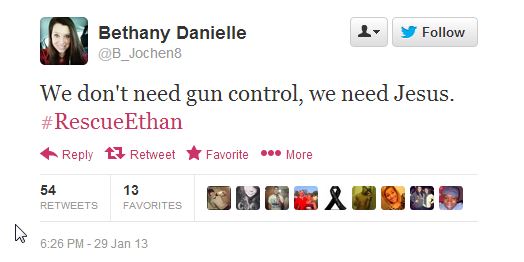 A very brief recap as I’m sure most have heard the news by now as this situation started just Tuesday afternoon. 65-year-old Jimmy Lee Dykes in Midland City, Alabama boarded a school bus with a shotgun, told the driver, Charles Albert Poland Jr., 66, that he wanted the children. As Poland tried to stop him, Dykes shot him dead. Twenty-one of the twenty-two children got away, but not Ethan.

Now Ethan is being held hostage in a bunker outside of Dykes home. Naturally SWAT teams and other professional are on the scene trying to sort out the situation and get the boy back. Dykes did recently allow the child’s medication to be lowered down via a PVC piping used for air.

So that would indicate Dykes does not want to kill the boy, but his motives are not known at this time.

Mickey Welsh/AP – Heavily armed officers near the suspect’s home at the scene of a Dale County hostage crisis in Midland City, Ala., on Jan. 30.

Naturally with this pro- vs. anti-gun war which has blown sky-high, this news has captured a different type of attention then it would have in years prior. As most people essentially have good will towards others, and it’s human nature to want to help others, there would have been an overall feel of people pulling together in spiritual support for Ethan and his family. Times of extraordinary crisis like this, or Hurricane Sandy, or the Joplin MO tornado, pull people out of their hurried little worlds and give us all a little reality check at just how fragile life really is. Not necessarily life as in life versus death, but our lives, our homes, our families, our pets…. In the blink of an eye, one or all can disappear right in front of us.

This time feels different. A malovence has spread causing one of the most selfish battles I have ever witnessed – and that is the war on gun ownership and gun control.

I can only imagine what little “Ethan” would say if he could understand all that is going on. “Please shut the hell up about whether or not you have a ‘right’ to own an assault rifle with 100 rounds in it, and get me the fuck out of here!!!”

But what’s this have to do with the title and tweet? Bear with me here….

As I work on my computer all day, I listen to internet radio. Talk shows, news, etc. I catch a lot of stories shortly after they occur. For the past several days, especially today, I have heard reports of gun shootings all over the country. An Arizona attorney shot and his client killed on Tuesday. A Texas DA shot and killed in front of the courthouse in Kaufman County.

I have to wonder…. Are shootings becoming more common? Or is the news and internet just making us more aware of something that has already been occuring? Shootings are becoming so commonplace that I barely batted an eye when the news broke about the 15-year-old boy that shot and killed his two parents and three siblings – which happened in a house that is within walking distance from my home. 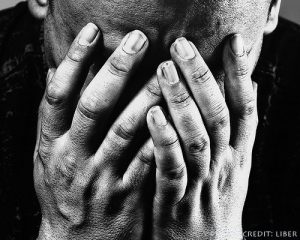 What the hell is going on???

One thing I can tell you for damn sure, I don’t have an answer, and there is no perfect answer. I sure can watch, listen and learn from what we’re witnessing. A small bit of background about my stance on guns…. I have always believed and supported the 2nd Amendment. I grew up around guns. Mildly. More so hunters and family in military and law enforcement. I carried a .38 handgun (legally) for a while. But the world used to more sane and have more common sense in the past. Not so now.

A father of a slain Newtown child was heckled by gun owners during a recent state legislative hearing on gun violence. Heckled! He just buried his six-year-old son, a bullet in his head, and there were people present who cared more about their precious firearms? And please do not throw that 2nd Amendment argument at me. No one is trying to take that away, but just limit the options to devices meant for civilians, not the military. The 2nd Amendment was not meant to be a free-for-all. But then, muskets were the firearms back then. I seriously doubt any one even had any visions close to our arsenal now. And I’m will to bet if they had visions of what would be, they’d think twice about writing the 2nd Amendment as it is written now.

Most strong pro-gun supporters firmly believe our mental health care system needs changes – and it does. But, folks…. that is not the problem here. If we had a top-notch mental health care that the rest of the world drooled over, I’m willing to bet that none of these people, or less than 10%, would have been put on a “do-not-sell-firearms-to” list.

There are so many mass shooters these days, but let’s take a look here. Currently, Dykes. Sure, the media is writing him up as a crazy kook and he probably is. He definitely has had some “anger control” problems which are basically menacing people that come near his property. Now, I lived in Alabama for two years, and to be perfectly honest, Dykes sounds like half the people I encountered when living there. The man is in his 60’s. A minor marijuana conviction in 2000. Big whoop. There doesn’t appear to be anything to have deemed him unstable enough to not own a firearm.

Aurora, Colorado. Oh, boy. The media and the pro-gun people have really twisted this guy in to some psycho. I’ll agree James Holmes was a bit odd, but so are millions of others. Guys like him are a dime-a-dozen especially on college campuses. Highly intelligent. So much they don’t adapt very well to society and never really fit in. But this quality does not cause one to be a mass murderer. That was Holmes’s decision. A cognitive, thought-out decision. Every piece he bought he had every legal right to do so.

Then there is Lanza. Sounds like he was a bit more rocky than Holmes. But apparently not enough of a worry that his mother didn’t lock up her guns. Many people who knew him have described him as scary. But has the media just picked up on this and ran with it distorting the facts so we can perhaps better accept what happened? After all, no one wants to believe that a normal person is capable of doing such a deed. So in order to make it more acceptable in our minds, then he is twisted into some monster that was hidden in the shadows.

Let’s jump back a bit here. Remember the Beltway Sniper Shootings in DC back in 2002? FYI… A Bushmaster was used then, too. Neither of the shooters, Muhammad nor Molva, had given any precursory signs of doing such a horrific thing.

My point is that there is no way to pre-determine who is going to dive off the proverbial deep end and play Rambo. What can be done is using some basic logic and common sense.

Yes, these assault rifles are the common factor in all these cases. Obviously, if any of these killers had been carrying anything that does not fire as rapidly and runs out after 10 shots, they would not have killed near as many people. If any. The purpose of these guns is so the shooter doesn’t have to be a good shot and stop to reload. Mass killing.

Has our media added to the number of shootings causing a very sick phase? Absolutely. No doubt about it. There are people with a type of personality that makes them want to be the center of attention, even if it means taking lives and going to prison. They want to be in history books, in the news, in archives. We must accept the fact that this is one ingredient of this mass-killing stew that will not be changing. End of story.

Predetermining someone’s mental capacity is a major violation of personal rights. This will not happen. Yes, those who have shown to be violent can then be deemed unfit to own or carry a firearm, but that action must occur first – which did not happen with any of these previously mentioned shooters. This is another ingredient which will not change.

So, what can change? Gun control. Simple. Logical. Removed said weapons and high capacity magazines is NOT denying anyone their 2nd Amendment. Limiting the choices, yes. But not denying them.

Then there is Danielle’s tweet. Honestly, it doesn’t have much to do with what I’ve been discussing, but it got me thinking about all this and also gave me a great title. Religious zealots are another ingredient which will not go away, though. Her idea is putting more Jesus into people. There is no guarantee whatsoever this will stop the killings, and this only sidetracks one from the true problem. To the contrary, throughout history more people have been killed in the name of religion than for any other reason. Additionally, Danielle’s way of thinking only means that those who do not have Jesus in their lives will then be killers. I am an atheist who cannot even step on a cockroach let along harm another human being. I do not need a book of stories to tell me what is good and bad; what to do and not to do with my neighbor. Having Jesus does not stop these killings.

And the paradox…. People who fear and hate the government yet are doing whatever they can to protect the 2nd Amendment of our government. It appears as though there is a rather enormous number of people who are convinced that the government will show up at our doors and put us all in FEMA camps. Many are holding and stockpiling these assault rifles for this very reason. Or living in paranoid fear of being attacked by a large mob. Personally, these people sound like the perfect example of who should NOT be allowed to carry a gun.