So when is it okay for a business owner to say “no” due to being offended? Would you do a job for a Neo-Nazi?

This hubbub in Arizona has raised a lot of questions, and anger. Personally, I think those that are supporting AZ SB 1062 are hiding behind the “Freedom of Religion” argument which they have skewed to fit their needs. Everyone has a right to follow and believe in their own religion. Doing business with homosexuals doesn’t take that away from anyone. It may be offensive to some people, but hey, there are a lot of people who are offensive for a variety of reasons. The offended can still go home and do their prayers and partake in their male-female missionary position as any other position may offend someone else. 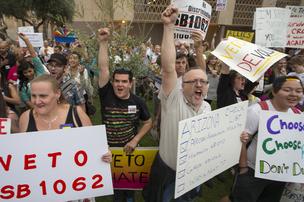 At what point IS it okay for someone who owns their own business, or provides some sort of service, to say “no”? For example, I build websites. That’s my job. Although most of my work is through a contractor, I still freelance on occasion. What if someone from a White Supremacy, Neo-Nazi-type organization came to me to build a website for their organization? I can tell you right now…. hell NO! How is this different than the NM photographer who turned down a job photographing a gay wedding? Look, I don’t agree with that photographer’s ignorance, but he has that right to believe what he believes. I wish people would quit using Freedom of Religion, though, and just admit they don’t like homosexuality. I don’t like racism. Simple.

However, what about a different type of business? I was a server for many years through college. If a White Supremacist, Neo-Nazi couple came into the restaurant where I am working and was seated in my section, yes, I would wait on them. They’ll be out of my life in an hour or so and it’s not like I’ll be hanging out with them chatting about ignorant hatred. I would just soldier up and deal with it. It’s not like I would be actively participating in some manner with their hatred, anyway. But in building a website, I would be involved to a certain extent as I would need to read and view their hateful ideologies while building the site. DING DING DING! I think I just hit it. The level of participation involved with the job, act, business, etc.

When the level of participation is minimal with the offensive action is minimal, just soldier up, do your job and move on. But if a job would entail having to actively witness whatever the offensive behavior is, then don’t you think someone should be able to say “no”? But should there be laws to determine this line?

It’s a very gray line. So gray, one can pick it apart enough to not find any black or white. What would be the defining point with the level of participation between the business and the client or guest?

Now, don’t get me wrong. I hate this bill in Arizona and it should be turned down. Even with having no respect for Jan Brewer, I have a feeling she will turn it down. This bill abuses Freedom of Religion and twists it into a self-serving need. But it has made me think about this issue in general. I would hope I would be able to say “no” to building a website for a White Supremacist and not have to worry about them suing me. Well, like it or not, having that right myself does not mean it can be taken away from someone who believes differently than myself. The photographer should be able to do the same thing – and NOT have to hide behind their “Freedom of Religion.” Just admit you’re an ignorant fool and don’t want to be around homosexuality. It has nothing to do with your religion as I’ll bet it’s been months, if not years, since you went to church. And just how much of the bible have you really read and practice daily? Uh-huh. Just what I thought.

As far as the couple that is seeking the lawsuit against the photographer…. You know what, just move on. Let it go. No one said this was a perfect world. Personally, I wouldn’t want someone like that at my wedding anyway. I know and understand that people must make a stand for equality and shouldn’t back down. But, come one, pick the fights that will bring the best results. This type of lawsuit really sounds whiny to me. Focus back on employers who have fired someone who is gay; fight for equality in marriage; etc. This type of lawsuit is going to just piss off the haters and will end up being counter-productive to the grand cause in the long run.

Here’s another angle to this bill. I’m an atheist. What about my Freedom of Religion? For those that would argue that Atheism isn’t a religion, it is. From the Merriam Webster website, religion is, “an interest, a belief, or an activity that is very important to a person or group.” I believe that there isn’t a god, so I find all churches and religions and acts thereof to be offensive. Where are my rights to not have to see advertisements, commercials, churches on every corner???  If you don’t want to see gay couples, just wait. I’m coming to remove “god” from money, from the National Anthem, etc. (Actually, I’m not. But this bill would give me and other atheists more power to rid the world of public religious references.) When I was a server, I waited on many a pastor in my day – and was tipped like shit, too. “God gets 10%, you don’t get any more than god.”

Basically, it’s not a perfect world and there will always be gray areas. We all need to just get along. Respect other’s opinions even if you think they’re ignorant, hateful, and just plain stupid. Arizona, dump the bill. Gay couple suing the photographer, drop the lawsuit. Move on.