This, by far, is the best and an incredibly simple to understand explanation as to what net neutrality is about, and what may happen if corporations get their way. Explained so even the likes of Ted Kruz can understand, as this was written, created and posted by “The Oatmeal” especially for Senator Kruz. Please, put down your crab tacos and take five minutes to read all the way to the bottom.

FYI… Net neutrality will have a direct affect on anyone and everyone who uses the internet via a computer or mobile device. Everyone and no less. That means YOU!

Also, posted yesterday by TIME, is an article that states that “83% of voters who self-identified as ‘very conservative’ were concerned about the possibility of ISPs having the power to “influence content” online.” Hey, Kruz and Boehner! Are you seeing this?

"Net Neutrality" is Obamacare for the Internet; the Internet should not operate at the speed of government. 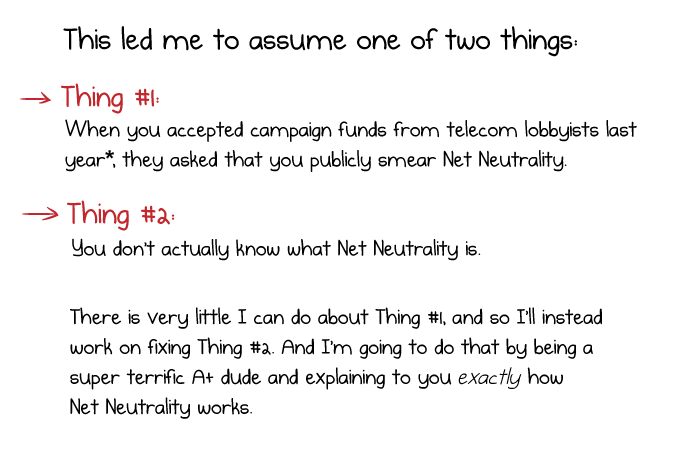 **NOTE: This is not my work, not my creation and is the sole property of the website, “The Oatmeal.” I take zero credit in any of this content. I have decided to post in it’s entirety solely because of the importance of the content. Many people – myself included – do not care much for “site jumping,” so rather than lose a reader by trying to re-direct them to read the full content, I decided to post it all here.

That having been said, please go visit “The Oatmeal” after completing this post. It’s an awesome site!