So Boehner finally Sues Obama. Can we sue Boehner, et al, then?

You definitely know that the United States has become a lawsuit-happy country when one branch of government sues another branch, targeting the President. Talk about a major temper tantrum.

What I would like to know is can we, the people, sue Boehner and the Republican party for wasting our tax dollars in addition to delaying any future progress of Congress doing what they’re supposed to do? But then, what exactly is Congress supposed to do? It’s rather become a grey area now……

Seriously, though, this lawsuit is a major waste of time – and an enormous waste of our tax dollars. I can guarantee Boehner and his groupies are not paying for this out of their pocket. I would imagine that they only way they could get a law office to take the case is because the GOP will be paying BIG BUCKS!

Personally, and I don’t care WHO is in office, one branch of government should not be allowed to sue another branch — especially the President of the United States! OMG! We must be the laughing stock of all the other countries in the world! Even with the bullying tactics of Vladimir Putin, and the brain-washing regime of Kim Jong-un, at least their governments are not throwing tantrums that would put a 2-year-old to shame! I am completely embarrassed and hesitate to admit I’m from the US when I travel internationally.

I read through the lawsuit case filed, but the allegations just seem vague to me, although part of the reason is because it’s written in “lawyer-ese”. The suit sounds like nothing more than a lot of complaining, beating around the bush, the “House has an obligation to stand up for the Constitution”, blah blah blah…. I just don’t see anything clear and precise, such as “Obama and his administration didn’t make their beds on January 14, 2012.” According to the various articles on the internet, one interpretation of one of the items being sued over is in regards to the administration’s implementation of the Affordable Care Act:

The suit accuses the Obama administration of unlawfully postponing a requirement that larger employers offer health coverage to their full-time employees or pay penalties.

Hold the phone!!! Wasn’t the whole GOP party up in arms for these past six years by continually complaining about the ACA, attempting several times to repeal it, and even shutting down the government? And now Boehner is complaining that some of the implementation was postponed???

Image credit:
Boehners caricature head was created by DonkeyHotey.
The rest of the image is my embellishment. 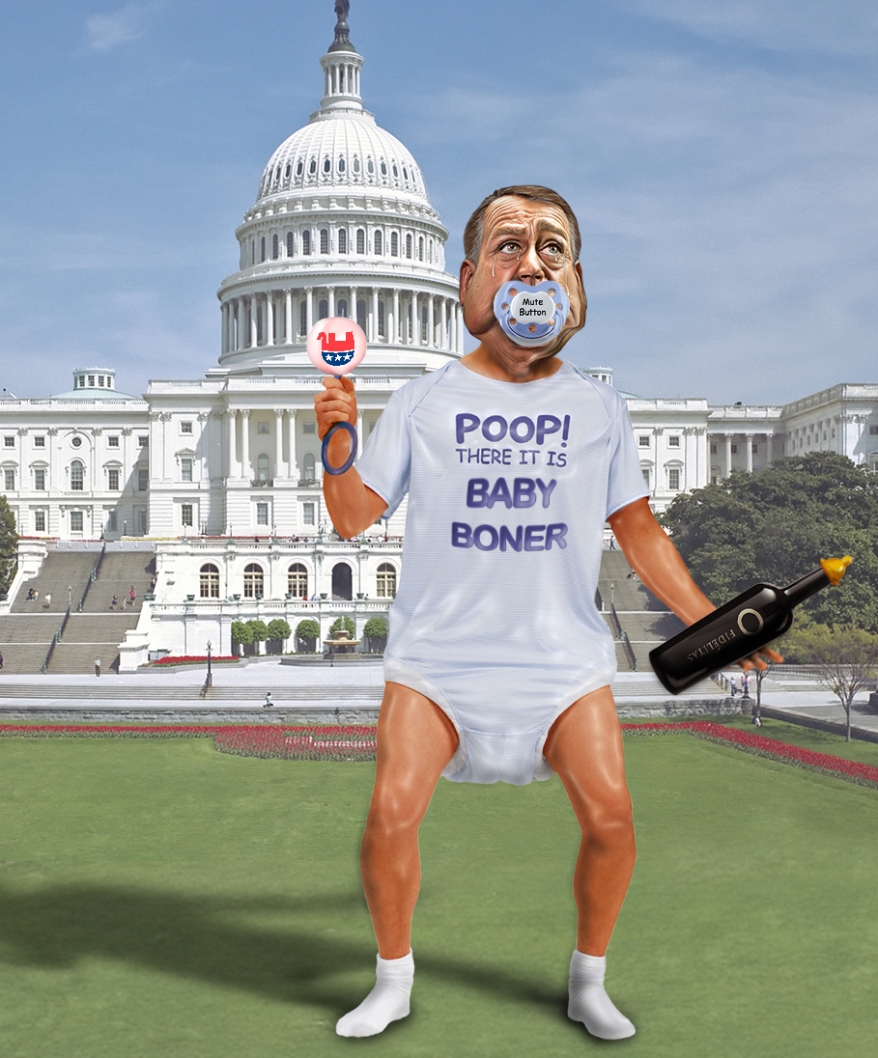