Dad joins in daughter’s ballet rehearsal to save the day 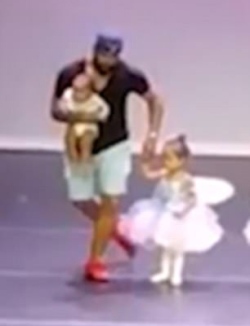 This is an absolutely adorable story.

Whoever said men can’t multi-task obviously has not seen this dad in action, as he jumped on stage to perform alongside his stage-fraught daughter, Bella — all while clutching another child, Suri, in his arms.

Self-employed barrister and busy dad-of-three Marc Daniels is no stranger to balancing multiple tasks at once, but he may well have outdone himself on May 29. During a dress-rehearsal for her first ballet recital in the City Hall of Hamilton, Bermuda, two-and-a-half-year-old Bella began to cry uncharacteristically as she stepped on stage, and Marc was summoned to the wings to try and calm her down.

Going above and beyond the call-of-duty, all the while clutching his youngest daughter, Suri, under his arm, Marc takes Bella’s hand as he plies, spins and expertly points his toes seamlessly alongside his daughter.

The vibrant red/pink shoes he is wearing helps show off his dance moves. At about the 1:38 minute mark, the video does switch to someone else’s camera who started recording after Marc joined in. You can see his dance moves much more clearly in the second video.

Below: Marc Daniels and family. Wife Sara, and daughters (left to right), Gaida, Suri and Bella.

Source: Daily Mail and write-up in the Youtube video above