Toward the end of last September (2019), I joined a local, and official, paranormal group for a weekend ghost hunt at an old haunted hotel in Mountainair, NM. As far as the paranormal goes, I’m still undecided. I don’t necessarily believe, but I don’t NOT believe, either. I want to see evidence for myself. I enjoy watching Ghost Adventures (Aaron is my favorite – he’s so animated), and they have some very convincing evidence, but I need to see and experience it for myself. So, I contacted a local group and they just so happened to have this trip planned that coming weekend.

It was a very nice trip. Beautiful weather! Sunny, warm – but not hot. Definitely an old hotel undergoing renovations again. Many rooms didn’t have beds, and there were no TVs or phones in any rooms yet. Bare minimum. The bathroom didn’t even have a mirror on the wall (it was leaning against one of the walls).

Saturday afternoon was a guest speaker – a demonologist, who had worked with and learned from Ed and Lorraine Warren (the demonologists in the Conjuring, Conjuring 2, and Annabelle series). I did find out that there actually is an Annabelle doll, but she is actually a Raggedy Ann doll. Unfortunately, I did not write down this man’s name and I cannot recall it. But this post isn’t about him anyway. I will say, though, the things he told us about did rock my atheist world. I did ask him afterward if he has ever heard of someone who is a self-professed atheist ever become possessed. He said that no, he was not aware of any, that it’s typically, but not always, Catholic-based people who become possessed. Just think about that for a while.

Night came and we broke up into two groups. We visited the graves of the original owners of the hotel. No action, although the police did show up. They were informed ahead of time that we would be at the cemetery so they came to kindly visit, I suppose.

Next was the local morgue. That is where you’d think there’d be a lot of action. Very little. I don’t have any equipment, as I’m new to this. Just a camera with night vision and my phone to record audio. Others in the group had a device that would light up when it detected a change in energy – which ghosts are supposed to be “made” of energy. If I recall, one device lit up briefly at the morgue. However, right behind me, there was a very large bang – the sound of something being dropped or being hit. It made me jump. We looked and nothing had fallen so that was a possible paranormal experience.

Back at the hotel, we went around to various rooms. I had some action with the light-thingy, but not much. The night ended, I was tired, and still not convinced one way or the other.

On Sunday, on the way back to Albuquerque, I stopped at the Abo Ruins Salinas Historical National Monument. I LOVE our parks and monuments and always ready to visit any I drive by.

Again, another beautiful autumn New Mexico day – which is my favorite time of year here. When I stopped, I was the only one there. It is located in a rather remote area of New Mexico and typically just local traffic drives by, so very few visitors. It sat back off the main road may be close to a mile, and the road in was part gravel, part paved. There was a home I drove by next to the ruins. Below are photos I took of the ruins. After taking photos, I decided to walk the paved path around the perimeter of the ruin’s grounds. I still was the only one there.

I had just passed the halfway point of the trail, was behind the ruins and started to work my way back (the trail was a loop) when I heard voices. It sounded like an adult woman and an older child. I was raised to respect other’s privacy so I kept to my own thoughts rather than trying to hear what they were saying as they were loud enough, if I had tried, I would have been able to understand some of what they were saying. I continued on the path, stopping for an occasional photo. They continued conversing – sounding like they were fairly close behind me – or at the ruins as I was next to the main ruin at this point. Still, I ignored them deep in my own thoughts.

Eventually, their voices dwindled and I came to a curve in the trail which came up over a slight hill and could then see the parking lot. My van was the only vehicle there. No other vehicle. Then I started thinking about it. If anyone arrived while I was at the far end of the trail, the road is still in clear view and dust would have quite visible – yet I saw none. The voices were always behind me, away from the parking area, so if anyone had dashed to their car and left before I returned, again, I still would have seen the dust. But I would have also seen the people as their voices disappeared just before I came over the hill.

As I previously mentioned, there was a house next door. The house was upwind and in front of me the entire time. The voices were always behind me – and fairly close. According to the laws of physics, it is impossible for sound to carry past me then do a 180″ turn so I would then be able to hear sounds coming from behind me. Plus that house was quite visible and I never saw anyone outside.

I walked around the ruins a bit more. I went up to a higher point to look out over the grounds below me to see if there was anyone out there. No one. I walked around a bit near the visitor’s center, which was closed and locked. Read a few things on the bulletin board, used the outside toilet, and decided it was time to move on.

The road does go past the ruins so I decided to go that way first to see if I would come upon another home so I would have a reasonable explanation for those voices. The road ended perhaps 1/2 mile beyond the ruins, so that explanation was not possible. Sure there could have been two women, or a woman and young female, who walked in from the desert, then turned and walked back into the desert before I saw them, but I highly doubt that. This is a very remote, high desert, full of rattlesnakes, cattle, and coyotes.

So what were these voices? Were they voices from the past? I never listened close enough to determine if English, Spanish, or a Native American tongue. I will never know but I guarantee I thoroughly checked out the ruins searching for a viable source of the voices, and there were none.

So my ghost hunting trip ended up not being an entire flop. 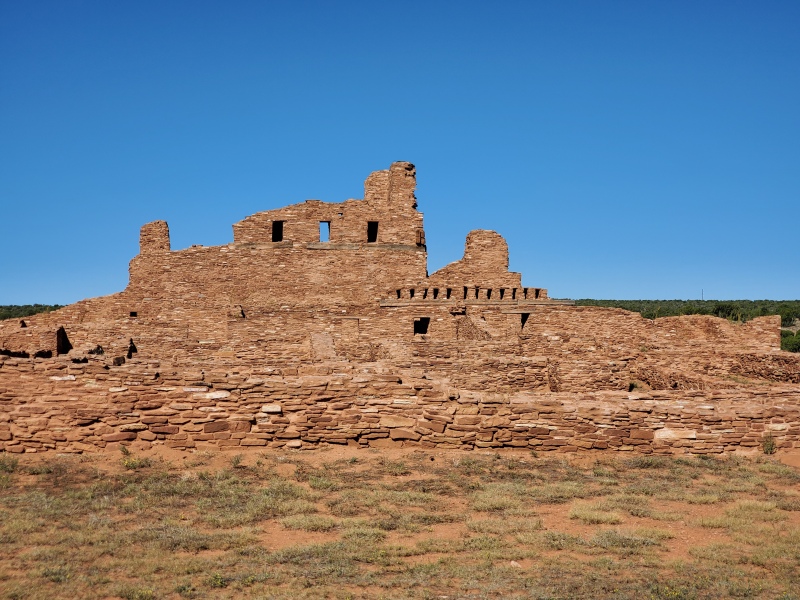