Photo of heartbroken father, Robert Peraza, at the 9/11 Memorial

Robert Peraza, who lost his son Robert David Peraza, pauses at his son’s name at the North Pool of the 9/11 Memorial during tenth anniversary ceremonies at the site of the World Trade Center.

Robert Peraza lost his son on 9/11 after he was trapped on the 104th floor of the North Tower, just above the gaping hole left in the building by the impact of American Airlines flight 11.

As the 9/11 Memorial and Museum was opened today to families of victims, Mr Peraza touched his son’s name, fell to his knees and lowered his head.

The same man later gathered the courage to rise the stairs to the podium where family members read the names of loved ones who perished during the terror attacks.

Mr Peraza said he did not have to look hard for his son’s name on the memorial – he was somehow just drawn to it. ‘I just began to walk, and I found it,’ he said. ‘It was, to me, very emotional to find the name. I knew it was in the north pool. It’s very moving.’ He added: ‘All I am doing here is to honor his memory. The issue isn’t about me.’

Mr Peraza told the New York Post that his family had worked tirelessly to keep Rob’s memory alive, raising almost $250,000 to fund a scholarship in his son’s name at St. Bonaventure University, where he studied.

Rob died aged 30 on 9/11, a bond trader at Cantor Fitzgerald who was trapped above the smash and never returned home afterwards. 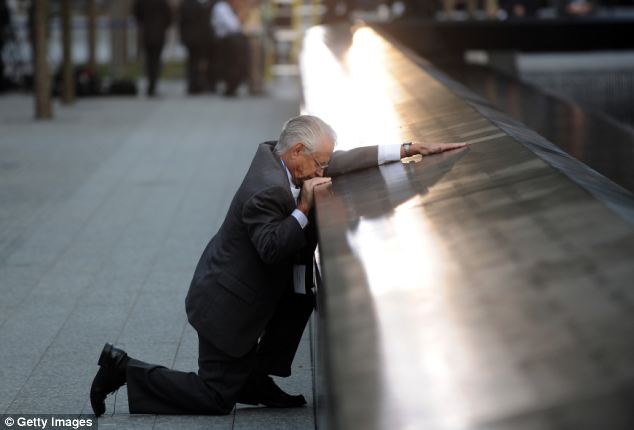