HPD Pull a Shotgun on Crowd of Houston Free Thinkers 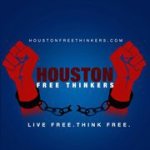 The “Houston Free Thinkers” is a self-proclaimed civil liberties organization, and on January 27th, they were having a party. The party was located in the middle of a residential area at place called The Compound in Third Ward. Over 200 people were present and three bands were playing. The neighbors complained about the noise and called in the police.

The officers confronted the partiers who voiced their opinions and protests, and I’m sure alcohol loosened their mouths and brains. Regardless, the scene in this video does not warrant the actions of the police. The first bad move was an officer stomping over to a small collected group of people, targeting a woman, and roughly pulling her out. It is not clear what provoked the officer’s action, but no threat is apparent.

But what made mouth eyes pop out of my head and my jaw drop was when the police officer pulled out a shotgun – and cocked it.


.
The Free Thinkers may have been loud, may have disturbing the neighborhood, and probably out of line. But this type of reaction from the police is completely out of line and entirely not necessary.

This entire scene appears to be a combination of fault with both parties. When our local Occupy movement started on October 1st, I was there. Partly because I supported the reason behind the movement, but also for photojournalism reasons. When the police arrived, they were actually well behaved, which is unusual for the Albuquerque Police Department. The APD is currently under investigation by the DOJ for an excessive amount of police shootings.

During our protests, what I did not, and still do not understand, are why people provoke the law. Yes, I do stand firmly in my belief of our First Amendment, however, common sense needs to prevail. Personally, I do not care for drama. If an officer tells me I need to get out of the street (which they often did because I had no fear to walk into the street with my camera and start shooting away) then I would get out of the street. My right of free speech was not being denied. I just moved somewhere else and continued shooting. However, when over-zealous protesters would then start arguing with the officers, it’s like using a cattle prod on an bull… it’s going to piss them off. Life is not a bowl full of cherries. If a road block comes up, find an alternate route.

Specifically in regards to this incident with the Houston Free Thinkers, they were rowdy. They were noisy. The neighbors also have a right for peace and quiet in the late hours of the night. When the police showed up, the partiers should have quieted down. This was not a matter of free speech, as you hear someone in the crowd yell out. Abusing the use of that right reminds me of the “boy who cried wolf.”

However, the officers reaction to the revelers is completely out of line. Two wrongs do not make a right.
.