That Awkward Moment… Romney Booed by the NAACP

Today, Mitt Romney really made a very baaaaad mistake. When speaking to the NAACP in Houston, he – once again – declared his promise to repeal “ObamaCare.” I can only imagine how his heart and stomach sunk when he was met by several seconds of boo’s from the crowd and realized the enormous mistake he made. I do wonder, however, if the booing would not have been so bad if he had used the correct name of the act, which is the Affordable Healthcare Act. When “ObamaCare” is said in the manner in which Romney does, it comes across as derogatory. Naturally Obama has supporters of all races, ages, nationalities, and so on. But he most definitely has a large amount of support from the NAACP.

Romney is just NOT the sharpest knife in the drawer. He is continually saying the most asinine, idiot statements – and often does not even comprehend the stupidity of what he just said.

Here is the footage of the chorus of boo’s. And you know what… I saw this hours ago, and I am still grinning that shit-eating type of grin, shaking my head in befuddled amazement, and laughing to myself. What an idiot. Seriously… what a FOOL! Oh, Horus help us if this man were to be elected as President. He’s the wooden-headed, no brains allowed puppet with the strings being held by the Koch Brothers. Anyway, the video….

After the booing subsided, Romney then continued on, “You know, there was a survey of the Chamber of Commerce — they carried out a survey of their members, about 1,500 surveyed, and uh, they asked them what effect Obamacare would have on their plans, and three-quarters of them said it made them less likely to hire people. So I say, again, that if our priority is jobs, and that’s my priority, that’s something I’d change and replace.”

In all honesty, I don’t believe that statement one least little bit. Or else they pick and choose who to give the survey to. And 1,500 people in a survey is nothing, especially when it is not a valid representation of our society as a whole. On second thought, those results ARE probably true as a survey which does represent the people throughout our country would NOT have this same result.

ROTFLMAO… Help me, I’ve fallen laughing and I can’t stop! 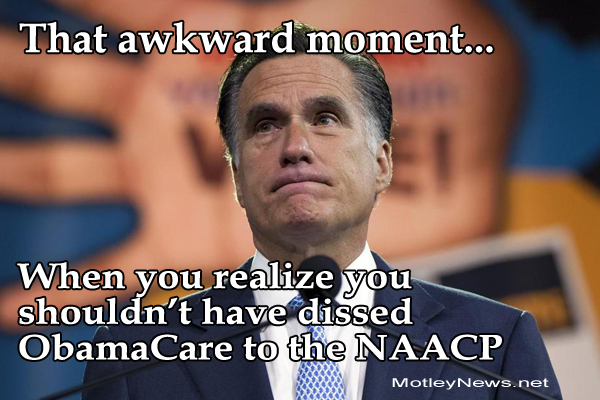