“Any time something is new, there is going to be some glitches.” Rep. Tim Murphy (R-PA)

These are actual quotes.

Rep. John Boehner (R-OH): “The implementation has been horrendous…. The good news is that the competition that’s being created has lowered premiums significantly.”

Rep. Nathan Deal (R-GA): “Like most significant programs, the new benefit has not gone without a few isolated glitches and unexpected problems. But I believe that if there is anything wrong with the plan, most of it has been fixed and that that hasn’t, can be fixed over time.”

Rep. Joe Barton (R-TX): “Rather than trying to scare and confuse seniors, I would hope we can work together as we go through the implementation phase to find out what is wrong with the program and if we can make some changes to fix it, let us do it and let us do it on a bipartisan basis.”

Rep. Kevin Brady (R-TX): “I think it needs to be understood that in a major reform, an improvement of a program like this, there are bound to be glitches.”

Unfortunately these quotes are not about the ACA (aka “Obamacare“). They are from early 2006 when the GOP screwed up their roll-out of Medicare Part D. Just goes to show that it all depends on which party the new bill is supported by and comes from.

BTW… the grammatical error from Murphy’s statement is driving me insane! Should be, “… there ARE going to be some glitches.” He’s a Republican, I suppose poor grammar goes with the territory. Okay, I feel better now. 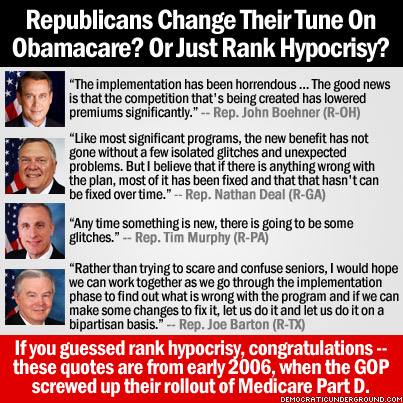