As I’m sure many of you have heard by now, Donald Trump’s recent rally in Birmingham produced some of the biggest – and most dangerous – lies yet. As the Twin Towers came down on that fateful day, September 11, 2001, Trump claims he witnessed thousand of people cheering it’s demise: 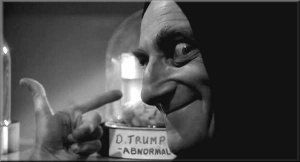 Fact-checking has proved this false, but common sense shows fact enough. For one, when the Towers started coming down, those who were responsible had not yet been declared – neither al-Qaeda nor Osama bin Laden had been pointed at yet. For all we knew, the first crash could have been a flight gone wrong. Therefore, unless someone had direct knowledge from the butcher of this plot and plan, they’re not going to be en masse cheering.

Secondly, and think about it… do you really think thousands of Muslims are going to take to the streets all cheering as the Towers come down? Especially not knowing why at that time? Whether or not anyone hates or loves a country, mainstream people are just not like this. I can imagine ISIS acting like this, but not typical Muslims living here in the US.

Donald Trump is doing nothing more than fear-mongering. His goal is obviously to raise hatred, animosity and flat out plain racism towards any group who are not white Christians. He recently targeted blacks by retweeting this meme (seen below)- which has been rumored to have originated from a Neo-Nazi Twitter account (source).

A more respectable Twitterer did share the actual stats:

@realDonaldTrump Your figure to the right is incorrect. The bar graph shows correct FBI figures for 2011 homicides. pic.twitter.com/NQ3zpgZEUf

Here is the original Tweet followed by the bio of the person who originally tweeted it (fyi – his avatar is the symbol for the German Faith Movement): 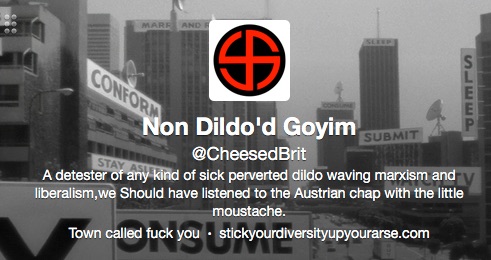 It amazes and completely baffles me that this beast has so many followers. He is full of nothing but hate. He would destroy this country – and we cannot file bankruptcy to repair the damage.

On an end note, I do firmly believe that Carson would be worse to have as President than Trump. Trump is textbook narcissistic, hateful, racist, bigoted, and ignorant. But Carson lives in another world. He has some serious mental problems. I can’t really put my finger on it, but there is something very wrong about Carson and I think he would be a very dangerous person – moreso than Trump.

And now, in Iowa, Cruz has moved into second place, ahead of Carson and behind Trump, who is now in the lead. Go figure….

SIDE NOTE: How dare this racist asshole (Non Dildo’d Goyim) use a screenshot from the movie, They Live!! If you haven’t seen it, I highly recommend watching it. Sure, it’s campy, especially when compared to modern alien-invasion movies. But listen to the message, ignore the bad acting and effects.