Today, while in an interview with FAUX News, Donald Trump confessed that he is the magic behind the new Star Wars movie, The Force Awakens.

"J.J. Abrams called me out of the blue several years ago and asked what I thought about creating another Star Wars movie. Naturally, I told him it was an excellent idea. After all, I wrote the original story when I was 7 years old – no, wait. I was six years old when I wrote it."

Trump leaned back to reflect upon his memory. "It was during one of our trips around the world. We were somewhere over the Pacific and, being a young child, I was bored. Space travel had not been invented yet, however, that didn’t stop my mind from wandering to the stars. To make a long story short, I sat down, took pen and paper, and Star Wars was born."

"It was in the early 1970’s," Trump reminisces, "and heard about a great up-and-coming director, George Lucas. At that time, Lucas was in the early stages of American Graffiti. I liked him and I decided I wanted to take him under my wing and make him great, so I gave him a call. We met over steak and lobster – of which I paid for, of course – and told him all about the story I wrote when I was six years old. Lucas immediately loved it – everybody loves me and all that I do. Since I wasn’t doing this for the money – because I’m such a giving, unselfish person – I gave him the story, no strings attached. In fact, I insisted that my name be left out, after all, I am a very modest person. My greatness flows from my every pore, so I have no need to boast about every accomplishment I’ve done since I as born. Did you know I actually built the then-future Trump Tower out of blocks when I was but just two years old? It was amazing – I can remember every detail. Towering over 20 feet in the air. I rigged a pulley system, all by myself, so I could hang and reach every inch of my creation. After all, I was only three feet tall back then."

"Back to Star Wars…. I did have one request, however. I asked that one of the characters have some sort of hidden tie to me – and that is how Chewbacca’s hair was created. Chewie was originally reptilian in nature." Trump chuckled to himself as he thought about that connection. "The rest is history."

"Jumping back into the present, being such a Hollywood icon that I am – everybody loves me – I came to be the silent partner of the production of The Force Awakens. Without me, this never would have happened. Nearly every single day, Abrams called me, "What do you think about this? What should we do here?" It was non-stop. But being the great person I am – everybody loves me – I directed the Director with every scene, every prop, every extra, every word in the script, and had the final say in selecting the cast members. I often joked with J.J. that he needs to pay me a consulting fee." Trump then paused with a look on his face which seemed to indicate that this is something he just may pursue.

"I know you’re wondering how I had the time to do all this…. Well, I’m amazing. So amazing, I just love to look myself in the mirror and compliment me about all I have done. There is no one else in the world that can manage a life like mine as I do. When you’re this amazing, you can do anything. Have I told you about how I designed the Space Shuttle for NASA? Well, I’ll tell you about that another time. I can guarantee, though, that there will never be another like me."

NOTE: THIS IS SATIRE!!! Hopefully it is obvious to you that this is a bunch of horseshit, but you never know. After all, some fool Republican politician thought that The Onion’s Planned Parenthood Opens $8 Billion Abortionplex post was real.

I mean absolutely no insult to George Lucas, J.J. Abram, Chewbacca, anyone and everyone else involved with the creation and production of the greatest series of movies ever produced. They are the ones who are truly amazing. Not this egotistical, bigoted, racist buffoon – Trump, who I do mean to insult. As a far as I know, though, "The Donald" has had nothing to do with any facet of Star Wars, past and/or present. But he did play with blocks as a child, even stealing his brother’s blocks so he could create "a beautiful building." 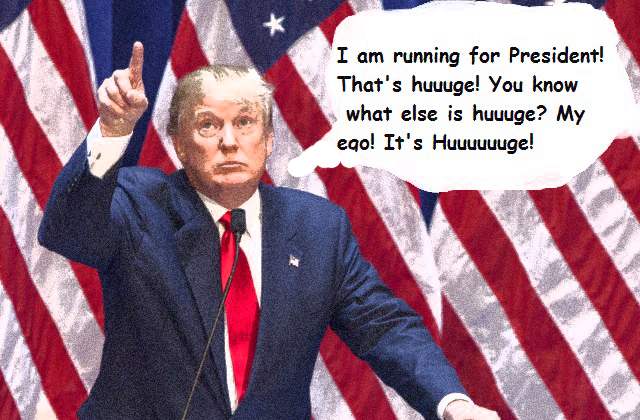