This is way too late in the coming. Now, post-election, psychiatrists and psychotherapists all over are coming forward as they are greatly concerned about the future of the US. The overwhelming diagnosis? “Malignant narcisissm.” I don’t have any background in psychiatry, but in this case, it does not take a brain surgeon to see that Trump suffers from a mental disorder – which will have profoundly harsh effects on the United States and the people both within and outside the US. Citizens or immigrants.

Here is a list of the criteria of Narcissistic personality Disorder (go to page 9).

A pervasive pattern of grandiosity (in fantasy or behavior), need for admiration, and lack of empathy, beginning by early adulthood and present in a variety of contexts, as indicated by five (or more) of the following:

I could go into a list of examples of when he has portrayed each criteria, but there really isn’t any need. Just go to any video of a Trump rally. Or any speeches and other statements after he has been inaugurated. They generally include all of the above. I would like to point out #3, “Believes that he or she is “special” and unique…” During his entire campaign, Trump declared “I alone can fix it,” which we all know is not true.

Trump grossly exaggerated the state of our union describing it as completely failing and about to collapse when, in reality, the US is doing better than it has for over a decade. Sure there are many areas that need reviewed and changed, but there is nothing collapsing ready to destroy our country as Trump indicates.

Here are a few of the websites posting about these concerns from mental health experts. Take a pick. There are a lot more where they came from. Many of them report the same quotes and details as other sites.

John D. Gartner, a practicing psychotherapist who taught psychiatric residents at Johns Hopkins University Medical School, minces as few words as the president in his professional assessment of Trump.

“Donald Trump is dangerously mentally ill and temperamentally incapable of being president,” says Gartner, author of “In Search of Bill Clinton: A Psychological Biography.” Trump, Gartner says, has “malignant narcissism,” which is different from narcissistic personality disorder and which is incurable.

Refinery29.com: This Doctor Nailed The Problem With Diagnosing Donald Trump With Mental Illness

PsychSceneHub.com: Donald Trump – Insights From a Psychiatrist and Psychotherapist

StatNews.com: ‘Crazy like a fox’: Mental health experts try to get inside Trump’s mind

….a child who “gets reinforced like crazy for being the center of attention” becomes emotionally addicted to that adulation, McAdams said. Trump’s father, Fred, told Donald, according to biographies, “You’re my favorite, you’re a killer,” McAdams noted. “Rather than satisfying and soothing” one’s emotional and psychological need to be the focus of attention and valued, he said, “that pours gasoline on the fire,” stoking blazing narcissism and the need to “seek glorification over and over because they can’t get enough.”

DailyNews.com: Ex-Trump executive: I knew he was ill for last 35 years

It is gratifying to see a confirmation of our speculations. I pray America survives his presidency, for however long it lasts.

In closing, Keith Olbermann has some very important words here…. 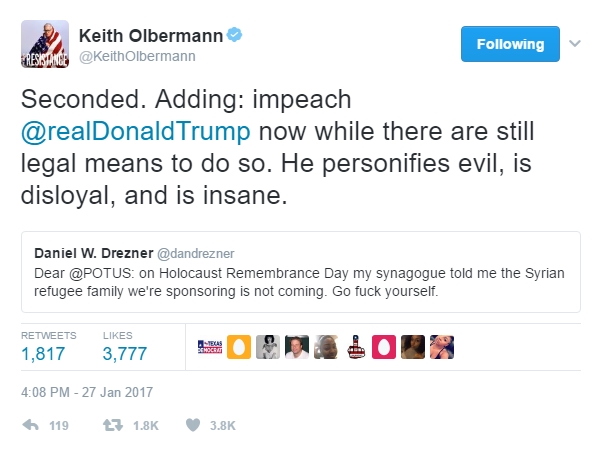 I have noticed that some very large news websites outside are the primary sites that are reporting these concerns from the psychiatric community. None of the big US news sites have yet to come forth. Why? Well, Trump just fired the acting attorney general, Sally Yates, on Monday when she came forth and declared she would not back Trump and his ban. Don’t think for one moment that Trump will not fire anyone else that opposed him if he has the ability to fire that person. If not, he’ll find a way to make sure it is done by someone else. I’m sure the reporters don’t want to fall into the category. Nor the owners of the newspapers. Even though they are well within their rights to do so, they just want the easy road, I suppose. 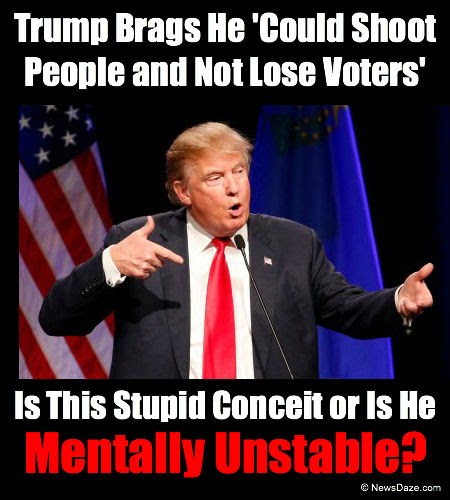