We all know Trump lies. More than any president in history. Perhaps all the presidents wrapped up in one. Looks like his proud Saudi Arabia $10 million arms deal he’s been boasting about is fake. Ayup. F..A..K..E. According to Bruce Riedel from Brookings, the deal is nothing more than previous offers wrapped up in a different package and bow. There are a bunch of letters of interest or intent, but no contracts. Additionally, none of the deals identified so far are new, they all began when Obama was in office.

According to the article, The $110 billion arms deal to Saudi Arabia is fake news, Riedel writes:

An example is a proposal for sale of four frigates (called  multi-mission surface combatant vessels) to the Royal Saudi navy. This proposal was first reported by the State Department in 2015. No contract has followed. The type of frigate is a derivative of a vessel that the U.S. Navy uses but the derivative doesn’t actually exist yet. Another piece is the  Terminal High Altitude Air Defense system (THAAD) which was recently deployed in South Korea. The Saudis have expressed interest in the system for several years but no contracts have been finalized. Obama approved the sale in principle at a summit at Camp David in 2015. Also on the wish list are 150 Black Hawk helicopters. Again, this is old news repackaged. What the Saudis and the administration did is put together a notional package of the Saudi wish list of possible deals and portray that as a deal. Even then the numbers don’t add up. It’s fake news.

This Trump-annoucement falls into the "Liar liar pants on fire" category. The hypocrisy is, once again, thick as Trump endlessly complains about how he hates "fake news" from the media. Yet he has no problem spreading his own fake news in an attempt to make himself look better — look like he did something overseas other than shove a prime minister out of his way. Narcissistic mixed with low self-esteem. That’s a dangerous mix. 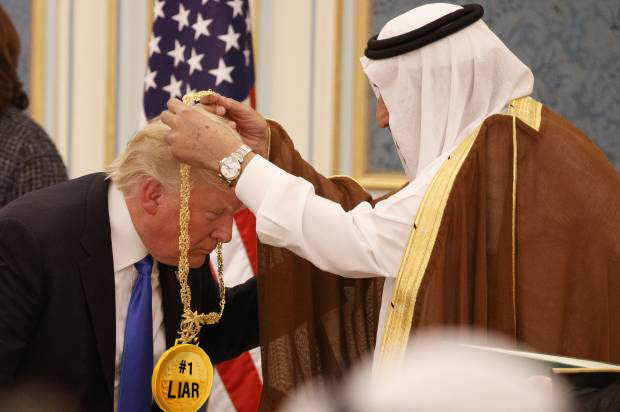