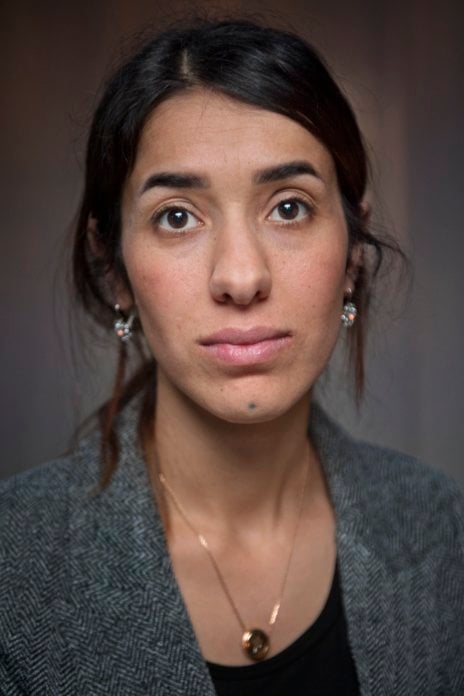 This video has brought forth so many feelings that I really am unable to express myself fully. The strongest feeling of all, though, is a complete and total sickness to my stomach. I want to scream so loud that the entire world would hear me. I want to cry so sorrowfully that my tears would fill the ocean. This is, in my opinion, one of the saddest moments in presidential history – and there have been many since trump took office. trump’s complete lack of empathy – total, 100% apathy – is completely visible in the matter of 15-20 seconds.

trump cares naught for this woman, Nadia Murad, who is pleading her case to him. And I’m quite sure he does not care for anything any of the other women in his office are there to present to him.

Imagine if you were Nadia. And, honestly, you could be a man instead of a woman. It doesn’t matter. It is completely clear that the only thing on trump’s mind is getting this interview over.

[NOTE: I am starting this video right at the point where Nadia tells trump that her mother and brothers were killed. But I do ask that you watch the entire video — and pay very close attention to how trump acts during the entire video.]

When trump took office, I pretty much threw my hands up in the air. My government failed me. My electoral college failed me. I haven’t been blogging near as much as I used to. I barely keep up on the news – although I have been watching more once Democrats took back the House. However, watching trump in this video has renewed my desire to do all I can to get his ass out of office come 2020. I’d love for him to leave before then, but, you know as well as I do that won’t happen. So must focus on this upcoming election.

Which brings me to beg to you, please share this video. I’m actually very shocked that this hasn’t hit the MSM any more than it has. I would have thought trump’s total apathy and complete lack of attention to this woman telling him her mother and brothers were killed would have been headline news. Rather, I’ve seen the headlines read, like PBS did, "Trump asks Yazidi human rights advocate why she got her Nobel prize," which he did do – and it was a legitmate question, really. I think he should have been prepped beforehand, but I don’t have those levels of expectations with trump and his admin. But I would have thought that PBS would have emphasized the real tragedy of this interview — asking where Nadia Murad’s mother and brothers were right after she told him they were killed.

Excuse me while I go scream and cry for a while.

Click HERE for more about Nadia Murad and why she won the Nobel Peace Prize.

p.s. I purposely do not – and will not – capitalize trump’s name. They are not typo’s. I refuse to give him even that iota amount of respect.