There are many conflicting reports about Kim Jong Un being dead or alive after reportedly undergoing heart surgery on April 12. The world is awaiting confirmation. Rumors (or truth) started circulating when Jong Un missed the commemoration of the 108th birthday of his grandfather, North Korea founder Kim Il Sung, approximately ten days ago. 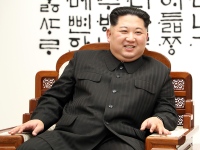 According to the People’s Ledger, "Breaking: North Korean dictator Kim Jong Un is dead according to Chinese report":

Following reports from a Japanese media outlet that Kim Jong Un was reportedly in a “vegetative state,” a Hong Kong Satellite Television executive is reporting he is dead.

Reports and rumors have been swirling for days that he recently underwent emergency heart surgery earlier this month and the Hermit Kingdom ruler has not been seen publicly for some time.

A Vice Director for Hong Kong Satellite Television, who is also the niece of a Chinese Foreign Minister, told her 15 million followers on social media that Kim Jong Un was dead. She cited a “very solid source.”

“Well, it’s a closed society, I don’t know anything directly,” he said. “But I’d be shocked if he’s not dead or in some incapacitated state because you don’t let rumours like this go forever or go unanswered in a closed society, which is really a cult, not a country, called North Korea.”

According to The Sun, "THE MAN BEHIND THE MISSILES Is Kim Jong Un dead? Conflicting rumours circulate as North Korean dictator ‘goes missing‘":

He had last been spotted four days prior at a meeting with other government officials.

The dictator is overweight and is said to smoke and drink heavily.

His predecessors in the dynasty, his father, Kim Jong-il, and his grandfather, Kim Il-sung, both died from heart problems….

Some reports, attributed to senior party sources in Beijing, said Kim had died after the Chinese medical team arrived too late to save him following failed heart surgery on April 12. While other reports suggest he is not dead after an operation to insert a stent went wrong because the surgeon’s hands were shaking.

Another report from a South Korean media outlet reported US spy planes had tracked the dictator and his entourage down to his beachside palace in Wonsan on the east coast of his kingdom.

Satellite photos believed to show the train likely belonging to Kim Jong Un at the resort have been review by a US-based think tank.

According to DailyMail.co.uk "Kim’s Alive! South Korea says despot Jong Un is NOT dead as defectors from his evil regime also say they believe he is still healthy":

Foreign policy adviser Chung-in Moon said his government’s position is firmly that the despot is not dead.

The aide said Kim had been living in the Wonsan area of the country since April 13, adding to Fox: ‘No suspicious movements have so far been detected.’

Rumours of his death emerged from the vice director of Hong Kong Satellite Television Shijian Xingzou, who claimed a ‘very solid source’ told her Kim was dead.

Eventually we will find out, but who knows how long. If Jong Un is deceased, I seriously doubt that North Korea will publicly make this announcement. They will just continue governing just as if he was alive as his children are much too young to rule right now.

According to Canoe.com, "If Kim Jong Un is dead, who takes over North Korea?"

North Korea has never publicized who would follow leader Kim Jong Un in the event he is incapacitated, and with no details known about his young children, analysts say his sister and loyalists could form a regency until a successor is old enough to take over.

I wonder if trump is mourning the death of his best friend? trump has commented:

“I think the report was incorrect,” Trump said at a White House briefing, adding that he heard the reporting was based on “old documents”.

But the whole world now realizes just how much of a liar trump is.