A new report from the reformist Justice Policy Institute concludes that private prison companies have not only benefited from increased incarceration, they have also helped fuel it.

According to Gaming the System: How the Political Strategies of Private Prison Companies Promote Ineffective Incarceration Policies, private prisons have increased their “market share” of the overall prison population. While the number of inmates over the past decade has risen 16 percent, the number in private federal facilities has risen 120 percent and the number in state facilities has risen 33 percent. Meanwhile, the two largest private prison operators, Correction Corporations of America and GEO Group (formerly Wackenhut), raked in a combined $2.9 billion in revenue in 2010. 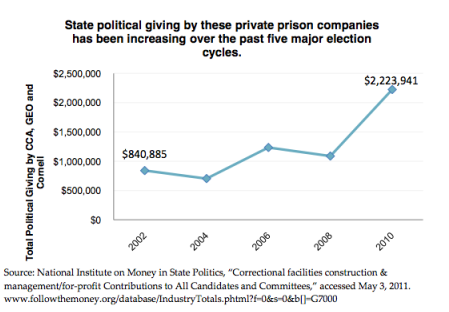 While private prison companies may try to present themselves as just meeting existing ‘demand‛ for prison beds and responding to current ‘market‛ conditions, in fact they have worked hard over the past decade to create markets for their product. As revenues of private prison companies have grown over the past decade, the companies have had more resources with which to build political power, and they have used this power to promote policies that lead to higher rates of incarceration. …
While private prison companies may claim that changes in criminal justice legislation are “outside our control,” they are in fact engaged in a number of activities aimed at increasing their control of the market; this includes applying political pressure to lawmakers, working to influence elections, and building relationships within agencies or with government officials to directly formulate policy. …

One way to do that is to make direct, monetary contributions to political campaigns for elected officials and specific policies.

How much? A bundle. In the past five election cycles, the three biggest companies in the private prison industry have contributed $835,514 to federal candidates and $6,092,331 to state politicians. Democrats received 31.8 percent of the money, Republicans got 59.1 percent, and 8.7 percent went to ballot measures, according to the institute.

Lobbying is a big part of the industry’s approach. CCA had 41 lobbyists in just three states—Tennessee, Nevada and Florida—from 2003 to 2010. The institute found it impossible to track all the money spent on lobbying at the state level by these companies as a consequence of widely differing disclosure laws. With the arrival of the Citizens United ruling, that task will not become easier.

The “revolving door” also benefits the private prison industry, with many former government officials joining prison companies the same way ex-colonels and ex-generals join the weapons industry upon retirement, and for the same reason: influence among their former colleagues. It works in the other direction, too, of course. One example cited in the institute’s report is Stacia Hylton, director of the United States Marshals Service.

In 2010, Hylton started a private prison consulting firm, called
Hylton Kirk and Associates, while still working at the Department of Justice as the Federal Detention Trustee. After retiring from the trustee position, Hylton agreed to a consulting contract with The GEO Group worth $112,500.90. As Director of the U.S. Marshals, Hylton will head an agency that has a long-standing contractual relationship with The GEO Group. In 2010, the U.S. Marshal’s accounted for 19 percent of GEO’s revenue. With Hylton in a position to oversee government contracts with private prisons, the ongoing influence of private prison companies in the public sphere is virtually guaranteed.

One of the key claims of the prison industry is that private is cheaper. That may be true in some instances, but studies by the Government Accountability Office, the National Institute of Justice and the University of Utah have found no cost savings. Often, this is because the private companies fail to mention hidden costs of their operations and make low-ball estimates of their expected overhead when bidding on a new prison. The one place they regularly beat the public sector is the speed with which they typically build a prison. 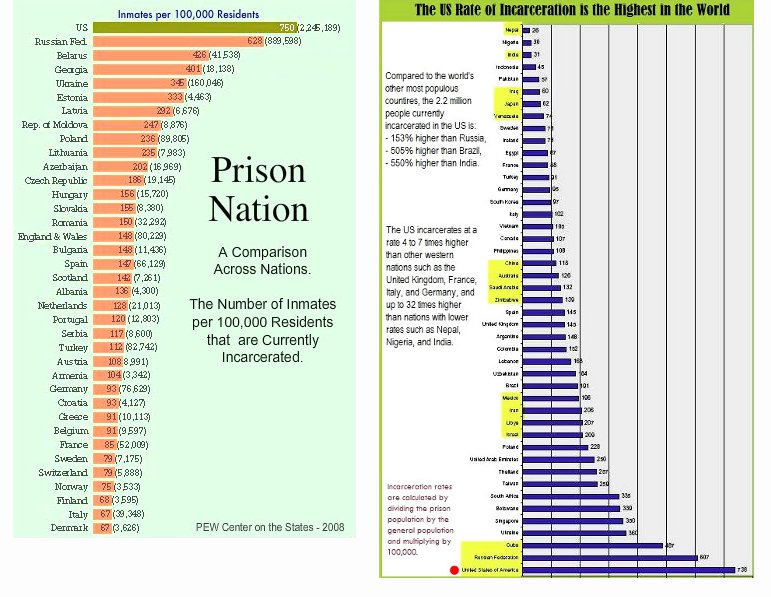