Private prisons are one of the largest corporations in history to profit directly from the misery of people, and now they want to buy out state-ran facilities. The main stream media is not helping matters either as they simply sweep the details under the rug, and promote the false notion that criminals get what they ask for. Most American citizens live under the philosophy simply because they grew up hearing, “Lock them up and throw away the key.” What would you think if you found out that most of the inmates in private prisons really do not belong there? Not in prison, anyway. Laws are being created due to the heavily financed lobbying by CCA and GEO Group which are purely passed to increase the prison population. Why? Because for every inmate housed, those who own stock in a private prison profit each day per each inmate. There are no losses… pure profit.

Now the private prison industry has grown to large, profitable and POWERFUL that hey have more than enough money to pay CASH to buy out state run facilities.

Are you catching on here? Are you seeing the conflict of interest? You never know, some law may be passed in the near future which may easily put YOU in prison. Let’s say… five unpaid parking tickets equals 30 days. No bond. No “good time.” Only straight time, no exceptions. Why? Because they can and they have been creating absurd laws just to increase the prison population. And they will continue to do so. With CCA and GEO Group buying up all the state run facilities, chances are your 30 days will be done in jail owned by a private prison corporation. So, while you are sitting there doing your 30 days of time over five lousy parking tickets, some stockholder is walking to the bank laughing because they just made a profit because you not paying your parking tickets.

In the last chart at the bottom of this post, take special note of when the jump in incarceration began… early 1980’s – which correlates to the time when the private prison industry began. Are you catching on yet? 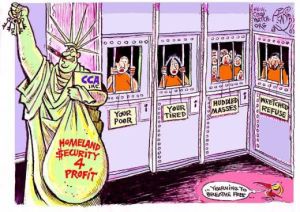 Why do you think so many laws are being passed against illegal immigrants? Not to solve the problem of illegals, but to PROFIT off of them. Illegals immigrants are poor, on the run, and most certainly cannot seek paid counsel. They become victims of the system and all they can do is follow the yellow line. The states and private prison industry KNOW this, which is why they pass these laws. Sure, they tell you it is to fight illegal immigration, but it isn’t. IT IS PURELY TO PROFIT OFF OF THEIR INCARCERATION AND MISERY.

Remember, in past centuries, just like OUR ancestors did (unless you are Native American), they came here seeking a better life for themselves and for their family. Yes, times have changed, but the overall reason why so many illegals enter our country is for a better life. I agree, we do have a problem. But are strict laws which only result in incarceration the answer? No, absolutely not. What laws are in place to HELP illegals? Very few… if any. There is little to no encouragement for them to seek citizenship, and most certainly cannot seek legal wages. They are forever on the run and will always be more of a burden to our society when living in this manner.

However if we pass laws to help illegals, rather than being a burden to society, they become a benefit to our society. Many families come to America in hopes that their children have an ample opportunity to have an education which is much better than where they came from. Just imagine for a moment that illegal children are legally able to graduate from high school, then college, become a citizen, find a full time job – then they will be required to pay taxes just like any US born citizen. However, if illegals are forever forced to run, earning cash pay from jobs here and there – which many families actually do fairly well – will we ever see their income came back to society in the form of taxes? Hell no. In fact, you will end up paying more taxes because the laws will only lock them up, and even though they may be a private prison, your tax dollars still must go to fund these prisons… while, once again, the stockholders walk away with your money, laughing the whole time at the magnificent job they’ve done a duping most of America.

Time to wake up folks. Anonymous has. Just the other day, they defaced the website for the Florida-based GEO Group, the second-largest (CCA is the largest) operator of private prisons.

The domain http://www.geogroup.com was replaced Friday morning with a black screen headlined by the symbol “#antisec,” a term for the Anti-Security Movement, which is affiliated with the online coalition known as Anonymous.

The hacked site also featured a photo of Mumia Abu-Jamal, a former Black Panther whose death sentence for the 1981 murder of a Philadelphia police officer has since been converted to life imprisonment. Abu-Jamal’s case has received international attention from opponents of the death penalty.

“While most folks are suffering under the economy, many billions of dollars are being funneled into this sinister conniving alliance of capitalist and statist forces,” stated a message on the hacked site. “What they did not figure into their plans was a determined effort to shut them down.”

The site is now back up.

Here is our country, one of the most advanced societies in the world, yet our prison population far exceeds, per capita, that of any other country in the world. Why? Because we are the only country with privately owned facilities where laws are passed so people may profit off of the inmates. More inmates, more profit.

Remember, very soon, laws may be passed which may easily put you in a privately owned and ran facility. 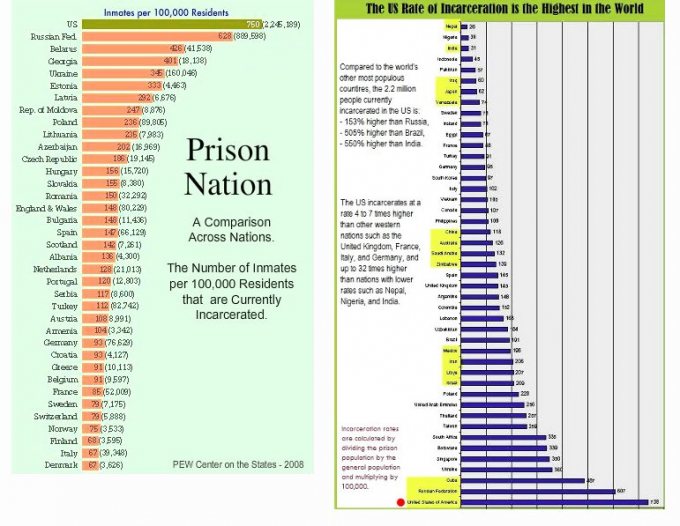