What a year 2011 was when it came to weather.  Blizzards, tornadoes, flooding, droughts and hurricanes.  Here is a photo journal through the extreme weather of 2011 shown in chronological order.  Geologic disasters (tsunami, earthquakes, etc) will be posted in a separate article, as well as the fires in the US Southwest (in which I live.)

Rising floodwaters spread through the low-lying suburb of Depot Hill in Rockhampton, in eastern Queensland on January 2, 2011. (MECHIELSEN LYNDON/AFP/Getty Images)

A huge swath of the United States is affected by a winter storm that brought layers of dangerous ice and blowing snow, closing roads and airports from Texas to Rhode Island in this February 1 satellite image. The storm's more than 2,000-mile reach threatened to leave about a third of the nation covered in harsh weather. Ice fell first and was expected to be followed by up to two feet of snow in some places. (NOAA/AP) 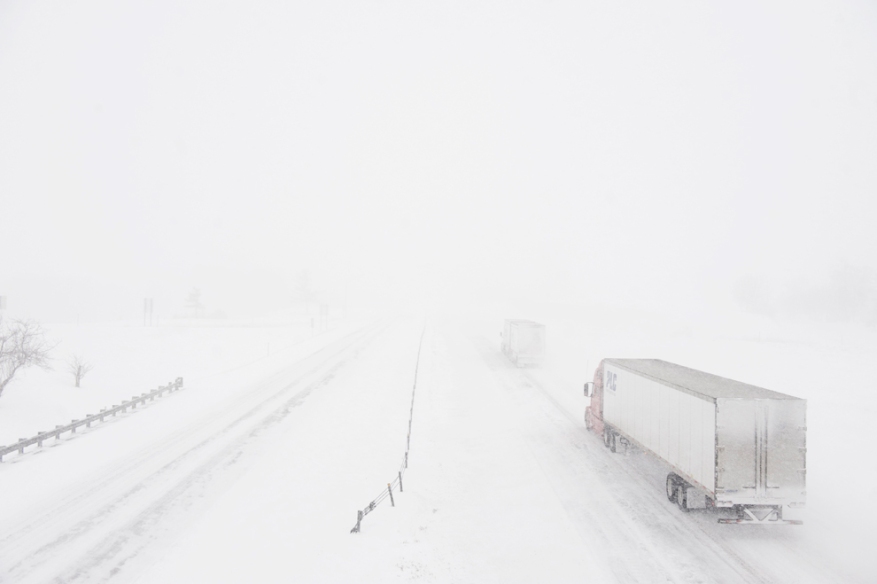 Trucks disappear into the snow as they travel along I-70 February 1 near Boonville, Mo. Potentially the worst winter storm to hit Missouri in decades began its trek across the state, dumping more than a foot of snow while delivering freezing rain, winds and dangerously cold temperatures. (L.G. Patterson/AP)

Hundreds of cars were abandoned on Lake Shore Drive in Chicago after a winter blizzard of historic proportions wobbled an otherwise snow-tough Chicago, stranding drivers for up to 12 hours overnight on February 2, 2011. (Kiichiro Sato/AP)

Snow accumulates in a truck that was stranded and left open on Lake Shore Drive February 2 in Chicago. A winter blizzard of historic proportions wobbled an otherwise snow-tough Chicago, stranding hundreds of drivers for up to 12 hours overnight on the city's showcase lakeshore thoroughfare and giving many city schoolchildren their first ever snow day. (Kiichiro Sato/AP)

The Quad Cities River Bandits and the Peoria Chiefs play a game April 20 inside Modern Woodmen Park in Davenport, Iowa. T he rising flood waters of the Mississippi River surround the stadium which is protected by a flood wall. (Paul Colletti/The Dispatch/AP)

Cars stand submerged in overflow water from the Wolf River on McMiller Road in Memphis, Tenn. May 10, 2011. After weeks of rising to historic levels the Mississippi River reached a crest just shy of the forecast 48 feet at the Memphis gauge. "It's going to meander around that level for the next 24 to 36 hours," meteorologist Bill Borghoff said. "We're going to pretty much hold onto the crest for a while." (Mike Brown/Associated Press/The Commercial Appeal)

Destroyed vehicles are piled on top of one another in the parking lot of the Joplin Regional Medical Center in Joplin, Mo. May 22. (Mark Schiefelbein/AP)

A shelf cloud containing a thunderstorm approaches a tornado-ravaged neighborhood in Joplin, Mo. May 23. (Charlie Riedel/AP)

Residents of Joplin, Mo, walk west on 26th Street near Maiden Lane after a tornado hit the southwest Missouri city May 22. (Mike Gullett/AP)

On July 5th a historic dust storm, or haboob, approaches downtown Phoenix, AZ. The wall of dust, which was estimated to be 70 miles long and over a mile high, moved at speeds of 35mph and had gusts up to 60mph. (Mike Olbinski Photography) 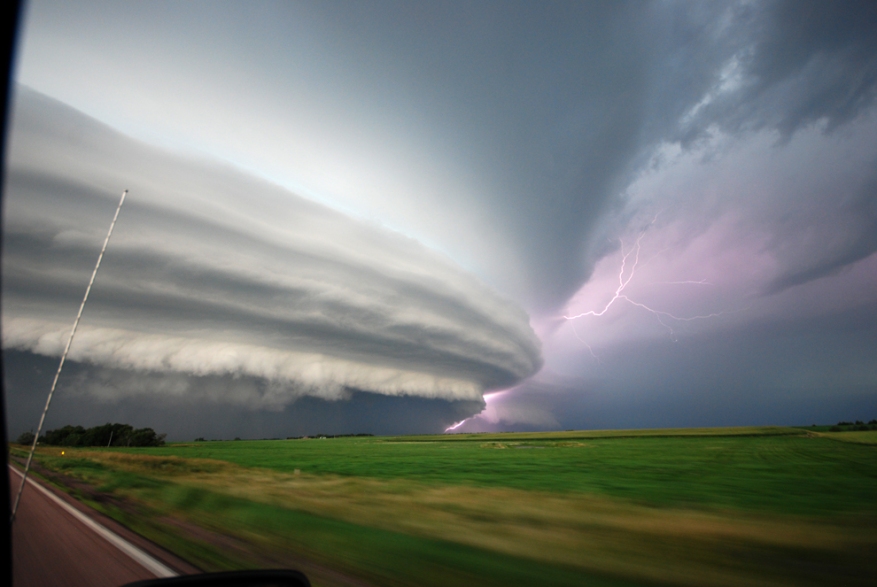 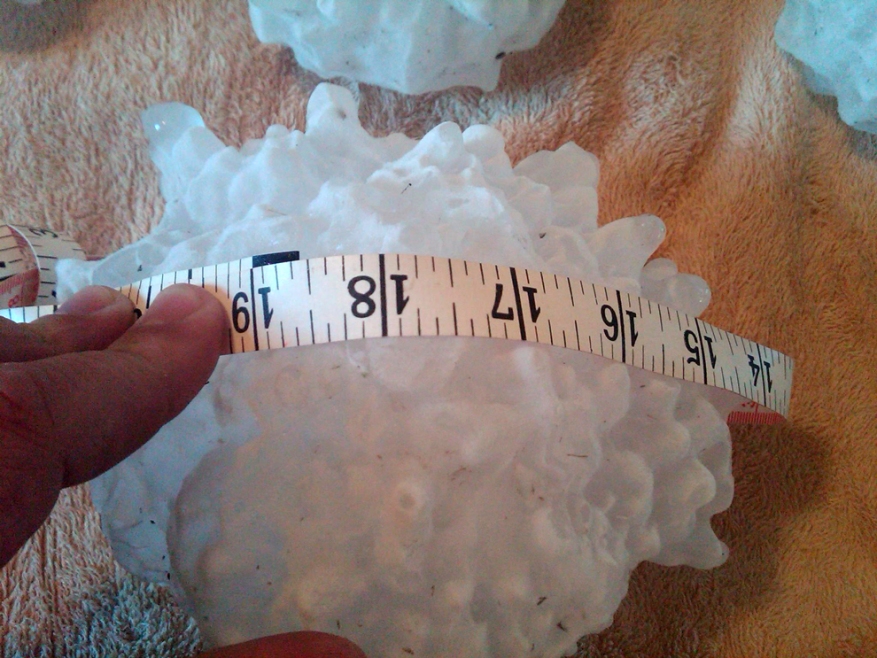 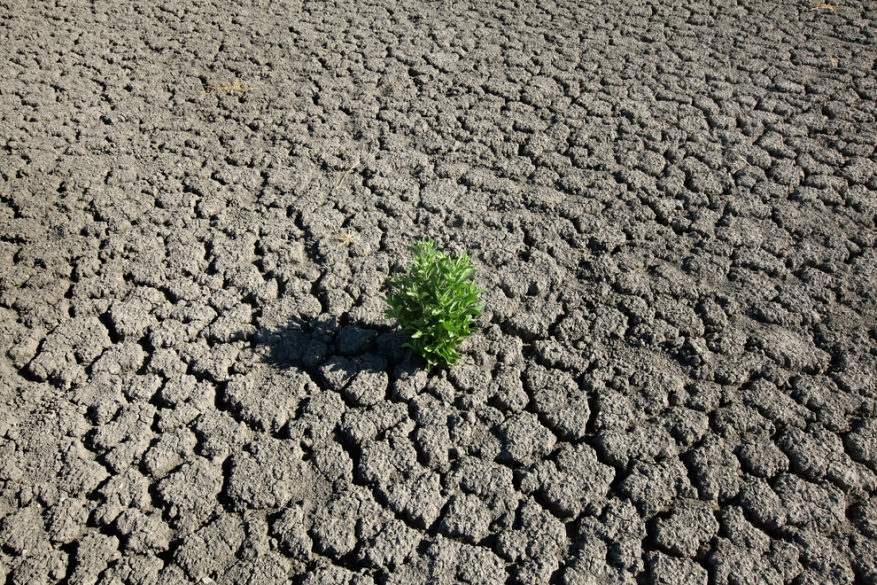 A weed grows out of the dry cracked bed of O.C. Fisher Lake on July 25 in San Angelo, TX. The 5,440 acre lake which was established to provide flood control and serve as a secondary drinking water source for San Angelo and the surrounding communities is now dry following an extended drought in the region. The lake which has a maximum depth of 58 feet is also used for boating, fishing and swimming. The San Angelo area has seen only 2.5 inches of rain this year. The past nine months have been the driest in Texas since record keeping began in 1895, with 75% of the state classified as exceptional drought, the worst level. (Scott Olson/Getty Images) 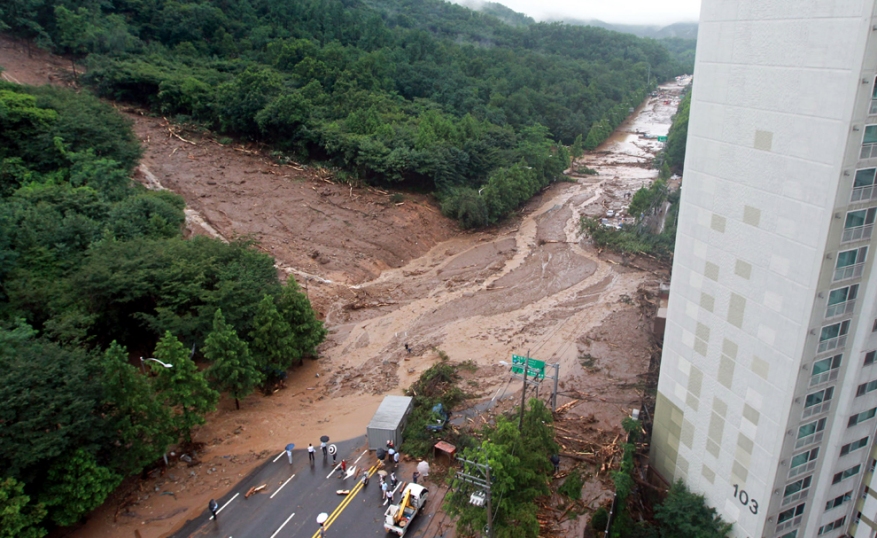 A landslide covers the street opposite the damaged apartment building in Seoul on July 27, 2011. (Jang Seung-Yoon/AFP/Getty Images) 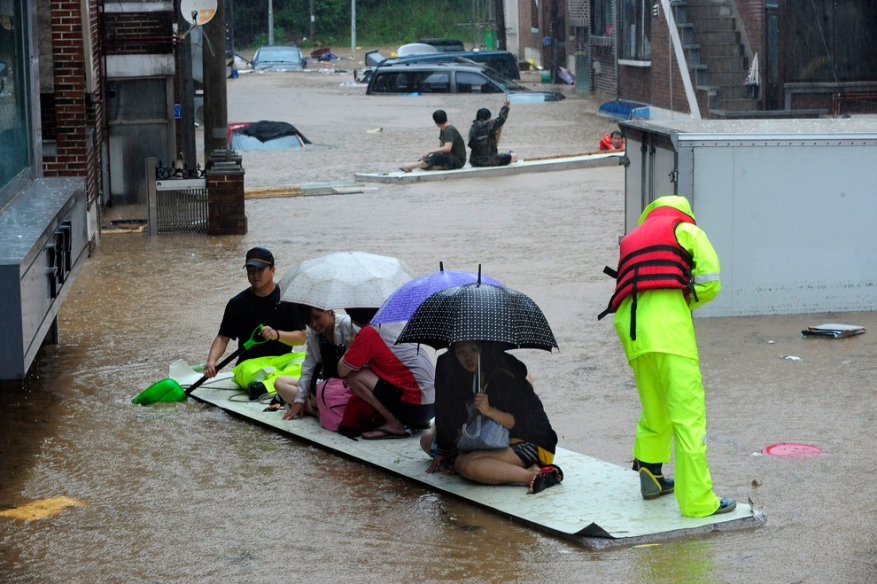 Residents on a makeshift raft evacuate from a flooded area in Gwangju, South Korea on July 27, 2011. (Newsis/AP)

Pakistan Fllods. Onlookers perched on a damaged bridge watch a man use a rope to cross the river in Chakdara, Pakistan August 3, 2010. (AFP/Getty Images)

In this handout image provided by NOAA, Hurricane Irene churns of the coast of the Carolinas on August 26, 2011. (NOAA via Getty Images) 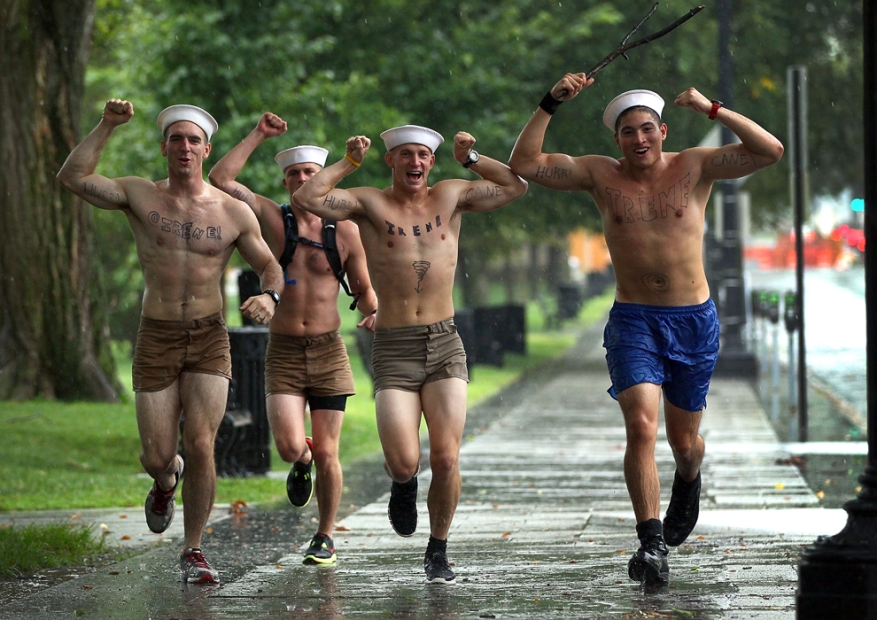 A group of sailors run through the streets of the nation's capital during pouring rain in advance of the arrival of Hurricane Irene on August 27, 2011 in Washington, DC. (Win McNamee/Getty Images)

Billy Stinson (left) comforts his daughter Erin Stinson as they sit on the steps where their cottage once stood before it was destroyed by Hurricane Irene Aug. 28 in Nags Head, NC. The cottage, built in 1903, was one of the first vacation cottages built on Albemarle Sound in Nags Head. Stinson has owned the home, which is listed in the National Register of Historic Places, since 1963. "We were pretending, just for a moment, that the cottage was still behind us and we were just sitting there watching the sunset," said Erin afterward. (Scott Olson/Getty Images)

Floods in China. Policemen and residents run as waves from a tidal bore surge past a barrier on the banks of the Qiantang River in Haining, Zhejiang province Aug. 31. (China Daily/Reuters) 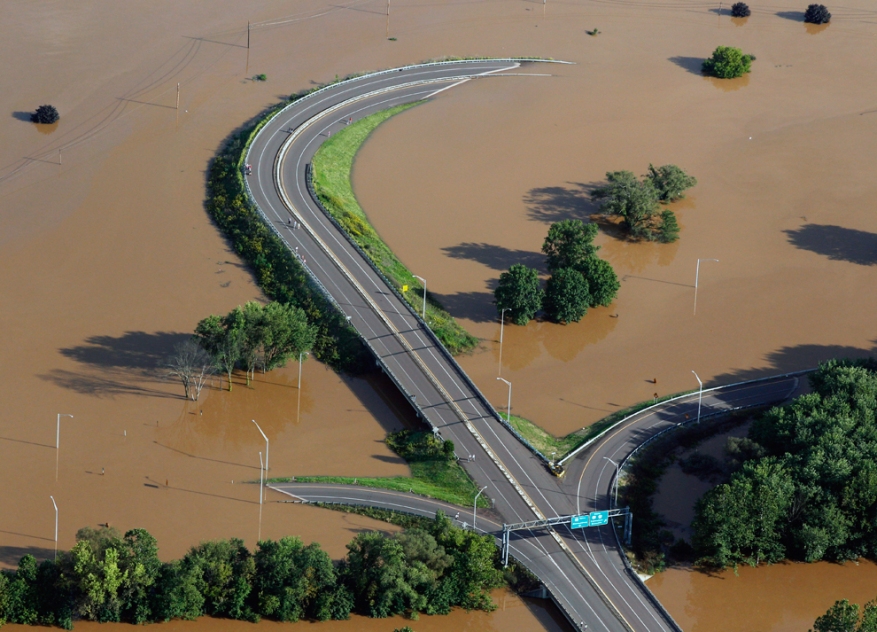 Surging waves hit against the breakwater in Udono in a port town of Kiho, Mie Prefecture, central Japan, Sept. 21. A powerful typhoon was bearing down on Japan's tsunami-ravaged northeastern coast approaching a nuclear power plant crippled in that disaster and prompting calls for the evacuation of more than a million people.

Residents carry a pig down a flooded street during typhoon Nesat in San Mateo, Rizal, east of Manila on Sept. 27. Typhoon Nesat brought the Philippine capital to a near standstill with its vast rain band also flooding remote farms and vicious winds tearing roofs off buildings in coastal towns. (Noel Celis/AFP/Getty Images) 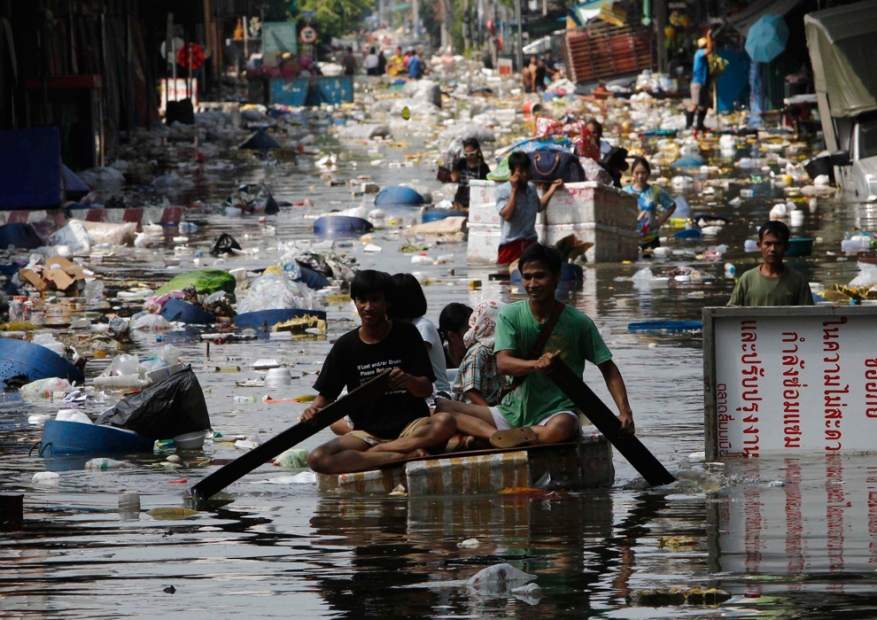 People push their belongings through floodwaters during an evacuation from a flooded market in Bangkok October 24, 2011. (Sukree Sukplang/Reuters)

Floods in Bangkok. Thai residents make their way across a flooded street close to the rising waters of the Chao Phraya river on October 30, 2011 in Bangkok. (Daniel Berehulak /Getty Images)

Source for all picture:  Boston.com The Big Picture