Annabel Lee of Double Dip Politics has written a most phenomenal article where she loosely portrays herself as an attorney defending American woman. It is an honor to to feature this post as my guest post today – but please, do not stop reading her work here. Go check out Annabel’s site… her writing is impeccable in every area. The content, choice of words and grammar, as well as expressing her views fairly – which is often a very difficult task to accomplish. Personally, I know I go off the deep end from time to time, and I can just hear people’s eyeballs rolling in the heads after I hit “publish.”

Please allow me just a few moments to share what I have discovered about Annabel Lee. I just recently subscribed to her site, and through her writings, comments and email exchanges, I have been witnessing a rare talent. Just like every journalistic writer, Annabel has her opinions and viewpoints, but is gifted with presenting them in a respectful, factual manner rather than the biased viewpoints seen particularly in the articles written by the main stream media. In the short time I have been following and reading Annabel’s work, her wisdom and open-minded nature shines. One very important step she takes before her fingers tickle her keyboard is the thorough manner in which she researches, processes and analyzes prior to writing. Annabel made it a point to [painfully] read the books written by our current Republican Candidates in order to better understand who they are. Personally, I am not sure I would have the stomach to do so. Annabel’s style is not unlike playing chess as she plans her current writing by planning her moves (research) in advance. Speaking of chess… Annabel used this very same analogy of playing chess in an earlier post, “Is The GOP Intentionally Tanking The 2012 Election For 2016 And Beyond?” Her “Tanking” article explains her theory that “the Republican party appears poised to sacrifice a pawn today to win a bigger prize later.” Check it out, too.

Returning now to her post I am featuring here, “The Case of ‘Republicans v. Women’“…. Annabel’s writing is nothing less than extraordinary as she blends together creativity, current facts and a dry sense of humor. Annabel Lee will captivate you from her very first word all the way to her final period.

Now, without further ado, I present to you Annabel Lee’s “The Case of ‘Republicans v. Women'”:

The Case of “Republicans v. Women”

Ladies and gentlemen of the voting public, I am here today to defend American women in today’s proceedings. The case of Republicans v. Women will reshape our nation. Throughout the proceedings, I will prove the Republican party hates women. I will present evidence in this case showing the hatred these men have against women.

You will decide the fate of a party, and a nation. Remember, you have been instructed to use the facts of the case, not rhetoric, talking points, or false ideological promises. You are to examine the evidence in this case and make an informed decision. The ultimate outcome depends on you.

Exhibit A is Newt Gingrich, who has a history of talking down to women. This is a man who cheated on his first wife with his second wife. He repeated the process from wife two to wife three. Gingrich has spoken about empowering men, at the expense of women. He has denigrated women’s issues throughout his career, making sexist comments against Hilary Clinton and Nancy Pelosi.

Allow me to introduce Exhibit B, hormonal birth control. The Republican party, which for years signed laws mandating insurance companies pay for birth control, has made another about-face. In the past week, the GOP has spoken out about birth control being a terrible thing. Rep. Darrell Issa (R-CA) held a committee meeting to talk about birth control. He selected five men to speak on the issue. The one woman who was invited to speak was barred from the proceedings.

Republicans are attempting to say that birth control is unnatural. Humans have been using contraception in different forms since 2000 BC, according to historians. Jesus would have known about birth control during his era, particularly consorting with the whores of the period. It is not mentioned in the Bible. If Jesus had problems with birth control, it would have been expressly stated. It wasn’t.

This brings us to Exhibit C, a blue v-neck sweater vest with a brown stain on the back. If there ever was one man attempting to push the rights of women backwards, it is Sen. Rick Santorum, currently running for President of the United States. Santorum has written and spoken about banning all contraception in America. He believes the sexual revolution of the 1960s was a mistake. His book is littered with references to women belonging inside the house, cooking and cleaning, and are only good for raising children.

Santorum has waged a war on birth control, female sexuality, and women in the military. Santorum’s claim against women serving in the front lines is “men may get emotions”. I served in the military. I have seen the men after attacks in Iraq and Afghanistan. They are emotionally invested in those men, but understand their jobs. I’m sure women could do the same job, despite what Sen. Sweater Vest states.

Now, on to Exhibit D, the State of Virginia. Virginia decided to ban hormonal birth control with their personhood bill, and turn a miscarriage into a murder investigation, while sanctioning medically unnecessary practices. In Virginia, any woman who wants an abortion must have a foreign object inserted into her vagina against her will. This is called rape. Naturally, raping women to take pictures of their fetuses is considered a plan to stop abortions. The GOP pushed through this legislation against Democratic objections.

Next, Exhibit E, the amendments defeated by Virginia Republicans. One amendment to ensure birth control was not banned was voted down. Another amendment would have allowed doctors to opt out of performing invasive transvaginal ultrasounds if it put the mother’s health at risk. The GOP voted that down as well.

That takes us to Exhibit F in our case, Rick Santorum supporter Foster Friess. During a television appearance on Rick Santorum’s behalf, Friess made a tasteless joke. “Back in my days they used Bayer aspirin for contraception. The gals put it between their knees …”. Adding to Friess’s problem is his lack of awareness regarding Santorum’s abhorrence to contraception. For the man funding Santorum’s campaign to hurt his candidate, while not knowing the candidates positions, is embarrassing.

Ladies and gentlemen, you have seen the evidence.  I leave you today with these last tidbits of wisdom. Women currently make up 53 percent of the population in America. Women make up 51 percent of the voting public.

It is clear the GOP hates women. Now, the final decision is yours. I rest my case. 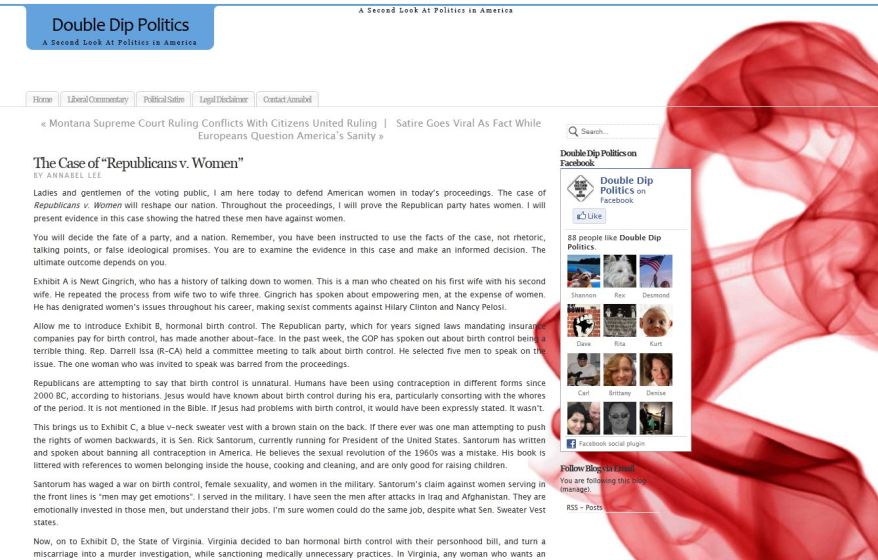