Henry Rollins’ Letter to Ann Coulter: “Be my slave” and “Shut the f* up” 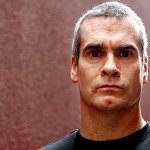 Since Black Flag disbanded, Rollins has hosted numerous radio shows, such as Harmony in My Head on Indie 103, and television shows such as The Henry Rollins Show, MTV’s 120 Minutes, and Jackass. He had a recurring dramatic role in the second season of Sons of Anarchy and has also had roles in several films. Rollins has also campaigned for various political causes in the United States, including promoting LGBT rights, World Hunger Relief, and an end to war in particular, and tours overseas with the United Service Organizations to entertain American troops.

Rollins stated in a 1998 interview with NY Rock, “I don’t want a wife and I don’t want kids. I’m 36 and if I met a woman of my own age and married her, I’d also be marrying her former life, her past.” [Wikipedia]

Even better than all that he’s done listed here is this “letter” he penned to ultra-right-wing Conservative Ann Coulter. Although this video has been around a while, just like a fine wine, it gets better with age. Transcript below the video.

You used to be fun; at least funny. At least gently and amusingly insane, but girlfriend, you’ve changed! The thousand-yard stare you’ve acquired in the last couple of years says lonely nights, too much wine and insecurity about the future of your career. Where to now, my sweet fascist? Another one of your silly books? More hilarious appearances on Hannity & Colmes? Bill Maher has to be tired of you by now.

You’re anything but stupid and by now , you must see the writing on the wall. You’ll never have a real place with the Beltway in crowd, as they see you as a northeastern, hickoid, pro wrestler, Nascar type with a degree from Cornell. I mean, really, Ann; where can it go from here? Ann, I think I have the answer, in fact, I know I do.

I want to hire you, Ann. I want you to come and work for me. I want you to be my “Ann Friday,” my housekeeper, beekeeper, floor, chimney and minesweeper, my window-washing, grocery-buying, dinner-cooking, obsequious, submissive concubine-domestic.

You will laugh at my jokes, celebrate my victories and lament my failures. You will praise my friends and vow great harm upon all who oppose me. You will treat me like a god, a guru, a mentor – and the best night in the sack you’ve ever had. You will carry my bags, wash my cars, walk my dogs and turn your savings over to me. You will massage Susan Sarandon’s aching shoulders, whip up vegan delights for Hanoi Jane Fonda, and loofah Barbra Streisand’s stretch marks.

But most of all, Ann, you will just shut the fuck up.

I can offer you a life of obedient servitude on my compound; in your time with me, you will learn much. You will learn that America is made up of people from all races, walks of life and sexual orientation and that it’s all OK. You will learn to be patient and kind. You will learn the meaning of the word “respect” and memorize every line of Caddyshack. You will listen to The Ramones, Black Sabbath and the Brides of Funkenstein. You’re a figure of fun and I plan on having fun with that figure. You will learn who your daddy is, that’s for sure.

But mostly, Ann, you will just the fuck up.

Come on, Anne, ya fuckin’ psycho; let’s do this!