Oh, Donald. Yet another faux pas with your damn tweets — must have missed spelling in school. Probably too busy being a bully to others. I guess he just cannot get his fill of the word ‘president.’

In a post to Twitter this morning, the president-elect slammed China for its seizure of a U.S. underwater drone in the South China Sea two days earlier.

“China steals United States Navy research drone in international waters – rips it out of water and takes it to China in unpresidented act,” he wrote, misspelling the word ‘unprecedented.’ (source)

Naturally it brought on a flood of tweets. The best, though, is Merriam-Webster adapting their #WordOfTheDay to include Trump’s ‘unpresidented’….

And here are some of the better responses to Merriam-Webster’s tweet…. 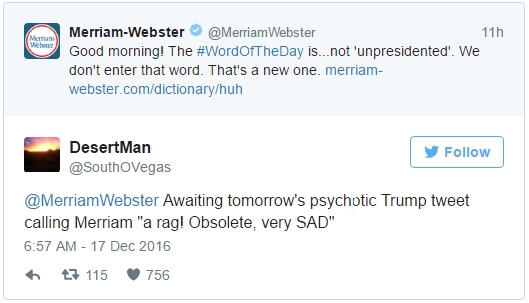 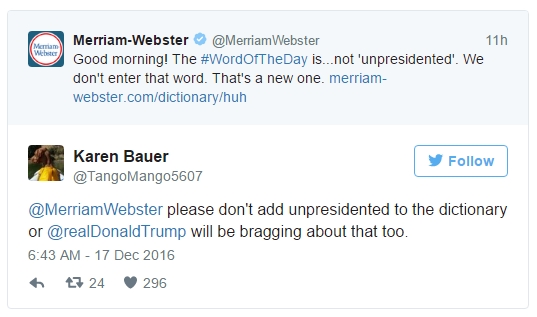 And here is the new word ‘unpresidented’ along with it’s definition as provided by this Tweeter….

It comes down to the fact that Trump is just going to have to learn to slow down and let his staff review and proof anything — but that will never happen. It will be an embarrassment to our country, but Trump is who he is. I just hope one day it all comes back on him.