The Internet is Switching to IPv6 Offering 340 Undecillion IP Addresses

Undecillion? That was the first time I had heard that “number.” When searching the definition, some were vague and undecillion basically means a number with a LOT of zeros behind it. Technically, I found the definition to be:

The cardinal number equal to 10 to the 36th power.

Chiefly British. The cardinal number equal to 10 to the 66th power.

LOL… when I was young, a zillion was big! Not anymore.

To very briefly explain, currently our internet is ran by IPv4 (Internet Protocal version 4) and because of the development of smart phones, we are literally running out of IP addresses. Each computer, laptop, tablet, phone, etc… anything that accesses the internet must have it’s own unique IP address. Currently IPv4 offers 2 to the 32nd power, or 4,294,967,296 IP’s, to be exact. Meh… considering our National Debt is $15.7 trillion, then 4.2 billion IP’s really is not that much (that is supposed to be humor, just in case it didn’t work).

So then, how many IP addresses will the new IPv6 give us? (I wonder what happened to IPv5??)…

The difference between the v4 and the v6 that allows such a much larger volume of IP’s is that the v4 is a 32-bit system. And the v6 (I still want to know what happened to v5) is a 128-bit system.

Well, like most people, I find the new number of IP’s is a rather overwhelming number – very difficult to actually “visualize.” So I thought I would try to interpret this number in distance so that we may all get a better idea as to what we are looking at here. So away we go!

How far to the moon?

Well, what about the sun?

Still, a not even close to the undecillion number we’re looking for in distance. So… inches to the sun?

(per my calculations) it’s a lot, but still not large enough. Can you believe that?

So, let me try to sum this up for you…

If you travel in space and drop an IP address behind you every single inch, like a IP-bread-crumb trail, it will take you a trip to Pluto AND back WITH a short side trip to eventually run out of IP addresses.

Whew… that was a very long trip.

Below are a few charts and the bit comparison for you geeks (I’m a geek and proud of it, dammit). And for those who would like to read about this world transition from IPv4 to IPv6 (where’s v5?), then check out the article in CNet “Internet powers flip the IPv6 switch (FAQ).” It is very informative.

Now, I must go find Mickey and Minnie so we can take a trip with Pluto to Pluto. BTW… what IS Pluto now that it’s not a planet? Meh… it’ll always be a planet to me. That’s what Mrs. Dixson said in 2nd grade and she knew everything! 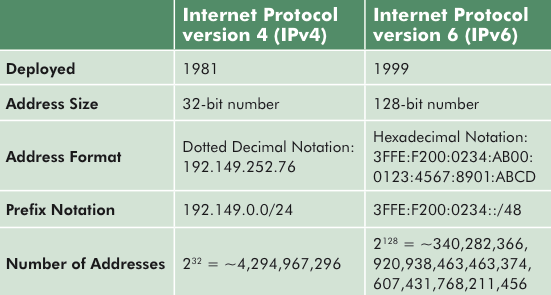