Don’t Listen to the Media, They Are a Bunch of Drama Queens

Unless you have been hiding under a rock, you are quite aware of the presidential election going on between incumbent President Barack Obama and former Massachusetts governor Mitt Romney. Depending upon which news channel you are watching, the polls outcome will vary. I do want to briefly mention, though, that the polls after the third debate are unsettling…. For the most part in that debate, Romney sat back on his laurels and agreed a lot of what Obama has been doing with foreign policies. Romney was a “yes sir, no sir” debater that night. Then to see some polls favor Romney after this debate? Something smells fishy.

That is the the skinny on the popular vote. On the other hand, our media is saying very little about the Electoral College (here I will abbreviate as “EC”) votes. Why? Because Obama is heavily favored to win the EC, and the media does not want either candidate to run away with the election early. If one candidate takes off and is clearly the most likely winner, then many viewers will go back to their normal lives and pay less attention to the election. Fewer viewers, less money. Simple.

If you did not know, the Electoral College takes precedence over the popular vote. Remember Bush v Gore in 2000? I was so angry that year. I ranted on about how the Electoral College was past it’s time, and with modern voting technology the EC is no longer necessary. I felt that the popular vote was the country speaking out loud – and I still feel that way. With this election there is a higher-than-normal chance that we may be seeing another EC-win Popular-loss except flip-flopped in favor of the Dem’s… that is, besides all of Romney’s flippin’ and a-floppin’. Obama wins the EC and Romney, the popular vote. This time around though, I won’t be ranting on like I did in 2000, but I am sure the Republicans will. They’ll claim “foul” and do whatever they can to counter the results. Personally, I feel Obama will win both, but the popular vote will be very close. I have to wonder what it would be truly like if the RepubliCons had not been suppressing votes in many states. Especially the swing states – and it appears that didn’t work as they had hoped. Without the suppression, it would be an Obama landslide.

There is a website called “270 to Win” because the first candidate to reach 270 EC votes, wins. Although the election is still upcoming, there are many states which are very apparent on which direction they will go. Others lean, while a few are a coin toss. This site allows you to choose the final outcome based upon choosing the winner for the swing states. I have been in this site for hours now working out the most likely result, the worst case scenario, and a few other possibilities. The first map below is a screen shot of my prediction of the outcome based upon the current polls – and I meant to give New Hampshire to Obama but show it here as Romney’s. The second map below is showing the swing states. Although you can change any state results that you want to. 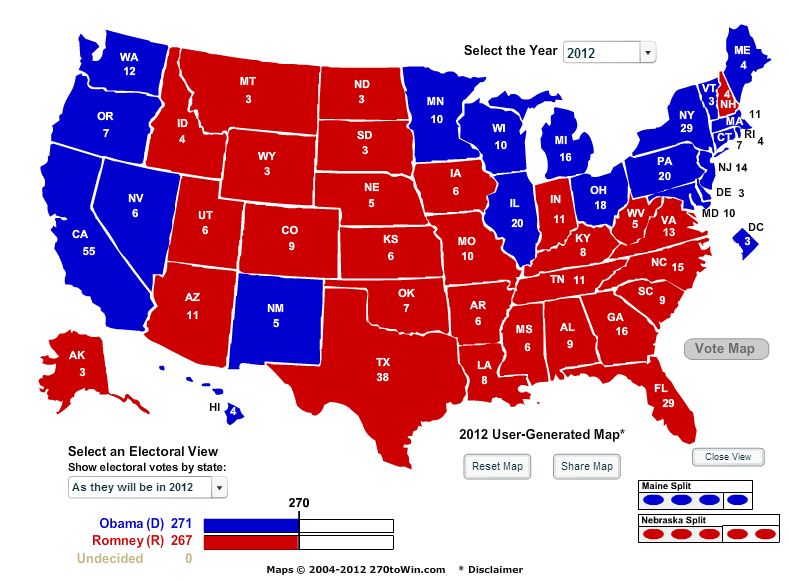 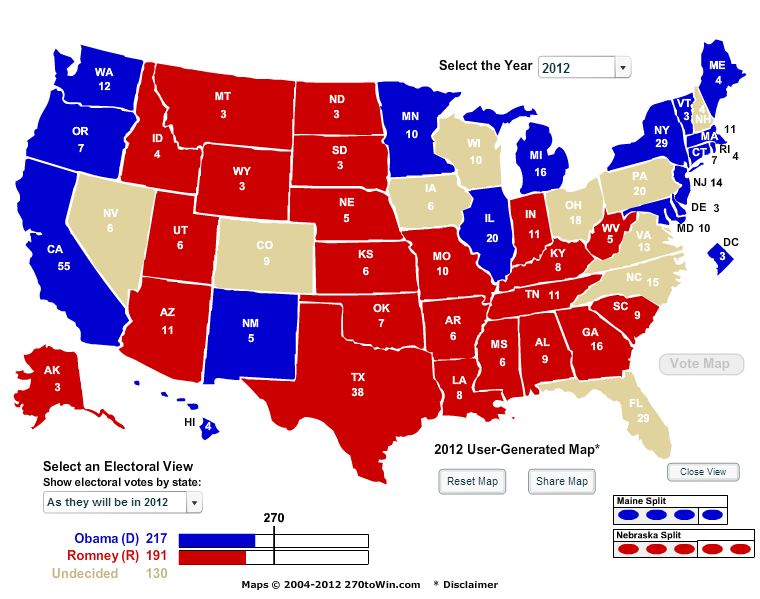 Ohio and Florida are two key states and winning one or both will have some interesting results. If Obama wins both Ohio and Florida, there is still a slight chance that Romney could win… but only if he wins ALL the OTHER states. I doubt that would happen.

Now, on the flip side (there’s that word again), if Romney were to take both Ohio AND Florida, there is still a chance that Obama could win the EC, barely but a chance. The president would not need to win all the other states like Romney would have to, but he would have to win the vast majority. Depending upon how many votes in that state, Obama could still win if he takes all the other states except for two. In case of a tie, then the House votes – and anyone anti-Romney does not want that.

In a nutshell, the Electoral College is strongly favoring Obama for a second term as President of the United States. The media is simply acting like a bunch of drama queens by carrying on about the popular vote. One day Romney may be in the lead, then the next day it’s Obama, and so on. This is keeping the viewers glued to their TVs and computers so they can see if their candidate is currently in the lead.

Although I still am not a fan of the Electoral College, I have to admit that this year it is a welcome thing. I have been a horrible mess this election by even contemplating the possibility of Romney winning as he will destroy everything our country has gained. Let me emphasize “destroy.” I can deal with most of the conservative ideologies being put in action by the GOP, but Romney in office is much more than that. It would be devastating for a huge majority of the people in this country. Not to mention the 30 million who now have insurance, thanks to President Obama, and would have that yanked out from under them by Romney. Just for pure spite. Romney cares naught about the people.

This year, the Electoral College has helped me from having a stroke. I know it is not over yet, but at least I have relaxed a bit.

I recommend checking out “270 to Win” website. There is a lot of useful information there, plus see what results your picks will have. Just remember, these picks are not like the NCAA picks – lives literally depend upon these states.

A side note… it is “Electoral,” not “Electorial.” Apparently that is a common mistake which really ticks some people off. LOL… I saw a few websites with some very clear opinions….