A Hodge Podge of Republican Idiocy

Here are a few various items from the Republican Idocy Tank….

“I purchased a gun when I was a young man. I’ve been a hunter pretty much all my life.” Romney’s campaign later said he’d been hunting twice, once when he was 15, and once in 2006 at a Republican fundraiser.

“I’m not a big-game hunter. I’ve made that very clear. I’ve always been a rodent and rabbit hunter. Small varmints, if you will.”

“I saw my father march with Martin Luther King.” Romney’s campaign later admitted that they didn’t march on the same day, or in the same city.

“We should double Guantanamo!”

“Hugo Chavez has tried to steal an inspiring phrase ‘Patria o muerte, venceremos.’ It does not belong to him. It belongs to a free Cuba.” –invoking a phrase that translates to “Fatherland or death, we shall overcome,” which Fidel Castro has used to close his speeches for years, and which is associated with Cuban oppression.

.
Mr. Foster Friess, the super pac funder behind Rick Santorum tells Andrea Mitchell how contraceptives should be used on MSNBC on 2/16/12. The best part is Andrea’s reaction:

.
Rush Limbaugh (Radio): “…as I’ve been saying the past couple of weeks, if you’re looking for a conservative who is the least corrupted, who has the least number of periods of wandering off the reservation, if you’re looking for a conservative who’s never sat down with Nancy Pelosi on the couch for any reason, you get Rick Santorum. And people know this.

.
Andrew Brietbart (Publisher-Videographer) loses it at an Occupy rally. Now, everyone behave yourself, you filthy freaks!

.
Grover Norquist (which this is more frightening than humorous):

“All we have to do is replace Obama. …  We are not auditioning for fearless leader. We don’t need a president to tell us in what direction to go. We know what direction to go. We want the Ryan budget. … We just need a president to sign this stuff. We don’t need someone to think it up or design it. The leadership now for the modern conservative movement for the next 20 years will be coming out of the House and the Senate.”

.
Of course, the GOP Kicks Women Out Of Contraception Debate – Says It’s About Religion Not Women 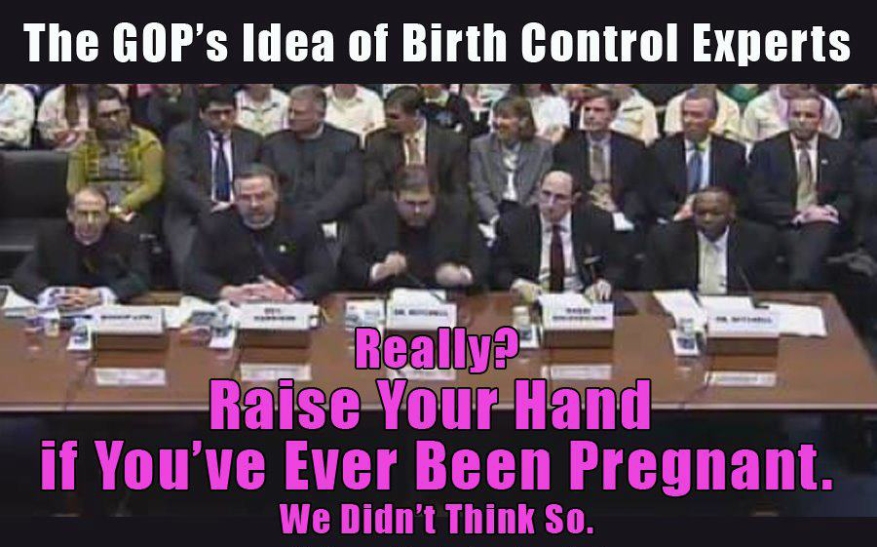 Yet another Obama-hater who is damned determined to “prove” that Obama is not an American-born citizen. On March 1st, he will proudly produce what has been mostly hush-hush about the probe, but has promised his “birther” posse will deliver a “shock” with its findings on the conspiracy theory that’s been continuously debunked for several years now. According to the sheriff, two twins — the Nordyke twins — were born on August 5, 1961 at the same hospital as the president. August 5, 1961, is one day after President Obama was (allegedly — if you ask a “birther”) born in Hawaii. The twins’ birth certificates can be found on microfiche documents that the sheriff says are on file with the Hawaii Department of Health, or some Hawaiian government agency.

I’m waiting for Bigfoot, the Loch Ness Monster and Yeti to be revealed.

.
And people vote Republican… why????