This is horrible.  A young man served our country in Iraq, came home alive only to be taken down by the police of the country of which he served.  The irony of it all.  A very sad state out country has become.

A U.S. Marine veteran is in a critical condition in hospital tonight after being injured by a police gas canister during last night’s Occupy Oakland protests, which saw running battles break out between authorities and protesters as a crowd tried to reclaim an encampment.

Scott Olsen, 24, of Daly City, California, an Iraq veteran and member of Veterans for Peace, suffered a skull fracture and brain swelling after being hit in the head during the riots. Officers had cleared the site of demonstrators around 12 hours earlier in a dawn raid where at least 85 people were arrested.
_____________________________________

(Below)  The Occupy Oakland protesters, a par of the Occupy Wall Street movement, carry away a man, who was hit by a tear gas canister shot by the Police, near the Oakland City Hall on October 25, 2011 in California. AFP Photo / Kimihiro Hoshino (Photo credit should read KIMIHIRO HOSHINO/AFP/Getty Images)

Police gave repeated warnings to demonstrators to disperse from the entrance to Frank Ogawa Plaza in the Californian city before firing tear gas canisters into the crowd at 7:45pm on Tuesday evening. There were reports from officers that some protesters had been throwing rocks.

‘It’s terrible to go over to Iraq twice and come back injured, and then get injured by the police that are supposed to be protecting us,’ Mr Olsen’sroommate Keith Shannon told The Guardian, adding that he served in Iraq in 2006 and 2007 before leaving the military last year.

‘Oakland Police Department fired a tear gas canister at his head, fracturing his skull,’ said Mr Olsen’s friend Joshua Shepherd. A spokesman for Highland General Hospital confirmed that Olsen was being treated for injuries sustained during the protest. Oakland police have not yet commented.

Mr Olsen is also an Iraq Veterans Against the War member and served in 3rd Battalion, 4th Marines. His parents live in Wisconsin and they are expected to fly out to see him, reported The Guardian.

The scene was reportedly calm but tense early this morning as a crowd of hundreds of protesters from last night dwindled to just a few dozen.

Police had announced on Tuesday night over a loudspeaker that those who refused to leave could be targeted by ‘chemical agents’. One woman in a wheelchair, who was struggling to breathe, had to be helped away by friends while another woman, hit by a canister, was carried off.

Jerry Smith, 35, said a tear gas canister had rolled to his feet and sprayed him directly in the face. Mr Smith said: ‘I got the feeling they meant business, but people were not going to be intimidated. We can do this peacefully, but still not back down.’

The protesters were trying to make good on a vow to retake an encampment that Occupy Oakland activists had remained in for 15 days, until police evicted them early on Tuesday.

(Below) Bloodied: Violence broke out in running battles between police and protesters as they tried to retake the camp in Frank Ogawa Plaza which was earlier in the day.

(Below) Heavy-handed tactics: A woman in a wheelchair covers her mouth after police in Oakland, California, released tear gas to disperse Occupy Wall Street protesters.

(Below) Warnings: Occupy Wall Street protesters flee after police deploy tear gas to disperse a crowd of around 400 that gathered in Oakland city centre.

(Below) Not giving up: The Occupy Wall Street campaigners returned to try to retake the camp that had been cleared earlier in the day in Oakland.

(Below) Night lights: Police prepare to enter Occupy Oakland’s City Hall encampment on Tuesday night after they cleared the protesters on Tuesday morning.

(Below) Bring it: A group of police officers stand ready near Oakland City Hall, as Occupy Wall Street demonstrators rally against the early morning police raid. 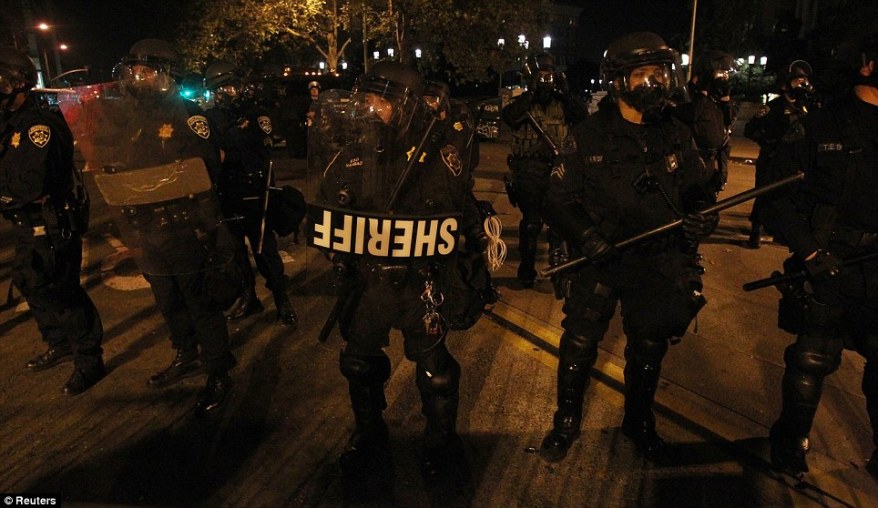 (Below)  Dispersing: Police fire tear gas into a crowd of hundreds of Occupy Oakland protesters on Tuesday night as they tried to retake a camp. 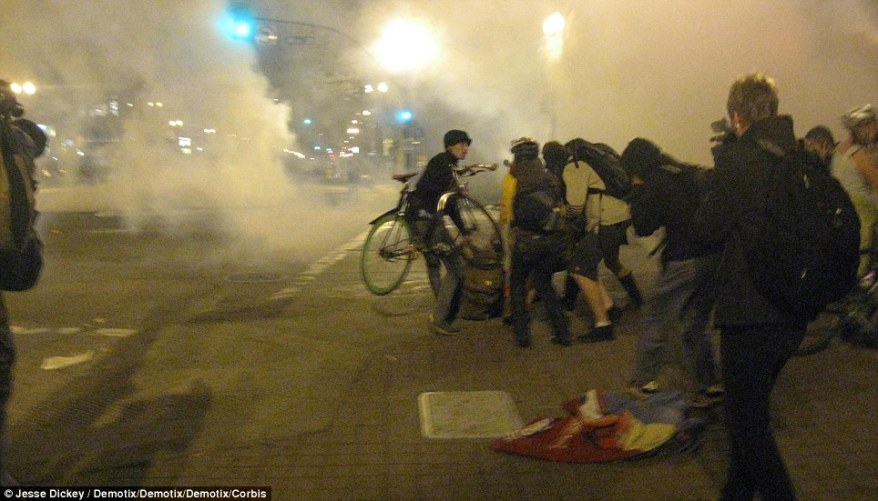 (Below) A policeman is hit in the neck with red paint after the protest turned angry when the encampment was cleared and arrests made.