I have created a petition on the Whitehouse.gov website in their section called, “We the People.” Here anyone is allowed to create any petition they wish. When the petition reaches 100,000 signatures in 30 days, then the White House will review and at least respond to the petition. It used to be 25,000 signatures, but thanks to every Billy-Bob that petitioned for the state to secede from the Union, the White House had to increase the number of signatures. I do not necessarily believe that miraculously this petition would be placed before Congress, but at least it catches the attention of both governmental and civilian that we are aware of the profits and exports of fuel and we demand regulation and reform.

Below is what I wanted to post in my petition, but alas… they’re limited to 800 characters. That’s pretty slim. So I am linking my petition back to this post so anyone who wishes may read more information about why I have created this petition. And the reverse holds true, too. Please go to my WhiteHouse.gov “We the People” petition and sign it. Do not worry about identity. To sign a petition is surprisingly minimal. No address, no promise of your next-born child. A name and email, but no requirement of proof that the name you provide is actually yours (an FYI for those who are really paranoid that the government is watching every move we make).

In full, what I wanted to post in my petition:

WE PETITION THE OBAMA ADMINISTRATION TO…. 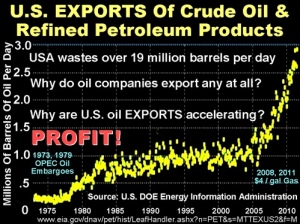 In 2011, fuel was our number one export [1][2]. The oil companies are bringing in record profits from exporting fuel to other countries, such as China whose demand is high. Yet Americans sit here in our own country and watch the prices at the pump steadily increase. The government needs to implement strict export policies. Set a cap so when our fuel prices are higher than $2.00 per gallon – whatever the barrel equivalent will be – then the oil companies are not allowed to export fuel. No fines as these companies rake in so much profit, fines are meaningless to them. Ban exporting. We need to take care of our own country first. So long as gas prices at the pump are at $2.00 or less, then oil companies are allowed to export to their heart’s desire – or stockholder’s desire is more aptly put.

An article dated 1/29/13 from CBS Minnesota [3] quoted Gail Weinholzer of AAA in Minneapolis, “As of right now we’re getting a bit more from Canada. It’s a bit more expensive.” Of course it is more complicated that this, but why are we buying from Canada at a higher price when our US companies have fuel? Simply because it is more profitable for the companies to export than sell domestically. This must be regulated else we will continue to see the prices rise at the pumps to ridiculous amounts.

Many will cry out that Capitalism means privatized companies are allowed to sell their product to whom they wish and that a regulation like this is socialism. No it is not. There must be some sort of control kept else if any private corporation is free to do what they want, then our country will fall apart while the CEO’s and stockholders laugh all they way to the foreign banks. Our banks used to be regulated and our economy flourished, poverty was very low, and the middle class was strong. Then in the 1980, we began deregulating our banks. Derivatives were conceived which provided a fast profit but were highly unstable. Glass-Steagall [4] was repealed which allowed commercial banks to “play” with their securities – with “our” money. In other words, the banks began making their own rules.

Then in 2008, we saw the results of these massive amounts of deregulations — the economy collapsed. Interesting enough, Iceland’s banking and economy nearly mirrored ours by deregulating their private banking industry. However, when their economy collapsed in 2008 along with our economy, Iceland held their bankers responsible and many are now in prison. The Iceland government forgave the home owners who found themselves owing more than their home was worth. In other words, Iceland held their privatized banks responsible. Now Iceland’s economy has bounced back stronger than ever. [5]

Why am I discussing banking when this petition is about exporting fuel and our price at the pumps? Because this is a perfect example of what will happen if we do not stop and regulate our fuel exports. History will repeat itself. These oil companies care naught about the people of our country, nor even our economy overall. Not when they are able to reap record profits by exportation. Capitalism fails without rules and guidelines otherwise known as regulations.

Additionally, this is the same plan the oil companies will do should the Keystone Pipeline be completed. Many Americans believe by putting this pipeline in place, our fuel prices will then drop. That is simply not true. The oil companies will continue to export as that is where the money is for them. Please, before we see $5 at the pump, start regulating exports.

[1] Insider Fortunes: And the Number One Export for the US is….
[2] USA Today Money: In a first, gas and other fuels are top U.S. export
[3] CBS Minnesota: Why are Gas Prices Going Up?
[4] Wikipedia: Glass–Steagall Act
[5] Wikipedia: Inside Job (a documentary)

(FYI.. I watched the entire docu “Inside Job” last weekend. Very informative as to what caused our banking collapse of 2008. I highly recommend watching it.)